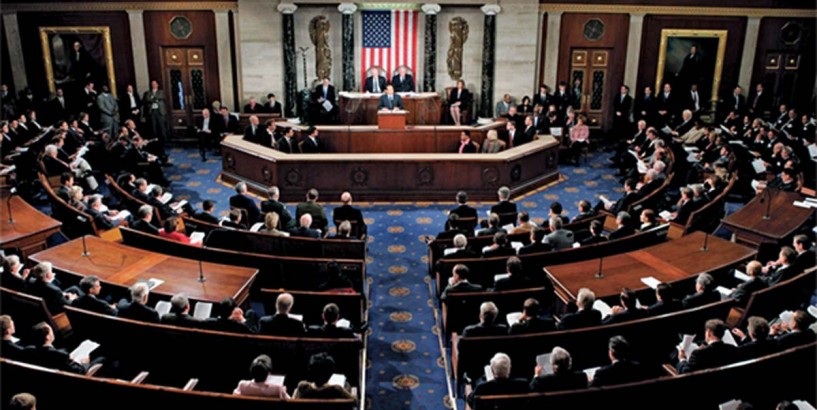 “It has become painfully clear that more must be done to educate Americans about the horrors of the Holocaust and the threat posed to the Jewish community through the use of Nazi hate symbols,” said Jewish Democratic Council of America executive director Halie Soifer. By Jackson Richman, JNS

applauded the U.S. Senate passage on Wednesday of the Never Again Education Act, which seeks to expand Holocaust education in the United States.

The legislation, which passed the U.S. House of Representatives in January, now goes to U.S. President Donald Trump for his expected signature into law, would expand the U.S. Holocaust Memorial Museum’s (USHMM) education programming to teachers nationwide, requiring the museum to develop and disseminate resources to improve awareness and understanding of the Holocaust and its lessons.

The Senate version was slightly different from the U.S. House of Representatives one, which the Senate ultimately passed, in that the former had the U.S. Department of Education, not the USHMM, oversee the expansion of Holocaust education in the United States.

Under the passed bill, $2 million would be allocated annually for this year and each of the next four years to the Holocaust Education Assistance Program Fund, administered by the USHMM’s governing body, the U.S. Holocaust Memorial Council. Private donations for the fund would be permitted.

“Particularly in light of the recent use of Nazi imagery by right-wing protesters praised by President Trump, we are pleased to see that the Never Again Education Act passed the Senate unanimously this week after it was held by at least one Republican senator,” Jewish Democratic Council of America executive director Halie Soifer told JNS, referring to Holocaust imagery and slogans being featured at demonstrations over state and local restrictions to the coronavirus pandemic, and Sen. Mike Lee (R-Utah) placing a hold last week on the bill after it was discharged from the Senate Energy and Natural Resources Committee.

“It’s very rare for a substantive bill to move like this without going through committee,” a Hill aide told Jewish Insider. “[Lee] and his staff wanted to review the text.”

Ultimately, no changes were made to the bill, the Hill aide told the outlet.

“It has become painfully clear that more must be done to educate Americans about the horrors of the Holocaust and the threat posed to the Jewish community through the use of Nazi hate symbols,” said Soifer.

The Republican Jewish Coalition applauded the bipartisan nature of the passed legislation.

“The men and women of the United States Senate deserve credit for setting aside their differences to clear the way for swift and unanimous passage of this much-needed legislation,” said RJC executive director Matt Brooks in a statement.

“As survivors pass on, there has never been a more important time for Holocaust education,” tweeted the American Jewish Committee, applauding a few of those who led the effort to get it passed in Congress—Sens. Jacky Rosen (D-Nev.), Kevin Cramer (R-N.D.) and Rep. Carolyn Maloney (D-N.Y.).

We applaud the Senate for passing the bipartisan Never Again Education Act and are thankful for the dedicated leadership of @SenKevinCramer , @SenJackyRosen , and @RepMaloney .

As survivors pass on, there has never been a more important time for Holocaust education.

In the Senate, Marco Rubio (R-Fla.) and Richard Blumenthal (D-Conn.) introduced the bill along with Rosen and Cramer, while Rep. Elise Stefanik (R-N.Y.) introduced it with Maloney in the House.

“Senator Rosen has been building consensus on the urgency of quality Holocaust education within her caucus and across the aisle since introducing the Never Again Education Act in the Senate,” said Hadassah’s national president, Rhoda Smolow, and its CEO and executive director, Janice Weinman, in a statement. “Today, her hard work paid off.”

In a statement, Christians United for Israel founder and chairman John Hagee said “if there exists a silver bullet to defeat the spread of bigotry and hatred, it is education. Through this legislation, teachers around the country will have federal support in their efforts to stamp out anti-Semitism by teaching about its abhorrent consequences.”

Combat Anti-Semitism movement director Sacha Roytman-Dratwa said in a statement, “By approving this act, members of the United States Senate have transformed the phrase ‘Never Again’ into real and purposeful action. We know that the only way to fight the darkness of anti-Semitism, hatred and discrimination is to teach the light of tolerance and respect. The Never Again Education Act breathes new life into this struggle at a time when we need it the most.

“We applaud the members of the Senate, from both sides of the aisle, who put their political differences aside in order to approve this important legislation,” he continued. “In doing so, they have sent the critical message that anti-Semitism is not a partisan issue and that people of all religions, faiths and backgrounds must unite around the goal of ending the hatred and bigotry which plagues our society.”

In a statement, the Conference of Presidents of Major American Jewish Organizations lauded that the measure “will spread awareness of the Shoah to the next generation by creating and funding the Holocaust Education Assistance Program with $10 million over five years. These funds would go toward ensuring that educators have the resources they need to teach these critically important lessons.”

“Anti-Semitism is an insidious force in our country, as well as globally, and our elected officials have a responsibility to ensure that future generations understand the horrors of the Holocaust to prevent it from ever happening again,” said World Jewish Congress president Ronald S. Lauder in a statement. “I commend Reps. Maloney and Stefanik, and Sens. Rosen, Cramer, Blumenthal and Rubio for working on both sides of the aisle to give our country’s educators the resources they need to teach their students about the darkest era of history. This legislation is a tremendous step forward toward prioritizing and standardizing Holocaust.” 12, 11, 2020 0 Israel’s ambassador to the US slams the New York Times for ‘pioneering State’ May 7, 2020 0 Sign with Auschwitz slogan displayed at Chicago protest against stay-at-home orders