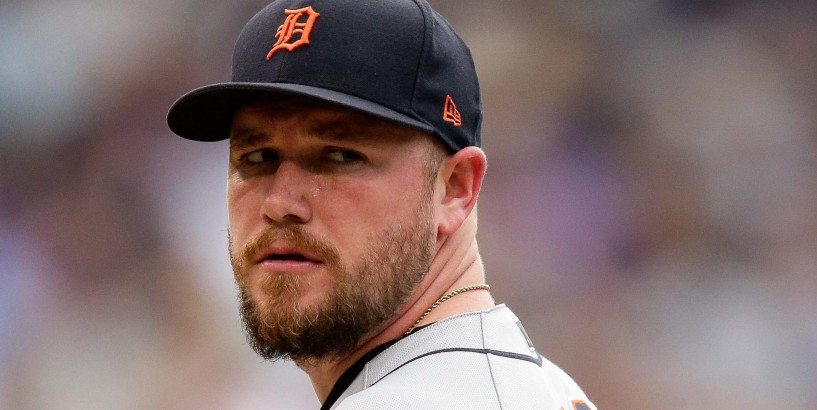 Tigers pitcher lives in camper at spring training: 'One with BBQ pit'

LAKELAND, Fla. — Alex Wilson has turned spring training into a grand camping adventure. Wilson, who rejoined the Detroit Tigers on a minor league contract, is staying in a 42-foot, fifth-wheel camper in a parking lot outside Joker Marchant Stadium. But I hesitate to use the term camping . Camping is going to a state park, sleeping in a tent, next to a fire pit, battling mosquitoes and eating roasted marshmallows and s’mores. But this? This is not camping. “This thing is like a luxury studio apartment,” Wilson said. His rig has a full-sized refrigerator, several TVs and three king-sized beds. “Literally, it’s right outside the fenced-in area,” Wilson said. “You can’t miss it. I’m the one with the barbecue pit behind it. A few guys have come over and hung out a little bit.” It took Wilson 17 hours to pull it from Texas. “It saves a lot of money,” said Wilson, who has made $5.3 million in his career before taxes, according to Spotrac. “I’m used to paying $4,000 to $6,000 in rent here per month, per spring. And I’m paying $350 bucks a month. The city (of Lakeland) is allowing me to hook up to their electricity.” Give the guy credit for being creative. And adventurous. Wilson, 33, pitched for the Tigers from 2015 to 2018, appearing in 246 games. But he was a pitcher without a team last winter when he called Tigers assistant general manager David Chadd. “David and I have had a really good relationship over the years, and I called him,” Wilson said. “I said, ‘Is there a way to make this work?’ “And we made it work.” Wilson signed a minor league contract with an invitation to spring training. He made his debut on Tuesday, throwing a bullpen while working on a new arm slot. “I thought I threw really well,” Wilson said. “It’s one of those things where the feel is getting there. It’s better each time out. And I’m still over the top as well. The stuff that is my bread and butter feels really good.” Ask Tigers manager Ron Gardenhire about Wilson, and he will start ragging on the fact that Wilson went to Texas A&M. “I love the guy,” Gardenhire said. “He’s one of my favorite players. But there is that little thing between us. He’s an Aggie and I’m a (Texas) Longhorn. If you want me to say real positive things about him, maybe he can get some people out.” There is only one downside to staying in a camper, outside the stadium: He is sharing the parking lot with a circus. Cirque Italia's Water Circus will run from Thursday to Monday in the parking lot outside the Tigers’ facility. A big tent and several other RV campers are spread throughout the parking lot. “Two nights ago, it was pretty noisy,” Wilson said. “That would be the only downside. The city workers come in pretty early with the dump trucks and street sweepers. I mean, we are up pretty early too, so it’s not horrible.” He bought the trailer in September. “I’ve been looking for two years, thinking about it," Wilson said. "Now that my kids are in school and my family is not with me full-time, I pulled the trigger and decided this is what we wanted to do as a family. We’ll take trips in it now.” jseidel@freepress.com. @seideljeff.