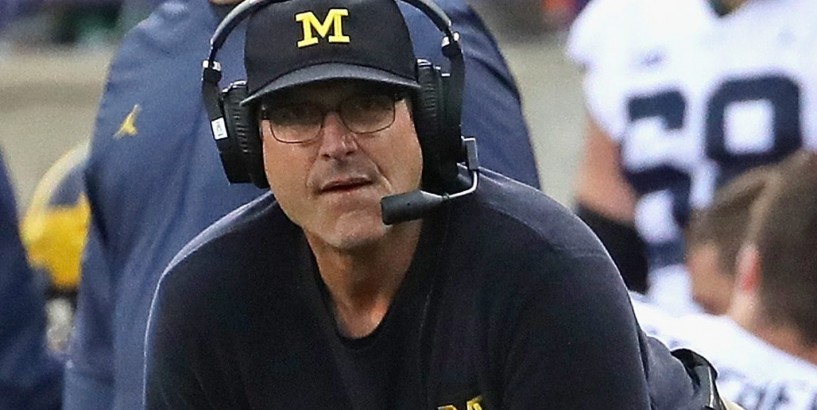 Jim Harbaugh has a radical idea. To treat college football like college basketball, where the players have more freedom to shape their careers. In a letter he published Thursday, Michigan's football coach argued the NCAA and NFL should let college football players declare for the draft at any point they choose and remain eligible to return to school if they aren’t drafted. Currently, athletes must be three years removed from high school before they can leave for the NFL, and if they do declare, they are not allowed to come back. In other words, if a player is good enough to go pro after his freshman year, he should be able to go. This is how it works for basketball. This is how it should work for football. Now, there aren’t likely to be many freshmen ready — or good enough — to leave for the NFL. But as Harbaugh argued, it should be the player’s choice. Think of Tua Tagovailoa, the former Alabama quarterback who might have been the No. 1 pick after his sophomore season if he’d been eligible, but who had to return for his junior season and then hurt his hip. Though this isn’t just about the risk of injury. It’s about a double standard. Harbaugh’s proposal would get rid of it. We’ve long accepted that football players need three years of college because of the idea that their bodies aren’t ready for the NFL until then. That may be true in some cases. Yet shouldn’t the players, their families and the general managers of NFL teams get to decide? Harbaugh argued that the current rules — adopted in 1990 — are too constricting for today’s players, and that while they served him well in his own career, they are limiting modern players’ ability to earn a living. NFL careers last an average of three to four years. “By my 30th birthday, I was blessed and fortunate to have played professional football for seven years and accumulated enough money to put my family in a good place, with a degree that presented opportunities outside of football as well,” Harbaugh wrote. “While that was great for me and can be for many current football athletes, it may not be best for all. There are ‘early bloomers,’ capable of competing in the NFL and earning a livelihood at an earlier age.” In a field that can be brutally short, Harbaugh wants to give players more control over their timelines. And whatever else you say about his tenure at Michigan, he’s been consistent in his proposals designed to give athletes more choices. Last summer during the Big Ten’s media days, Harbaugh announced that players should have a one-time transfer exemption that allowed for immediate eligibility. He’s in favor of the NCAA’s new name, image and likeness rules. He argued that players and their families should be able — without penalty — to seek counsel from agents as long as no one is compensated. He thinks — and wrote in his letter — that players should receive five years of eligibility without a redshirt. And that if a player leaves early to pursue the NFL, he should receive a year of scholarship to come back to campus and work toward a degree. The idea, Harbaugh wrote, is to allow an athlete “to pursue his dream as a student and as a professional athlete in the timeframe that best suits his best interests of his own free will and ability.” Would this make it harder for coaches to develop continuity? Absolutely. Would this mean programs that rely on junior and senior first-round talent might lose their advantage? Maybe. But I don’t think Harbaugh is arguing this to tilt the playing field, even though competitive imbalance is an issue in college football. This is what happened in college basketball, where the best pro prospects don’t often win championships, because they leave after a single season. Consider the difference between former Duke standout Zion Williamson as a freshman and Zion Williamson as a junior. Blue bloods such as Duke horde most of the top prospects. Yet because those prospects often leave after a year, the non-blue blood teams can compete by developing lower-ranked prospects over three or four years and turning them into champions. Think Villanova. Or Virginia. Or even Michigan State, whose team of juniors and seniors beat Williamson and Duke in the Elite Eight a year ago. The same could happen in football, where a five-star recruit at Clemson or Ohio State could be good enough to leave after two years, depriving the Tigers or the Buckeyes of a player who might have become otherworldly as a junior. Would this be good for the game? Of course. Yet Harbaugh isn’t proposing more player freedom to ease competitive imbalance, or to catch up with Ohio State. This is about the players. Their families. Their education. Their choices. Their earning power. Because, as Harbaugh wrote, “many young men and their families perceive college football as preventing them from earning a living as a professional football player. That is not an unreasonable perception given the rules currently in place.” Rules that need to change. Rules that aren’t so worried about coaches and athletic directors and alumni and fans. Rules that keep up with a changing society and allow for the best among us to chase their dreams as they want. Not as we might want. @shawnwindsor.