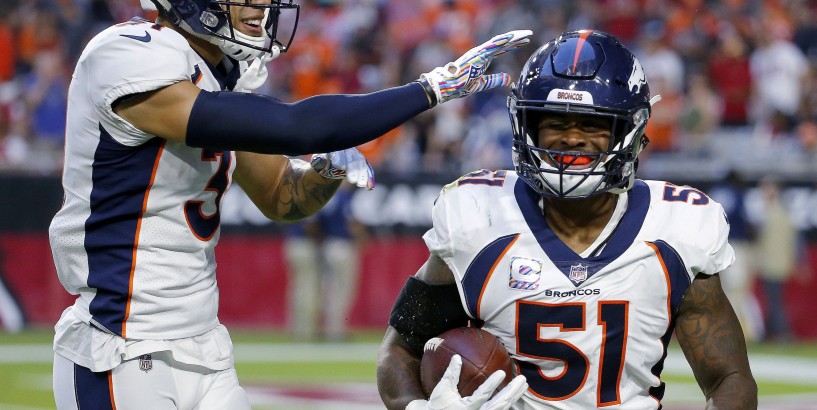 ENGLEWOOD, Colo. (AP) — Broncos inside linebacker Todd Davis practiced Wednesday for the first time since tearing his left calf muscle on the first day of training camp. Davis, who was the team's leading tackler last season, said he hopes to play against the Chicago Bears this weekend.

"That's my goal," Davis said. "I know the coaching staff has their plan for me and to make sure I'm healthy and ready to go, but my goal is to definitely be back on Sunday."

"I feel like I've been out too long as it is, missing training camp. Now, missing the first game of the season. It's been way too long for me," Davis said. "So, I'm definitely ready to go."

His biggest task this week, he said, was getting his wind back.

"I think it's just getting out there, running around, taking a lot of reps with my team, with the 1 defense and scout team, just to get as many reps as I can to get my wind up," he said. "I think when I do that, I'll be ready."

Davis was originally thought to be out three to four weeks but it turned into an eight-week absence and he said he's only been running full speed for a week.

The game Sunday pits Broncos first-year head coach Vic Fangio against his former team. Both are coming off losses on opening weekend. Chicago lost 10-3 at home to Green Bay and Denver lost at Oakland 24-16.

"Yeah, I hate it. I hate not being able to have an influence on the game," Davis said. "I feel when I'm out here I bring some more passion and attitude.

"You know, I'm nice off the field, but on the field I say some things that my mom wouldn't like me to say and act the way that my dad didn't really teach me to act. But I feel like I'm excited to get back out there."