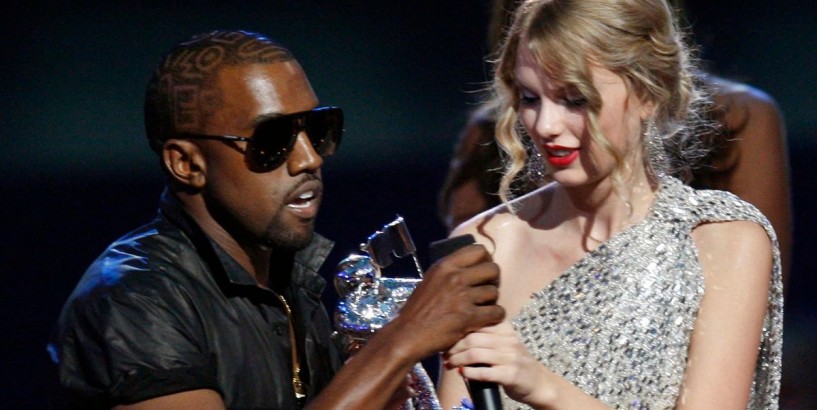 Before the 2009 MTV Video Music Awards, there would have been very few people that could have predicted that by the end of the night, Kanye West and Taylor Swift would be sworn enemies. It was seven years before the Famous track that put the pair at odds after Kanye said that Taylor had consented to him calling her a "b***h" as well as claiming that he is the reason for her global success.

This has now blown up in his face with the revelation of the leaked phone call which proved that Taylor was right with has assertions and was the victim of 'four years of hell' after Kim Kardashian had branded her a 'snake' on social media.

What started it all off though was when Taylor was awarded Best Female Video for 'You Belong with Me' in 2009, at the MTV Video Awards.

As Taylor stood on stage with her award in hand, Kanye decided to join the party, climbing the stairs to interrupt Taylor's acceptance speech.

Grabbing the mic, the rapper said: "Yo, Taylor, I’m really happy for you, I’ma let you finish, but Beyoncé had one of the best videos of all time!"

Read More Kanye West leaked call In the weeks after, Kanye spoke about what fuelled the incident during an appearance on The Tonight Show with Jay Leno.

He said: "I immediately knew in the situation that it was wrong and it was a spectacle."

The rapper then apologised to Taylor during an appearance on Ellen, saying that "sincerity and alcohol" was to blame.

Kanye said: "It’s actually someone’s emotions that I stepped on. It was very, it was rude, period. I’d like to be able to apologise to her in person."

Taylor said that a call did come in the end from Kanye, telling the ABC Radio: "Kanye did call me and he was very sincere in his apology, and I accepted that apology.

"The support I got from other artists and from the fans, and so many people sticking up for me, that’s what got me to the place where I could accept that apology.

"And I’m just very thankful that everyone showed me so much love."

The peace was not to last though and in 2010, Taylor released a song that was inspired by the actions of Kanye.

At the 2010 MTV VMAs, she performed 'Innocent' which included lyrics that were thought to be about the rapper.

They read: "It’s all right / Just wait and see / Your string of lights is still bright to me / Who you are is not where you’ve been / You’re still an innocent / … It’s okay / Life is a tough crowd / 32 and still growing up now."

That was enough for Kanye and a few years later he retracted his apology, saying that "peer pressure" was the reason why he said sorry in the first place.

He told the New York Times: "I don’t have one regret. If anyone’s reading this waiting for some type of full-on, flat apology for anything, they should just stop reading right now.

"I have, as a human being, fallen to peer pressure."

Despite a little reconciliation at the Grammy Awards in 2015, which paved the way for the conversation about Famous a year later, the feelings of 'bad blood' between the pair have not gone away and after the fallout from Kanye's song was exasperated by Kim Kardashian's reaction, it has been a messy journey to where we are now.