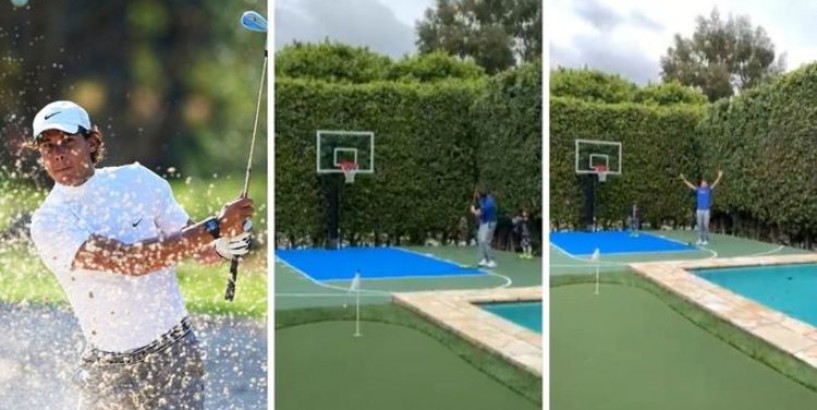 Will Rafael Nadal respond to Mardy Fish's challenge? (Image: GETTY) Rafael Nadal has been invited to partake in the #playingthrough challenge by former tennis player Mardy Fish but will need to produce something special to beat the American's effort.

Related articles Roger Federer breaks silence on coronavirus outbreak in first message Novak Djokovic & Rafael Nadal would struggle if Wimbledon had no fans With the tennis season suspended until June due to the global coronavirus pandemic, players have plenty of time on their hands.

Nadal is said to be back in his home in Porto Cristo, Mallorca training indoors while Spain is in lockdown.

But Fish has challenged the world No 2 to play golf in his enforced hiatus.

Golf.com created the viral hashtag for people to adapt their homes into golf courses and show off their skills on video.

— Mardy Fish (@MardyFish) March 20, 2020 Fish responded to a challenge from NBA star Stephen Curry with an outrageous shot, which saw him hit the golf ball off the backboard of a basketball hoop.

The ball took two bounces on the court before landing on a small putting green and improbably rolling into the hole.

As the ball entered the ball, Fish stretched his arms out in delight and he called out Nadal and NFL player Adam Thielen.

Nadal is a keen golfer in his spare time and has a friendly relationship with 15-time major winner Tiger Woods.

Tiger Woods and Rafael Nadal at The HSBC Champions tournament in China in 2006 (Image: GETTY) READ MORE Roger Federer tipped to postpone Laver Cup because of the French Open Woods watched Nadal in action at the US Open in 2019 and the Spaniard revealed his pride at the Masters champion coming to see him play.

“I've always said that I don’t have idols, but if I did I would have to say that one idol is him.

“I always try to follow him, every single shot through the whole year.

Related articles Rafael Nadal sends message to families after closing academy Roger Federer: Julien Benneteau defends French Open decision "For me, it's a pleasure to have him here supporting me. It means a lot.

"He's a big legend of sport, one of the greatest sportsmen of all time.

"I want to congratulate him for one of the most amazing comebacks of the sport ever when he won The Masters this year.”