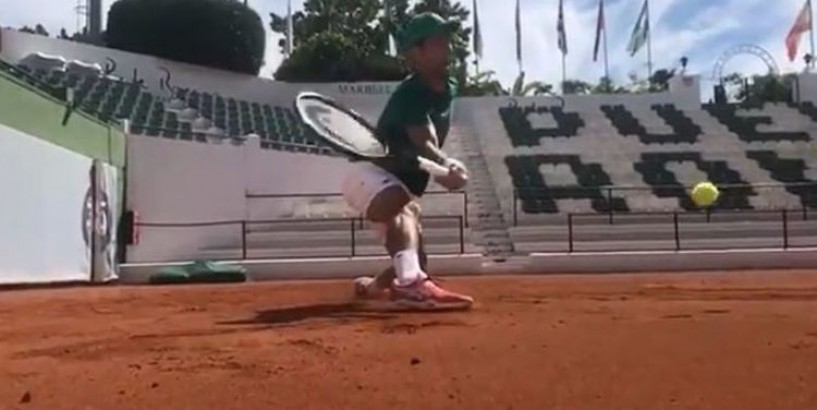 Novak Djokovic shows he's still got it with stunning athleticism

Novak Djokovic might have been in isolation for nearly three months but his incredible athleticism still remains after the world No 1 shared a video of himself sliding on a clay court to retrieve a ball.

Related articles Becker pleads for 2021 challenge to Federer, Nadal and Djokovic Roger Federer and Rafael Nadal 'suffering' most from coronavirus break After the coronavirus pandemic hit tennis, Djokovic left America and returned to Europe to his home in Marbella, Spain.

The tennis season has since been suspended and the hope is that tournaments can resume in August.

With the Spanish government enforcing a strict lockdown, athletes were unable to train outside but those measures have since been eased.

Earlier this month, Djokovic played tennis at the Puente Romano Marbella Tennis Club and shared the footage on social media.

Novak Djokovic showed his trademark elasticity (Image: Twitter) However, the hotel were forced to issue an apology because sports facilities were not approved to reopen at that time.

This week, Djokovic has returned to the resort and has been able to practise with world No 428 Carlos Gomez Herrera.

And in another video posted on his social media channel, Djokovic showed he had lost none of his skills.

The footage sees Djokovic scream out loud as he sprints to his right and then in slow motion, he stretches out his racket while on the full slide and flicks the ball back into play.

Novak Djokovic has resumed training again (Image: GETTY) READ MORE Why Andy Murray can 'benefit' from coronavirus tennis break - Becker It was the type of skill tennis fans have seen on several occasions over the years and will be hoping to see on a tennis court soon.

Meanwhile, Djokovic's former coach Boris Becker has called on the young generation of Stefanos Tsitsipas, Dominic Thiem and Alexander Zverev to make their mark on the sport in 2021.

"Maybe 2021 will see the breakthrough of the young guns because they will be a year more experienced, and the older players are another year older," Becker told Laureus.com.

“The big three have won everything multiple times. I think it's for the younger generation to step up.

Related articles Why Rafael Nadal preferred to play Roger Federer over Novak Djokovic Rafael Nadal coach on the key to surviving Daniil Medvedev comeback "The best one of the rest for the last two years has been Dominic Thiem. He's made three major finals and played beautifully against Novak, losing in five sets in Melbourne.

“I like Stefanos Tsitsipas very much, the way he presents himself on and off the court and the way he plays the game.

"From a German point of view I like Sascha Zverev a lot, you know he was in the semi-final in Melbourne and he's still only 22, so he has a long career ahead of him. There are other younger players that are fascinating.

“I would like to see the top three still at their best, and being beaten. I don't want the young generation to take over when the top three won't play anymore or are actually too old.

“I want to see a final between a 22-year-old and a 33-year-old. That would be the best thing in tennis. So guys, step up to the plate.”