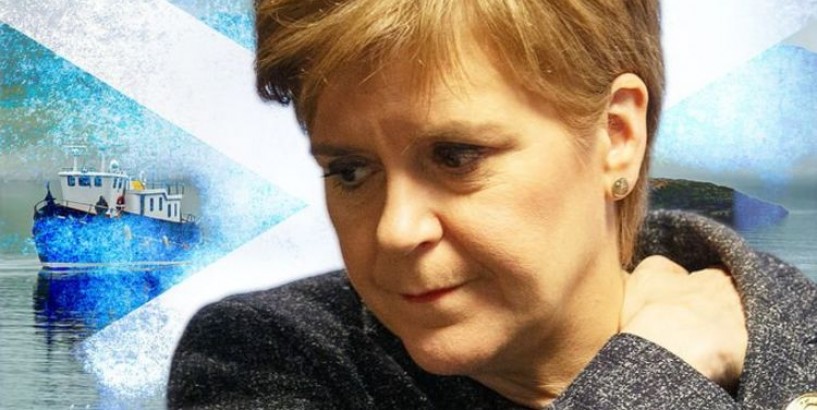 The row erupted in the aftermath of the 2016 Brexit referendum as Scotland's fishermen raged at the SNP , claiming they were missing the opportunity to claim the "grand prize" of control over waters. They argued that Brexit would end the hated Common Fisheries Policy, which imposes strict catch quotas and gives trawlers from other EU member states access to the “best fishing grounds in the world” off Scotland’s coast. At the time, First Minister Nicola Sturgeon was warning the UK Government that if Scotland could not be kept in the EU, she would push for a second independence referendum.

Related articles UK fishing fury: How bust-up sparked fears of WAR at sea Brexit: France's fisheries warning to Boris Johnson revealed But fishermen in the country warned Ms Sturgeon not to sell them “down the river”, and instead prepare to get the best deal possible for the industry in the Brexit negotiations.

The Scottish Government defied the message from its fishermen, arguing that seafood accounts for more than 60 percent of Scotland’s food exports to the EU and warned that thousands of jobs could be at risk if the UK does not retain access to the European single market.

Bertie Armstrong, the Scottish Fishermen's Federation’s Chief Executive, did admit changes to export markets after Brexit will present a “challenge”.

But he also said Europeans will still want Scottish fish and that Brexit provides an opportunity to sell to markets around the world.

SNP fisheries: Sturgeon wants to keep Scotland in the EU (Image: getty) He said: “However, we should not imagine that Brexit will simply slam the EU markets shut – trade is a two way thing, we will continue to produce the world-class products and people will continue to want them.”

Mr Armstrong added that the opportunities for the Scottish fishing industry are “overwhelmingly positive”.

He continued: “The restoration of our stewardship under international law of the best fishing grounds in the world – our Exclusive Economic Zone – brings the potential to be a world-leading force in sustainable harvesting and marketing of seafood.

SNP fisheries: Scottish fishermen wanted to take back control of their waters (Image: getty) "Anxiety is understood, but it must not cause us to lower our heads and lose sight of the grand prize."

Even with the UK out of the EU, Brussels is still trying to preserve its access to British fishing grounds.

The bloc's negotiator – Michel Barnier – has received backing by the EU27 on his red lines for trade talks with the UK – meaning the bloc will demand access to British waters in return for access to European markets.

SNP fisheries: EU countries that fish in UK waters (Image: getty) Trending This will likely lead to a stalemate however, as Mr Johnson and his government have passed a bill through Parliament which guarantees the UK is no longer part of the EU’s Common Fisheries Policy come December.

He said last month: “I want to tell our fishermen that I will fight for them. If we do not get the same access as today, we will seek compensation.

“I will not let our fishermen pay for a British vote they could do nothing about."