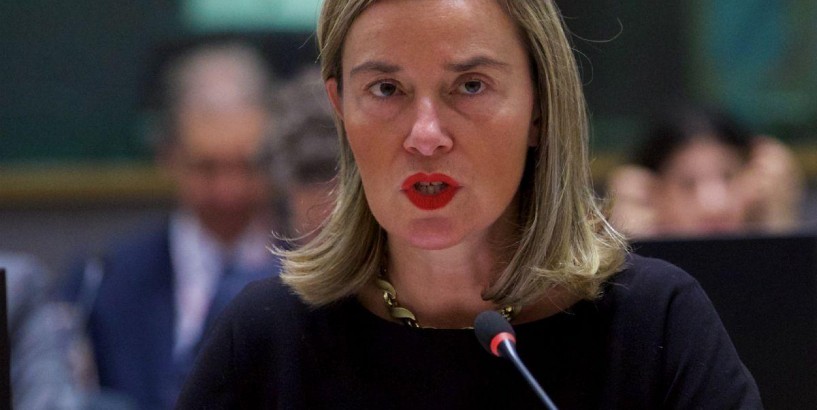 EU backs Iraq’s proposal to hold US-Iran conference July 15, 2019 at 2:12 am | Published in: Asia & Americas , Iran , Middle East , News , US High Representative of the European Union for Foreign Affairs and Security Policy, Federica Mogherini in Brussels, Belgium on 14 March 2019 [Dursun Aydemir/Anadolu Agency] July 15, 2019 at 2:12 am The European Union (EU) said on Saturday it was supporting Iraq’s recent proposal to hold a regional conference in the context of rising tensions between the United States (US) and Iran.

“The EU shares Iraq’s approach to dealing with the difficult situation in the region,” the EU’s foreign policy chief, Federica Mogherini, told reporters. She added that the EU priority was to avoid “any miscalculation that could lead to very dangerous consequences for Iraq, but also beyond.”

The EU, Mogherini reiterated, was ready to support the Iraqi regional conference idea “in all ways that could be useful.” She continued by saying that there was a need to “de-escalate and find avenues for dialogue.”

Mogherini arrived in the Iraqi capital of Baghdad, on her first visit since December 2014, for talks on the region’s issues. During her visit, the EU official met with the Iraqi officials, including the prime minister and the president.

The US blames Iran for several recent attacks on oil tankers and the two foes came close to direct military conflict last month when Iran shot down a US drone and President Donald Trump ordered retaliatory air strikes, only to call them off minutes before impact .

Trump withdrew the United States last year from a 2015 deal between Iran and world powers to curb its nuclear programme. Washington has sharply tightened sanctions on Iran, which has responded by stepping up uranium enrichment beyond limits set by the deal.

European countries do not directly support the US sanctions but have been unable to come up with ways to allow Iran to avert them.

The tensions have placed Baghdad, whose two biggest allies are Washington and neighbour Tehran, in an uncomfortable position and directly threaten its security. It relies on the US for security assistance and imports energy and vital goods from Iran, with whom its Shia majority shares religious ties. Both helped it defeat Daesh militants that overran a third of its territory at one point.