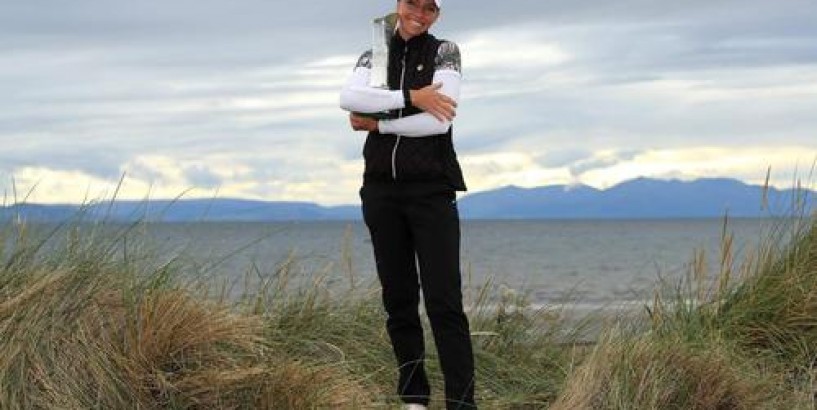 Sophia Popov awoke on Monday morning to discover that although her victory in the AIG Women's Open had propelled her up a remarkable 280 places in the world rankings, it had not earned the 27-year-old a place in two of the year's remaining three majors.

The German stunned the sport at Royal Troon by belying her status as a golfer without playing privileges on any of the major circuits with her first ever professional win.

And it is the fact that the world No 304 did not possess an LPGA Tour card that has led to an absurd situation which threatens to leave golf's newest hottest property on the sidelines when the Ana Inspiration tees off in three weeks' time.

The famous competition in Palm Springs, California - forever known to many as the Dinah Shore - was due to take place in March but was postponed at the 11th hour before the pandemic.

The Tour decided to freeze the field, while allowing for anyone in form to force their way in with a caveat that any non-exempt player in the top 20 on the order of merit would receive a late invitation.

However, while Popov's $675,000 winnings actually took her top of the Tour's money list, they do not count as she was not a Tour member at the time. So the new world No 24 is an unprecedented situation for a major-winner.

"Hopefully the LPGA sees sense because it does look so silly at the moment," an insider told Telegraph Sport . "With many of the Koreans likely to stay away because of Covid-19 - just as they did for Troon - there should be gaps that will make the solution easy to fix. But it may not be so simple for the US Women's Open."

The last major of the year is not due to take place until December and that field is already full. The feeling is that the USGA will have to add a spot to accommodate Popov, whose fairytale story from caddie to major-winner in three weeks has made headlines across the globe. Popov carried the bag for her friend Anne van Dam at the Drive On Championship last month, before earning herself a late berth in Troon and taking maximum advantage.

On Monday, Popov added yet another layer of sentiment to the tale. On Sunday night, she had talked emotionally about almost quitting the game last year, because of "injuries". She has now revealed that she contracted Lyme's Disease in her rookie year in 2014, a condition from which she still suffers.

"It was a long road to get here because there was a lot of personal research and figuring out on my own what would make me feel better, and I'm glad I got to the point where I'm feeling pretty good, and hopefully it stays that way," Popov said.

In the men's rankings Dustin Johnson has returned to world No1 after 15 months. The American won the Northern Trust by a record 11 shots on Sunday and is pole position to scoop the $15m FedEx Cup bounty at next week's Tour Championship.