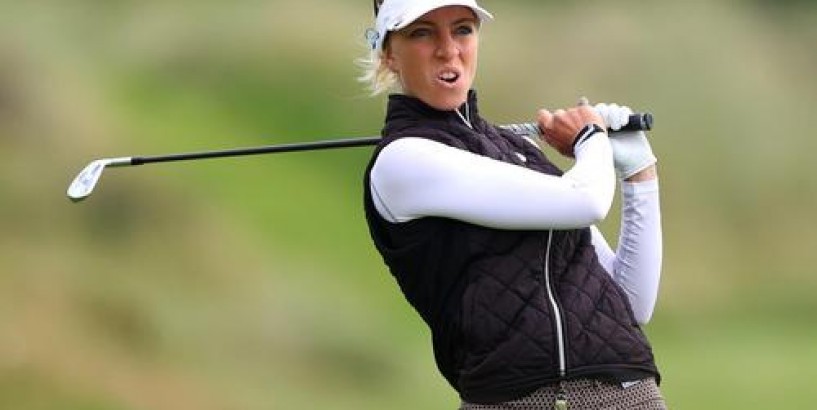 Last fall Sophia Popov missed out on securing LPGA status at Q-Series by a single shot. When the COVID-19 pandemic hit and qualifying school was canceled for 2020, Popov's time on the Symetra Tour doubled to at least two years.

And yet, by a stroke of good luck and plenty of grit, she took advantage of every opportunity that was open to her - no matter how small - and played her way into a three-stroke lead in the year's first major championship. How does a player go from winning a Cactus Tour event at Troon North in Scottsdale, Arizona, in May to leading the field by three at Royal Troon in Scotland three months later?

"Maybe this is the way it should have played out," Popov said of her unusual journey to the top of the leaderboard at the AIG Women's British Open.

Popov, 28, hit driver off the deck on the fourth hole to set up an eagle putt that set the tone for a bogey-free 4-under 67. Only three players are under par after three rounds at Troon. Popov sits at 4 under while Minjee Lee, among the best players on the LPGA without a major title, stands a 1 under alongside Jasmine Suwannapura.

Lindsey Weaver, who is using a pull cart for a fourth week in a row, joins Caroline Masson and Austin Ernst in a share of fourth.

The only player in the top 10 who has won a major is former No. 1 Lydia Ko. She trails by six.

Back to Popov, who came into the week ranked No. 304 in the Rolex Rankings, and her wild ride to the top. After winning three times on the Cactus Tour during the LPGA's five-month break, Popov returned to the tour at the Inverness Club in July - as a caddie.

While players can use a pull cart on the LPGA for the rest of the year, caddies cannot. Popov carried van Dam's staff bag around Inverness, soaking up everything she could from one of the longest players in the game with the sweetest swing. Popov particularly fed off of van Dam's positive energy.

The next week, the two best friends shared Popov's pull cart at the Marathon Classic as they were in opposite waves. Because so many international LPGA players decided not to come to Toledo, the tour filled the field with Symetra Tour players. That's how Popov got in.

She tied for ninth that week to play her way into her second Women's British Open. That stint looping for van Dam helped to change her perspective.

After the Marathon, Popov, who played college golf at USC, flew back to Phoenix to compete on the Symetra Tour where she came in second. She arrived in Scotland on Tuesday and played her first practice round at Royal Troon on Wednesday. This week she has boyfriend, Maximilian Mehles, on the bag. Mehles graduated from Kentucky in May and planned to turn professional before the pandemic hit. The pair met on the German National team.

To help keep the nerves to a minimum for the next 24 hours, Popov said she'll keep her phone on airplane mode and stay off of social media.

"Please, no one text me," she said, laughing.

Typically fast-paced about everything, Popov hopes to take things slowly the rest of the day and tomorrow. She has long thought she had the game for this type of stage, it's the space between the ears that needed the most work.

"Honestly, I have plenty of mental games that I do on the golf course," said Popov, "and a lot of them include staying quiet and no negative talk, whether it's out loud or not."

Weaver looked like she needed someone to talk to - to celebrate with - after she holed-out a spectacular shot for par from the hay on the 12th hole. Because she usually takes local caddies on the LPGA and those aren't allowed this year due to COVID-19 protocols, Weaver decided she'd go solo for this opening stretch of tournaments.

"Usually I kind of have almost a stranger there with me normally," she said, "so it's just me by myself. It's fine. I kind of like it."

Lindsey Weaver prepares to plays her third shot on the second hole at Royal Troon. (Photo: R&A via Getty Images)

Weaver's fiancé, Zach Wright, is staying with her parents this week in Ohio while he competes on the Korn Ferry Tour. He tries to keep up with her rounds on YouTube on the 45-minute commute to the course. The couple bought a house in Dallas during the break, though the pandemic created quite the hurdle.

"Less than 24 hours before we were supposed to close on our house, they were like, 'Yeah, you guys can't close on your house because you both are unemployed,' " said Weaver.

Because neither could prove when they'd be starting work again on their respective tours, Weaver's dad had to co-sign on the house. Weaver said a big reason they chose Dallas is because the job market is so great for her degree in finance, and it wasn't long ago that the Arizona grad thought she might quit professional golf.

Judging by this week, she won't be anytime soon.