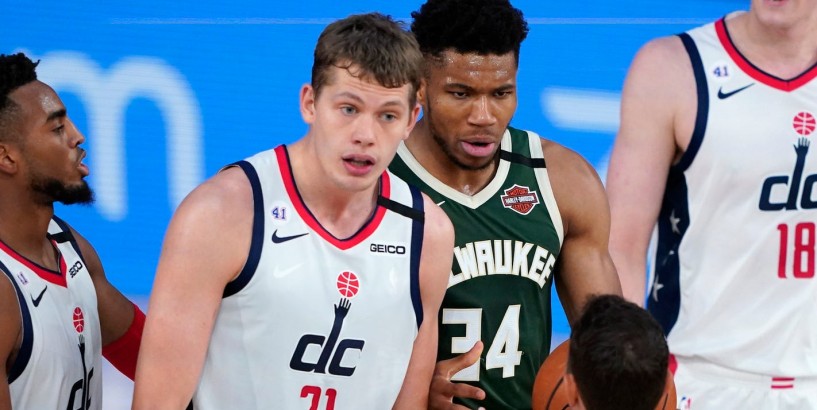 Milwaukee Bucks All-Star Giannis Antetokounmpo was ejected for headbutting the Washington Wizards' Moe Wagner with 8:50 left in the second quarter of Tuesday’s game and could face further discipline from the NBA. Antetokounmpo had just been called for a charge, and there was a break in the action when he walked toward Wagner and headbutted him. He was issued a flagrant foul 2, which calls for an automatic ejection. Antetokounmpo, who was last season’s MVP and is likely to win the award again this season, had 12 points and nine rebounds, and the Bucks were ahead 35-25 at the time. Antetokounmpo had grown frustrated with Wagner, who can agitate opponents with his play. Wagner knocked over Antetokounmpo for a rebound on one end of the court and drew the charge on the other end. Regardless, Antetokonmpo can't lash out like that. It was a meaningless game for both teams. The Bucks have the No. 1 seed locked up in the Eastern Conference, and the Wizards, who won’t be involved in the playoffs, will leave the Disney campus on Thursday after they play their final seeding game. Milwaukee completes its seeding games Thursday against Memphis in what will be an important game for the Grizzlies’ playoff chances — and the Bucks might be without Antetokounmpo. He could be suspended by the league, or the Bucks might decide to rest him. Follow Jeff Zillgitt on Twitter @JeffZillgitt .