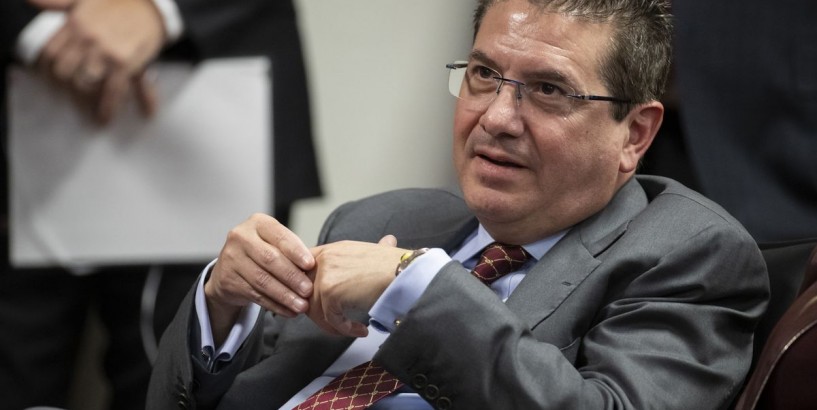 In the latest Post story, 25 more women said they were sexually harassed during their time with the team.

The NFL said it “strongly condemns” the behavior alleged in the Post story, adding an independent investigation is underway into the matter. Washington hired noted District-based attorney Beth Wilkinson and her law firm last month to investigate the initial claims of sexual harassment, and a team spokesman said the league considers Wilkinson to be independent.

The NFL , in its statement, said the league was monitoring Wilkinson’s investigation and intends to step in if Washington doesn’t cooperate with the probe. Upon conclusion of the investigation, the league vowed to take “any appropriate action” based on the findings.

Tiffany Bacon Scourby, a former cheerleader for the team, told the paper that in 2004, Snyder suggested she “go upstairs” with Anthony Roberts, his longtime friend and the “official ophthalmologist” of the team, during a charity boxing event. Scourby said Snyder said she and Roberts should “get to know each other better” in the hotel room.

Snyder “unequivocally” denies that the Scourby conversation ever happened, adding it was not reported to anyone at the team. But in the article, Scourby, 42, said at the time, she reported the incident to Donald Wells, the team’s cheerleader director.

He told the newspaper he remembered the conversation.

“I remember her saying, ‘Daniel Snyder offered me the suite with one of his friends,’” Wells told the Post. “She was more or less propositioned.”

“There’s a power dynamic, and Dan Snyder looked down on me,” Scourby said.

The paper also reported the existence of a video featuring outtakes from the filming of a 2008 cheerleader swimsuit shoot that included shots of inadvertently exposed breasts. The cheerleaders did not know the video was created, and the Post reported that Larry Michael, the team’s former play-by-play man and senior vice president, had initially requested his staff to create a video featuring “the good bits.”

Brad Baker, who worked under Michael, said that Michael told his staff the video was for Snyder .

“Larry said something to the effect of, ‘We have a special project that we need to get done for the owner today: He needs us to get the good bits of the behind-the-scenes video from the cheerleader shoot onto a DVD for him,’” Baker said.

A similar video was created in 2010, this time using footage from the cheerleaders’ trip to the Dominican Republic. The paper reported Michael ordered the footage be burned to a DVD titled “For Executive Meeting.”

Michael denied the allegations to the Post. Snyder said he had no prior knowledge of the videos.

Snyder , meanwhile, faced calls to step down in light of Wednesday’s news. ESPN commentator Keith Olbermann demanded “Dan Snyder must go. Today, NFL .” Eric Columbus, a former lawyer for the Department of Homeland Security, wrote on Twitter that the league should force Snyder to sell.

Christopher Schmidt, who co-chairs the sports litigation practice at law firm Bryan Cave Leighton Paisner, said while the NFL has the power to force Snyder to sell, it would likely be difficult to do so — even with the new details.

Schmidt said Section 8.13 of the NFL ’s bylaws, which states an owner can be forced to sell if they have been “guilty of conduct detrimental to the welfare of the league or professional football,” has never been used. Three years ago, former Carolina Panthers owner Jerry Richardson voluntarily opted to sell his team after Sports Illustrated reported he settled four cases of inappropriate workplace behavior.

“In order for the NFL to invoke this clause, they would likely need to find some evidence that Snyder was directly complicit in creating a culture that fostered sexual harassment,” Schmidt said. “Even there, I think they’d be pretty reticent to go down the path of forcing a sale.”

Snyder has already resisted overtures to sell the team in the past. Earlier this month, The Wall Street Journal reported the team’s three minority owners are actively trying to have Snyder sell his majority stake. After he refused to do so, the three men hired an investment banking firm to help sell off their own shares.

Snyder’s battle with his ownership group is just one of the many problems that have mounted for the 55-year-old in his 21st year as owner.

In July, the team abandoned the moniker “Redskins” and changed to the temporary “Washington Football Team.” Snyder , who famously said he would never change the change, did so after pressure from activists and corporate sponsors in light of national reckoning with race following George Floyd’s death.

In an attempt to rebuild the team’s business side, Snyder has also brought in a series of new executives. He hired Julie Donaldson to run the team’s media department to replace Michael and then, weeks later, named Jason Wright as team president, making him the first Black person to hold the position in the NFL . Wright, a former running back turned business consultant, said he joined the team in part because of what he heard from Snyder .

“I was especially excited because of what Dan and Tonya Snyder are doing to reset the culture of the organization,” Wright told The Washington Times last week.

But on Wednesday, Snyder again issued another lengthy statement about the team’s workplace.

“I have admittedly been too hands-off as an owner and allowed others to have day-to-day control to the detriment of our organization,” he said. Sign up for Daily Newsletters