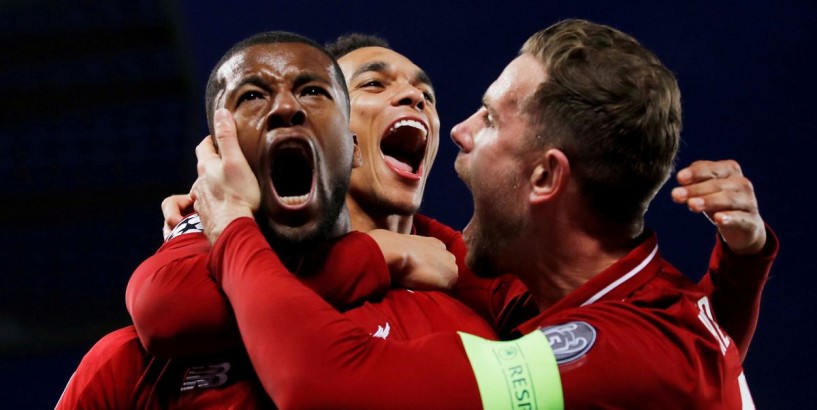 Liverpool 4-0 Barcelona: Champions League comeback told by the players who made it happen

It was the greatest game in Anfield history, probably the greatest ever single Liverpool performance. And it all started on a miserable Catalan evening, where Barcelona triumphed 3-0, as Lionel Messi confirmed his status as footballing royalty.

Yet even in the Nou Camp dressing room immediately afterwards, things were stirring amongst a Liverpool side licking their wounds over what they perceived as an injustice, as skipper Jordan Henderson explained:

“The lads were saying, ‘We were better than them…that wasn’t a 3-0, I think we’ve still got a chance.’

“Messi was unbelievable, yes, but we weren’t talking about him. It was more ‘how’s that just happened?’ I remember in the ice bath, Gini (Wijnaldum) saying, ‘We can come back. We will come back. Then I remember Sadio going, ‘Yeah [we can do it].’”

It was a feeling reflected by van Dijk, who knew their belief would be the key to a miraculous comeback: “3-0 looks like we had a proper shocker, but we were all sitting there saying 'How?' We knew it was wrong.

“So the whole build-up to the return and the moment that we arrived at the stadium, I felt that this could be a special night.”

In fact, the magic started happening even before that miraculous evening on May 7, when Anfield witnessed its most famous European night of all as mighty Barcelona were vanquished 4-0.

As Henderson explained, manager Jurgen Klopp produced the initial inspiration. “He said for any other team, Barca 3-0 down, no chance.

“But because it’s you, knowing what you are capable of, there’s a chance - a chance of doing something special. After that I just felt 'wow'. Everybody felt like that. Everybody after that was just raring to go.”

“He told us that we could achieve the impossible and create something we could tell our grandkids about in the future."

Klopp is less demonstrative about his speech. “I really believed that, but of course it is easy for me to say those words, I am just the guy yelling from the touchline. But because of those boys we did the impossible.”

What unfolded after that meeting, has gone down in history. Here is the timeline of how the historic comeback happened.

18.37 : Barcelona arrive at Anfield. From that moment on May 7 - exactly a year ago - it seemed their fate was sealed. The tension on experienced faces such as Rakitic, Pique, even Suarez spoke volumes.

18.41: Liverpool’s coach arrived, Andy Robertson the first player to disembark, cracking a joke with a huge grin, and he explained the mood in the dressing room.

“We were right up for it. It was the loudest changing room I have been in before the game.”

That noise permeated into the Barcelona dressing. Messi spoke afterwards of his fear that Barca couldn’t cope with Liverpool’s intensity for a second game in seven days.

19.19: Liverpool warm up, and already You’ll Never Walk Alone rings around the stadium. “It never felt flat, not for a second,” Henderson said. “I was thinking: Anfield, the crowd, an early goal….”

But still, as Matip explained: “Of course, if you have players missing with the quality of Bobby and Mo…it doesn’t make the day better if you hear ‘he is missing and he is missing’.”

20.00: Kick Off. From the start, Liverpool press forward, the noise is defeating and Klopp admitted: “I couldn’t even hear my assistant on the bench.

Divock Origi remembered it as something hair-raising.

"It was electric. It was something special, something that really warmed us as players, that put us in a different state. The noise, it was heart-warming. It took us to a different level.

20.05: Andy Robertson disembowels Messi, then shacks him around the head for moaning about it. The crowd go into meltdown.

“We all had the attitude that day that nothing was standing in our way to get to that final and we created that atmosphere around the stadium,” the defender recalled.

“You could see the focus and the determination in all of us and maybe I went over the line. I do look back on that moment with Messi as one regret. I don’t like seeing it, but if it means having to get at their best player to win the game...”

20.07: Mane puts Henderson in - “I should have scored!” - but Divock Origi was perfectly placed to convert the rebound.

“That started it, but you can see in my body language was to keep going, keep scoring.”

“People forget the saves he made, but they were crucial. We had to keep a clean sheet,” van Dijk explained. “We could achieve nothing without that clean sheet."

There were still problems, though. At the interval, Henderson could barely walk and he remembered: “There was no way I was coming off. I was hurt in the first half, but thought if I could keep going, get through until half time, I’d be okay.

"I hurt a tendon in my knee in a tackle but I had injections and painkillers and jumped on the spinning bike for 10 minutes to stop my knee seizing up.”

Robertson was not so lucky after being clattered by Suarez. “I was devastated, but I still remember I said to the masseur in the treatment room 'we're going to do this.”

James Milner though, recalls the tactical change at half time. “Robbo says that’s his greatest contribution as part of a Liverpool team, going off at half-time in that game and bringing Gini on!”

21.05: The restart and already there was a feeling of history being made. As Matip recalled: “We were getting more and more speed with the game.

“On the pitch, it was really, really loud…you couldn’t hear. But that’s not the worst problem!"

21.13 and 21.15: Gini Wijnaldum scores, then within a few seconds of play resuming, finds the net again. There was more than a hint of venom in his play, and a sense of desire too.

“I was really emotional, really angry at the manager that he put me on the bench.

“So I had to do something and it was a really crazy feeling in truth. It was even more special after the game. During the game you are full of adrenaline. You don't realise what you have done.”

What he had done, had given Liverpool the perfect platform for perhaps one of the most famous moments in Anfield history. They knew by then it would happen, too.

“From that moment, the momentum was ours,” Milner said.

21.38: Corner taken quickly. The goal needs no description, but Origi perhaps needs reminding, as he has different versions. First, he admitted he only saw “Trent moving in the corner of my eye.” Later, he revised that opinion.

“I did see. I saw a ball on the pitch and gave it back to the ballboy so automatically I was looking at who was taking the corner. I think we made brief eye contact and I could see that he was going to do something instinctively.

“I looked up before I could kick the ball and I saw that Pique and Ter Stegen were more in the middle and the left side was open.

"But it was still a hard shot. I had practised that in training, but of course, nine in 10 [attempts] the chances are you can put it over or even in the middle of the goal.

“It was a very difficult finish because my back was turned to the ball."

For Alexander-Arnold, it was a perfect storm.

“We hadn’t practiced it, it was just instinctive. It was in that split-second, I noticed the opportunity and I used it. I looked across, saw Divock and no-one was looking.

“It was one of those when you don’t really believe what's actually happened…you feel like it’s too easy! A goal like that shouldn’t happen in the Champions League semis.”

At least they saw the ball go in. Klopp didn’t. His greatest moment and he missed it.

“I saw Trent go over to take the corner and Shaqiri follow him, but then I turned to my assistant because we were about to make a substitution.

“I have goosebumps every time I think about it. I just heard the noise. Anfield was going absolutely crazy, I could barely hear my assistant and he was yelling ‘so do we still make the substitution?’

“I’ll never forget that, it will always be with me. Can you imagine 18 years as a manager, millions of hours watching this game, and I missed the cheekiest thing that has ever happened on a football pitch!”

From there, it was inevitable. Barcelona were empty. Haunted.

21.53: Milner takes the ball to the corner, and the final whistle goes. He jumps on Wijnaldum, Henderson slumps to the ground. Klopp charges onto the pitch. No one quite believes what happened.

“The best moment was waking up the next morning and realising: 'It’s still true, it still happened', Klopp mused much later.

“We did the impossible. The beautiful thing about football, is you can’t do anything alone. Anything. believe me. You wake up in the morning and the magic was all real. It really happened. Together."

Matip had to leave for the drug testing room, but insisted on joining the celebrations a little. “I didn’t care about anything - singing with the fans was heaven.

“When I came into the small room, there was a pretty depressed little guy: Lionel Messi. Everyone is celebrating – and I’m sat in a cubicle with Messi.”

Read More Mirror Football's Top Stories So was it the greatest night in Anfield history? Most people agree. Van Dijk describes it as “nuts”. For Henderson, it was his greatest night at Anfield. Klopp still talks about his goosebumps. But perhaps Milner sums it up best of all.

“How great a team Barcelona are made it even more special. It wasn’t any team we managed to turn over like that, it was an unbelievable team with experienced, incredible players.”