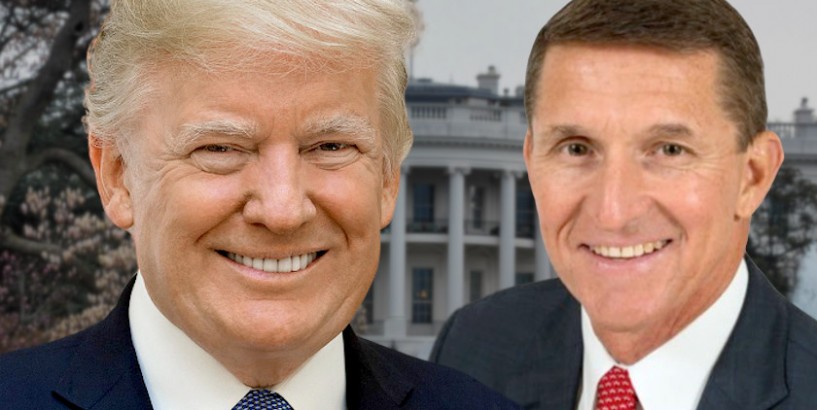 Commentary: If Michael Flynn Can't Withdraw His Guilty Plea, Then President Trump Should Pardon Him

New documents appear to show that the FBI was intent on setting up former National Security Advisor Michael Flynn in a perjury trap to help keep the Justice Department’s then-ongoing investigation into President Donald Trump going in Jan. 2017 on false allegations he was a bought and paid for Russian agent that themselves were bought and paid for by the Democratic National Committee and the Hillary Clinton campaign.

Russia hacked the DNC and John Podesta and had their emails published on Wikileaks during the 2016 election campaign, and it was viewed by the Obama administration as an act of war, calling it a digital Pearl Harbor. But the first response was not to sanction Russia, which would not come until Dec. 2016 after the election, it was to spy on the Trump campaign with Foreign Intelligence Surveillance Act (FISA) warrants beginning in Oct. 2016, and even before that.

First, it was by targeting George Papadopoulos via foreign agency efforts beginning in mid-2016, and then the FISA warrant applications on Carter Page beginning in Oct. 2016, fueled by the DNC-Steele dossier falsely accusing President Donald Trump, Page and Paul Manafort of being Russian agents. Those were renewed after the election and then finally the fateful strike on Michael Flynn in Jan. 2017, spying on his Dec. 22, 2016 conversation he had with Russian ambassador Sergei Kislyak, leaking it to the Washington Post on Jan. 12, 2017, sending the FBI to ask about it on Jan. 24, 2017.

Now, we know based on the newly released documents that it was all a set up. One handwritten internal FBI note stated, “We have a case on Flynn & Russians… What is our goal? Truth/Admission or to get him to lie, so we can prosecute him or get him fired? … If we get him to admit to breaking the Logan Act give facts to DOJ + have them decide… If we’re seen as playing games, WH will be furious. Protect our institution by not playing games.”

Instead, play games is exactly what the FBI did. It went in and questioned Flynn, and within days Flynn had lost his job as National Security Advisor. The Washington Examiner’s Byron York reported in Feb. 2018 that the FBI did not think so, reporting, “[Former FBI Director James] Comey told lawmakers that the FBI agents who interviewed Flynn did not believe that Flynn had lied to them, or that any inaccuracies in his answers were intentional.”

Nobody at the time thought that Flynn had done anything wrong by having the conversation with Kislyak — including the FBI which investigated the conversation concluding no crime had been committed, the Washington Post reported a day prior to his questioning on Jan. 23, 2017 — even if the conversation did mention the Obama administration’s midnight implementation of sanctions against Russia. That was no crime.

Meaning, as of Jan. 24, 2017, there was no crime for the FBI to have been investigating Flynn for having committed, by the FBI’s own account, nor one to have questioned Flynn about. Yet, the interview took place all the same.

It was Deputy Attorney General Sally Yates who was obsessed with the idea that Flynn had committed a violation of the Logan Act by talking with Kislyak. As the Examiner’s York reported on Dec. 3, 2017 , “Former Deputy Attorney General Sally Yates has told Congress that the Logan Act was the first reason she intervened in the Flynn case — the reason FBI agents were sent to the White House to interview Flynn in the Trump administration’s early days. It was that interview, held on Jan. 24, 2017, that ultimately led to Flynn’s guilty plea.”

York added, “Starting in the summer of 2016 and intensifying in the transition period, the Logan Act, while mostly unknown to the general public, became a hot topic of conversation among some Democrats. A number of lawmakers, former officials, and commentators called on the Obama administration to investigate the Trump team for a possible Logan Act violations — and to do it while Democrats still controlled the executive branch.”

Meaning, the Logan Act investigation appears to have begun months prior to Flynn’s conversation with Kislyak. Flynn appears in the DNC and Clinton paid for dossier by former British spy Christopher Steele because of his speaking engagement, which was really an interview led by a Russian reporter, Sophie Shevardnadze, in a public forum, at the Russia Today 10-year anniversary in Moscow in Dec. 2015 . Steele wrote in Aug. 2016: “Kremlin engaging with several high profile U.S. players, including… former DIA Director Michael Flynn… and funding their recent visits to Moscow.”

But it was not that controversial at the time of his visit, since Flynn apparently briefed the Defense Department both before and after the event and had his security clearance reupped in April 2016 after the fact.

There was the topic that Flynn spoke of at the Russia Today event, which was the potential for U.S.-Russian cooperation to defeat Islamic State, focusing on “mutual interests” and restoring “strategic stability” to the Middle East. Flynn was there to sell the idea that the U.S. and Russia had a common enemy in Islamic State and more broadly radical Islam, a proposal candidate Trump would adopt in 2016.

Flynn stated, “This back and forth, and I do appreciate it… and I respect it, because we have to have this debate, we absolutely have to have this debate, and we have to have it now. And we can’t—the United States—and I’m speaking as a really a private citizen—the United States can’t sit there and go, Russia, you’re bad, and Russia can’t sit there and say, the U.S., you’re bad. What we have to do, like we have done in the past, and I could go into a couple of historical examples where Europe would not be the Europe that it is today, thriving, had it not been for Russia and the United States working together 75 years ago, and in other places [is] where we have worked together. So, this idea of us not being able to work together is a misnomer, and I think we have to step back and we have to say, okay, what are the common interests, and then, what are the common goals that we want to achieve, and those goals I believe the number one goal is to… eliminate the cancerous idea that exists inside of the Islamic religion, we must do that.”

Flynn called on Arab leaders to work with the U.S. and Russia toward that end, and added, “the second common goal is to then, to keep some level of stability in the Middle East that creates a new set of economic conditions, to deal with these… frankly, theses 15-to-35-year-old young men that exist…”

Flynn also called for patching up U.S.-Russian relations, another position Trump would adopt on the campaign trail: “Stop being like two bullies in a playground. Quit acting immature… with each other and know that I have… a disagreement with you, you have a disagreement with me. You know, this is a funny marriage between Russia and the United States, but it’s a marriage… whether we like it or not. And, that marriage is very, very rocky right now, and what we don’t need is we don’t need that marriage to break up. We’ve had our break ups in the past, but we need to… look at this, I mean, I’m deadly serious about this, because I know this enemy… and I think there’s some in this country that know this enemy from having dealt with it in Chechnya and Dagestan and other places. This is a very, very deadly enemy.”lynn expressed hope that his idea for cooperation would be accepted in both Washington, D.C. and Moscow to defeat their common enemy and to avoid a larger conflict: “My wish and my hope is that we figure out a way strategically to work together, I think that that’s the way ahead. Whether or not we work together 20 years from now, I don’t know, but I know if we don’t work together right now, the potential for going to a larger conflict against each other or the potential for this enemy to do far more damage than they already have is very, very real.”

Maybe that was Flynn’s true “crime.” He wanted things to change in the Middle East and perhaps to avert a wider, unnecessary conflict between the U.S. and Russia, and supported then-candidate Trump on the campaign trail with that message in 2016, helping Trump win over swing voters in battleground states . And so the Obama administration, intelligence agencies and the Justice Department went to great lengths to decapitate the Trump administration in its very first days. Out of mistrust, fear or revenge, who knows?

Some answers may come from a Jan. 20, 2017 email that former National Security Advisor Susan Rice sent to herself on the day Trump was inaugurated about a Jan. 5, 2017 meeting in the Oval Office, in which Rice wrote, “On January 5, following a briefing by IC leadership on Russian hacking during the 2016 Presidential election, President Obama had a brief follow-on conversation with FBI Director Jim Comey and Deputy Attorney General Sally Yates in the Oval Office. Vice President Biden and I were also present.”

This was the Russian interference into the 2016 election briefing given a day before then-Director of National Intelligence James Clapper issued the joint intelligence assessment on the same, but the version that was given to former President Barack Obama and then-President-Elect Trump on Jan. 5, 2017 also reportedly included some of the allegations leveled by former British spy Christopher Steele in his infamous dossier , paid for by the Hillary Clinton campaign and the Democratic National Committee, that Trump was a Russian agent. It looks like the goal was to trap then-President-Elect Trump with former FBI Director James Comey conducting the interview, and to keep the predicate for continuing the investigation into the Trump administration.

Afterward, Comey would lie about the extent of the investigation of President Trump, who would fire him in May 2017, leading to the appointment of Special Counsel Robert Mueller. The rest, as they say, is history, but it is also prologue.

In light of Special Counsel Robert Mueller’s finding of no conspiracy or coordination between the 2016 Trump campaign and Russia after a nearly three-year investigation that was originally ordered by intelligence agencies and the Justice Department during the Obama administration, it is time to revisit all of these episodes in great detail.

Given the weight of evidence that both Flynn and Trump were set up with bogus allegations they were Russian agents, and the fact that Trump has since been cleared of such a conspiracy by Mueller, if the judge overseeing Flynn’s case won’t allow him to withdraw his guilty plea, then President Trump should do what is necessary and pardon him once and for all, and probably give him back his job.

Robert Romano is the Vice President of Public Policy at Americans for Limited Government.

Reprinted with permission from DailyTorch.com