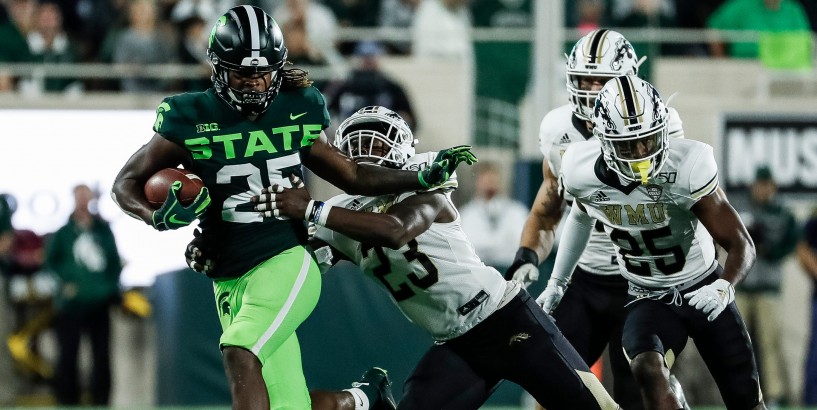 Will the real Michigan State football offense please stand up?

EAST LANSING — Free Press sports writer Chris Solari answers three questions, after the Michigan State Spartans' 51-17 win over Western Michigan on Saturday night at Spartan Stadium. The truth probably lies somewhere in between. The Spartans have much more talent than they showed in generating 303 total yards and 108 on the ground against Tulsa in Week 1. They nearly doubled that with 582 total yards, including 251 rushing, and still left a bunch of points on the field against the Broncos. MSU could have put up more than 60 if not for three stalled drives that ended in field goals, two of them fizzling in the red zone. The Spartans scored their most TDs since the Holiday Bowl to cap 2017. The confidence factor is one thing, though, that cannot be discounted. The first two plays of the game was a 33-yard pass from Brian Lewerke to Darrell Stewart Jr., then a 29-yard run from Elijah Collins, and that allowed the offense to gain needed confidence. Another spectacular one-game subset after not being on display against Tulsa. Both from the redshirt freshman running back and his blockers. Collins looked the part, from his first big run to the edge to jump cuts on shorter gains, where he hesitated and changed direction as the hole developed. He looked like a running back playing running back, unlike converted tailbacks Connor Heyward and La’Darius Jefferson, who have both shown playmaking ability but struggle with vision and instincts. The 192 rushing yards by Collins are the most since LJ Scott ran for 194 at Minnesota in 2017, but offensive coordinator Brad Salem promised it remains a backfield-by-committee. Jefferson scored two short TDs, while Heyward continued to look better in the passing game than carrying the ball, and lost a fumble. True freshman Anthony Williams Jr. rushed for 35 yards on six attempts late. If Collins can continue to show that type of burst to the edge, he could maintain the bulk of the carries by the Big Ten opener at Northwestern on Sept. 21. As for the offensive line, which Dantonio blasted earlier this week, the Spartans went to a stable five-man unit in scoring three TDs on their first three drives – Kevin Jarvis at left tackle, Luke Campbell at left guard, Matt Allen at center, Matt Carrick at right guard and Jordan Reid at right tackle. Reid shined after struggling against Tulsa, with Collins running behind him for most of his big gains – the 29-yarder early, as well as a 58-yarder in the third quarter. Can that performance persist? Maybe. The Spartans will go far if that unit plays like it did against WMU, and the offense will languish if it looks like it did against Tulsa. But the biggest task remains finding five guys and working to build consistency and cohesion among them. Saturday was a step toward that. Stewart left no doubt he can be that guy to fill Felton Davis’ shoes as Lewerke’s top target. The two fifth-year seniors connected 10 times to help Stewart eclipse 100 yards receiving for the first time in his career, his 185 yards the most by an MSU receiver since R.J. Shelton had 190 yards against Northwestern in 2016. Stewart’s route running was crisp Saturday, and he made catches over the middle and to the outside. His 42-yard TD catch showed his ability to run through tackles at the end of plays. With Jalen Nailor out for the foreseeable future , Stewart showed off the speed he struggled with after injuring his ankle early last season. Contact Chris Solari at csolari@freepress.com . Follow him on Twitter @chrissolari . Read more on the Michigan State Spartans and sign up for our Spartans newsletter .