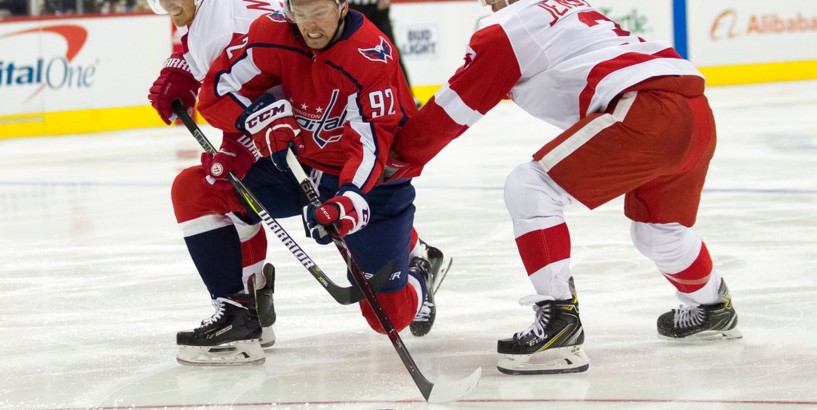 Why Detroit Red Wings will move on quickly from latest loss

WASHINGTON — The score already foretold the ending, but the Detroit Red Wings wanted to make sure they moved onto their next game with dignity. A chance to re-energize is welcome, too. The Wings make what will be a rare home appearance for the rest of this month when they host the Ottawa Senators Friday, coming off a stretch of playing seven games in 11 days. They went 3-3-1 against some of the best teams in the NHL, ending with a lesson-learned loss to the Washington Capitals Tuesday at Capital One Arena. It was 6-2 at the buzzer, but 5-0 when the Wings went into the second period determined to do better than the October routs in Boston and Montreal. “We talked about that,” coach Jeff Blashill said. “Last time we were in this spot in Boston we started cheating like crazy and lost our game. And then we did the same thing in Montreal. We felt like going into the third period it was real important we play the right way and for the most part, we did a decent job. “We have some stuff we have to get corrected, for sure, but we have to put it behind us. At the end of the day, if you play the right way in the third, then all of a sudden it’s just one loss. You move on and you find a way to get better.” The Wings found a way to get better after an 1-7-2 start by becoming closer as a team. Fittingly, one of the themes Tuesday night — the Wings’ second game in two days, third in four days — was that Jonathan Bernier deserved better than to be replaced midway by Jimmy Howard after allowing five goals on 15 shots. One was a tip. Another was a shot that was going wide until redirected off Niklas Kronwall. Three were from Alex Ovechkin, another from T. J. Oshie, with each player scoring on a power play. “It was tough seeing Bernie get pulled because of our play,” Dylan Larkin said. “He has been so good for us all year.” Relieving Bernier was not a reflection on him. “I don’t know if I’ve been in a 5-0 game where the goalie had as little chance as he had,” Blashill said. “If you think about it, the only two he really has a chance on is Ovechkin coming down on a 2-on-1, one of the best goal scorers of all time, and Oshie wide-open in the slot, one of the premier goal scorers of today. Come on.” If the Wings are to rise in the standings, one area that needs resuscitation is the power play. Since going 13-for-54 (24.1 percent, eighth in the NHL) through the first 18 games, it has gone 2-for-31 (6.5 percent) the last 14 games, worst in the NHL in that stretch. “We are not getting pucks around the net as much as we were,” Larkin said. “We’re trying to set up the pretty play. There’s a lot of one-and-dones and we’re aware of that, we’re trying to minimize that. We switched up the units a little bit. We need to create chaos around the net more and bang in a rebound. That’s all it will take.” Blashill said the Wings have to “shoot the puck to break people down, if you don’t shoot the puck, you don’t break people down, but if you don’t get it back, then shooting the puck ends up a waste of time. So guys that are on the power play have to take more pride in it, they have to be better at it, or different guys are going to be on it.” The Wings outshot the Capitals 37-25, 26-15 after the first period. They lost, but they found a way to salvage their pride during the second intermission. “We talked about the Boston game and then going onto Montreal,” Larkin said. “We needed to make sure we were playing the right way and a detailed game. We did that.” Contact Helene St. James: hstjames@freepress.com. Follow her on Twitter @helenestjames. Check out our Red Wings Xtra app on Apple and Android !