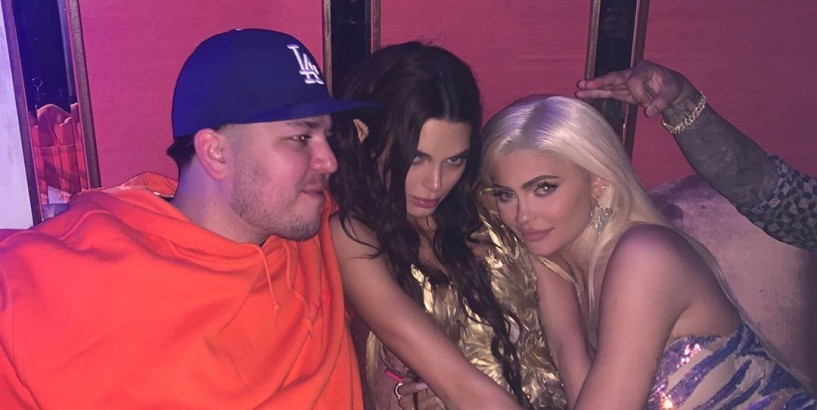 Rob Kardashian is getting his groove back! After living the life of a recluse in the past few years, the 32-year-old made a rare appearance at his sister Kendall Jenner's star-studded 24th birthday bash. The sole male member of the Kardashian family, who did not make a public appearance in 17 months, was living it up at his sister's birthday party at Blind Dragon, where he was spotted with his arm around Kylie's BFF Stassie Karanikolaou.

Kylie posted a picture of herself with brother rob and sister Kendall on her Instagram account, where Rob could be clearly seen having a thinner frame than his previous pictures. The Kylie Cosmetics founder captioned her post, "5 am birthday adventures with my two fav people"

Rob's return to the 'gram clearly made a lot of his fans happy, for they couldn't help but gush over the single dad on the comments section of Kylie's post. Fans wrote, "Damn rob looks good... Omg ROB!!! ... Rob looks good ... Is Rob getting skinny again... Rob looking like a snack... omg rob looks so good... Roberto! We love!... @kyliejenner happy to see Rob."

It seems like 32-year-old American media personality, who has shied away from being seen ever since the fallout of his relationship with ex-girlfriend Blac Chyna, is ready to come out in public. On Halloween, Rob made another surprise appearance on his mother, Kris Jenner's social media account.

The momager posted a picture of her son dressed like a troll, or more specifically, Papa Troll, with his daughter Dream, who he shared with Chyna. In the caption, the reality TV star wrote, "Halloween 2019 @robkardashianofficial ❤️ Rob and Dream dressed as Papa Troll and Poppy Troll " adding, " #family #love #Halloween #memories"

The social media account mostly contains promotional graphic and video posts for Rob's Halfway Dead clothing line but has no pictures of the star himself. Rob's account was suspended by Instagram in 2017 because of the explicit photos and details he shared of Chyna on the platform after their split.