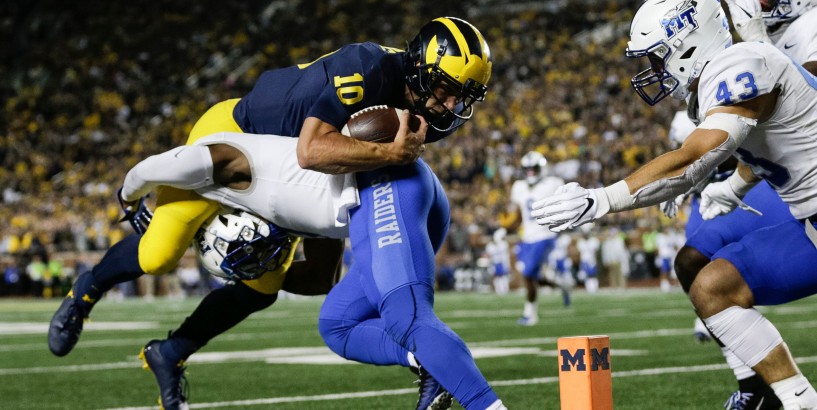 Michigan football: What we learned, what to watch for against Army

Looking back at what happened in Michigan's 40-21 win over Middle Tennessee State , and a look ahead to Saturday’s game vs. Army: Matchup: No. 7 Michigan (1-0) vs. Army (1-0). Kickoff: Noon, Saturday, Michigan Stadium. TV/radio: Fox; WWJ-AM (950), WTKA-AM (1050). Line: U-M by 22.5. Offense still work in progress: Overall, U-M's new offense looked promising . The no-huddle spread attacked all areas of the field and let quarterback Shea Patterson throw it everywhere. Michigan's receivers made plays, Zach Charbonnet and Christian Turner looked good running the ball and Patterson mostly played well while making sound decisions. Still, there's improvement to be made – the Wolverines can improve their ball security and pass protection, there were plays Patterson might've liked to have back and the quarterback situation – especially the two-quarterback formations – seemed weird . Secondary could be fine: There were plenty of question marks in the defensive backfield, although Michigan started providing answers Saturday night. Ambry Thomas, back from colitis, didn't show much rust and played solid coverage all night . Vincent Gray was a physical presence at corner, coming up to make a few stops near the line of scrimmage. Brad Hawkins played well at safety, and Lavert Hill and Josh Metellus were their usual reliable selves. Dealing with some injuries: Michigan was missing several key contributors Saturday night. Receiver Donovan Peoples-Jones, who led the team in receptions and receiving touchdowns last fall, had a walking boot on his right foot. Nose tackle Donovan Jeter was not in uniform. Left tackle Jon Runyan Jr., a first-team All-Big Ten performer in 2018, was in uniform but did not play. Defensive tackle Michael Dwumfour played briefly before departing with injury. U-M might have enough to get by Army without them. But it's surely hoping they'll be back for a trip to Wisconsin on Sept. 21. Army will carry a 10-game win streak into Michigan Stadium this Saturday – the second-longest streak in college football, behind Clemson. Led by coach Jeff Monken, the Black Knights' triple-option attack is unlike anything else Michigan will see all season. Army, which opened the season with a 14-7 win over Rice on Friday, also returns several key contributors from their 11-win team last season, including quarterback Kelvin Hopkins Jr., who ran and passed for over 1,000 yards in 2018. Army's disciplined offense helps close the talent gaps it faces. The Black Knights have the ability to rip off long, clock-draining drives that decrease the number of possessions for their opponents. That blueprint very nearly pulled off the upset against Oklahoma last fall – the Sooners, who reached the College Football Playoff, needed overtime to beat Army. Triple-option attack: Army's offense is hard to defend because of its consistency and discipline. The Black Knights know what they're capable of and can score points and chew clock by adding up smaller chunks of yardage. Army's offensive line is smaller than what Michigan would encounter in the Big Ten, but the Black Knights compensate for any size disadvantage with cut blocking, a technique that can be especially difficult for defensive linemen. Staying true to fundamentals: U-M's defense will have to play fundamentally-sound football, something defensive coordinator Don Brown has no doubt been preaching for the past year (Brown said in early August that he started preparing for Army "every day" in the spring). The Wolverines will have to stick with their assignments and hope to get Army into long second and third downs. U-M's offensive efficiency: In a game where possessions could be limited by Army's clock-chewing offense, the Wolverines will need to take care with each offensive possession. A fumble on the opening play of the season led to a MTSU touchdown. U-M's two-quarterback formation completely tanked its third possession, which had reached enemy territory. The Wolverines stalled out several other times and failed to convert a fourth-and-goal from the 1-yard line. Ultimately, none of that hurt Michigan against the Blue Raiders. It could against Army. Contact Orion Sang at osang@freepress.com . Follow him on Twitter @orion_sang . Read more on the Michigan Wolverines and sign up for our Wolverines newsletter .