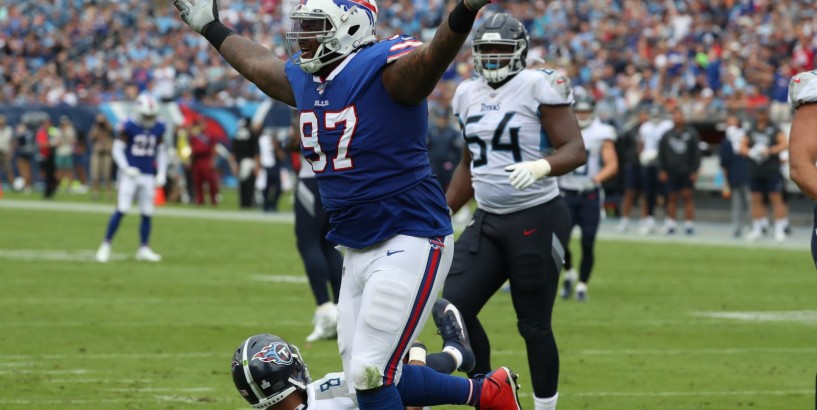 Bills’ defense continues to raise the bar in win over Titans

NASHVILLE – The Buffalo Bills’ defense gave up a lone touchdown Sunday against the Tennessee Titans.

Not exactly, according to safety Micah Hyde.

“We didn’t play our best football,” Hyde said following his team’s 14-7 victory at Nissan Stadium. “We gave up seven points and I felt like we played a bad game. We gave up some big plays late in the game when we should have gotten off the field.”

With each passing week, it’s becoming more apparent that the standard for the Bills’ defense continues to reach new heights.

“We're built for this,” defensive tackle Jordan Phillips said. “Week in, week out, you guys see the same thing every week. It's just time for the world to see it. We're finally starting to get the respect we deserve, but we're going to keep going and try to do what we do.”

Phillips played a big part in Sunday’s defensive effort. He became the first Bills defender to have three first-half sacks since Mario Williams in 2013. It was also the first time in his career – at any level of football – that Phillips had a three-sack game.

“It was fun,” Phillips said. “The secondary was great. They made him hold the ball, and luckily I was the one to get the sacks. But everybody was feasting. Everybody was having a good day. (The plays) came to me.”

Phillips now has a team-leading four sacks in five games.

“He's a dog,” Hyde said. “That's one guy right there who continues to work. Everybody has faith in what he's able to do for this football team. ... He's giving us effort, and that's why we love the big guy.”

Overall, the Bills sacked Titans quarterback Marcus Mariota five times and hit him eight times. Mariota had been sacked 17 times in the first three games but was not sacked last week in a win against the Atlanta Falcons.

“I think it's a mixture of great coverage and then great pressure up front,” said linebacker Lorenzo Alexander, who also had a sack. “I think our defensive backs did a great job of disguising some things, making Mariota hold onto it and that gave time for Jordan to get to the ball. He had a great game today ... but he's been playing well all year. He's continued to get better.”

The Bills benefited from some questionable play calls by Titans coach Mike Vrabel and a meltdown by kicker Cairo Santos, but that doesn’t take away from what was another standout performance by a defense that has established itself as one of the league’s best through five weeks.

“We just went out and played,” Hyde said. “We’re not here to make statements.”

Maybe not, but they did anyway.

Buffalo Bills fans enjoy tailgating in Nashville 2. Sunday’s win came with a price. The Bills lost four starters to injury. Starting center Mitch Morse was the first of those to go out, suffering a right ankle injury in the second quarter. After being examined on the sideline, Morse was eventually carted to the locker room. In response, the Bills shifted right guard Jon Feliciano to center and inserted Spencer Long at right guard.

The Bills then lost rookie right tackle Cody Ford to a head injury in the third quarter. Ford pulled full-time duty Sunday at right tackle before getting hurt because veteran Ty Nsekhe – who had been rotating with Ford through the first four weeks – missed the game because of an ankle injury.

The defense was hit hard, too. Linebacker Matt Milano left the game in the second half with a hamstring injury and could not finish the game. Defensive end Trent Murphy also suffered a head injury and couldn’t finish.

“We had some guys go down,” coach Sean McDermott said. “A lot of guys were prepared, stepped in and did a good job.”

3. Some would say it came about 20 years too late, but the Titans were finally called for an illegal forward pass. Mariota was flagged for being over the line of scrimmage in the fourth quarter when he threw a touchdown pass to rookie receiver A.J. Brown. The play, which would have given the Titans the lead, immediately brought to mind the “Music City Miracle.” That, of course, had a much different outcome for the Bills.

"I just tried to make a play, and lost track of where I was," Mariota told reporters. "I thought I was behind the line of scrimmage and gave A.J. (Brown) a chance to score a touchdown."

The penalty against Mariota was a huge turning point in the game. That’s because on the next play …

4. Darryl Johnson recorded a blocked field goal. The rookie defensive end got just enough of Cairo Santos’ 33-yard attempt in the fourth quarter to force the ball to land short.

“I had been telling 'Zo' all day, 'We going to get one.' We had been getting penetration all game,” Johnson said. “That's what we did – go get it, made a play.”

Johnson would later record his first career sack. He kept his jersey after the game to commemorate it.

“It wasn't the perfect, ‘Make a move and the highlight,' but it was my first one and that means a lot,” he said.

“It was a very painful, extremely disappointing day,” Santos said. “There was nothing that felt right. … I feel sorry for my teammates, my coaches. They deserve to win and I have just got to do a better job.”

“Unbelievable,” the coach said. “I don’t think I have ever seen it like that at an away game. Fans, great job. … I really appreciate that. The players felt it. The staff felt it.”

Defensive end Jerry Hughes was pumping up the crowd early in the game. He had an idea Saturday about what might be coming.

“We went out to eat at a barbecue restaurant and to hear, 'Hey-eh-eh-eh, I mean our home song, in Nashville, Tennessee, is fun to watch,” Hughes said, referring to the familiar refrain of the "Shout" song. “The crowd was electric. Even in their home stadium, we got a false-start penalty. Those are the things that the 'Mafia' brings. We talk about a 12th man, and that's them for us. We love them.”

Buffalo Bills fans enjoy tailgating in Nashville 6. The Bills elected to play it safe with Devin Singletary. The rookie running back went through a lengthy pregame workout, but was ultimately held out for a third consecutive game because of a hamstring injury. On a wet field and with a bye week looming, it’s easy to understand why the Bills decided not to bring back Singletary on Sunday. He should be able to return to the lineup in Week 6 at home against Miami.

Johnson missed his fourth straight game, while Foster and Thompson sat for the second straight week. Kroft has yet to play this season. Nsekhe missed his first game of the year.

8. Titans punter Brett Kern, a Grand Island native, is one of the best in the NFL at his position. He was magnificent Sunday, punting six times for 298 yards – a net average of a whopping 49.3 yards. His long punt of 56 yards came out of his own end zone.

9. The Titans placed running back David Fluellen on injured reserve Saturday . Fluellen, a Lockport native, has been dealing with a knee injury. He played in the Titans’ season opener against the Browns, then was inactive for two games. He played 16 snaps on special teams in Week 4, but was unable to practice leading up to Sunday’s game.

To take his place on the roster, the Titans activated offensive tackle Taylor Lewan to the 53-man roster to take Fluellen’s spot. Lewan, a three-time Pro Bowler, was suspended for the first four games of the season. On the first play from scrimmage, Lewan was flagged for holding, erasing a 26-yard completion to tight end Delanie Walker.

“I was really happy Lewan came back today,” Phillips said. “I’m glad he could be a part of that today. That’s all I have to say about him.”