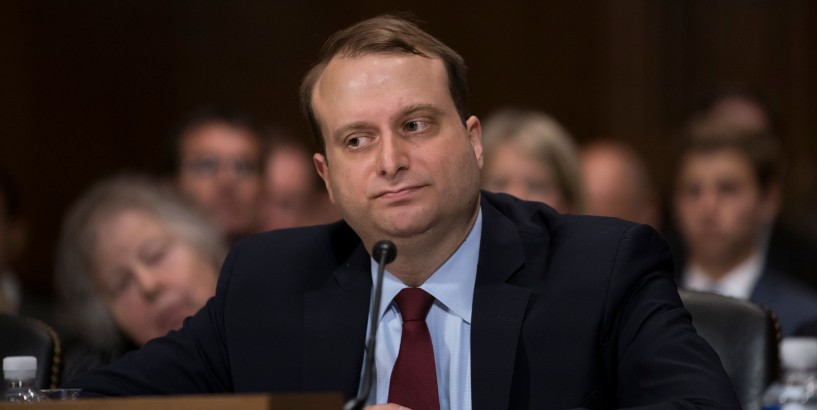 Steven Menashi Made His Senate Confirmation Hearing Even Worse Than Expected

POLITICS 09/11/2019 06:50 pm ET Updated 0 minutes ago Steven Menashi Made His Senate Confirmation Hearing Even Worse Than Expected The controversial judicial nominee angered Republicans and Democrats by not addressing the work he's done for Trump. By Jennifer Bendery WASHINGTON ― The Senate Judiciary Committee held a confirmation hearing on Wednesday for Steven Menashi, one of President Donald Trump ’s most controversial nominees for a lifetime seat on a U.S. appeals court.

It didn’t go that well.

Neither of his home-state senators from New York supports his nomination, so Sen. Mike Lee (R-Utah) introduced Menashi. And the nominee spent most of his time angering Republicans and Democrats by refusing to provide details about what he’s worked on in his current role as a White House legal adviser (yes, Trump nominated one of his own aides to be a federal judge).

“Did you work on the administration’s decision to end deferred deportation for undocumented immigrants who are receiving treatment for life-threatening illnesses?” asked Sen. Dick Durbin (D-Ill.).

“Senator, again, consistent with my duties of confidentiality to the client ...” began Menashi.

“I’m not asking what advice you gave,” interrupted Durbin. “I’m asking you if you worked on the issue of denying DACA [Deferred Action for Childhood Arrivals] status to those receiving treatment for life-threatening illnesses.”

“Senator, again, I want to be as transparent as possible ...” Menashi responded.

“That’s not an unfair question,” interjected Sen. Lindsey Graham (R-S.C.), the committee chairman and a strong Trump ally. “It’s a specific question. Did you give legal advice on the subject matter?”

ASSOCIATED PRESS White House lawyer Steven Menashi frustrated both sides by stonewalling senators' questions about the work he does for President Trump. It went back and forth like this for several rounds. Menashi, who has been nominated to serve on the U.S. Court of Appeals for the 2nd Circuit, finally said he “may” have worked on the DACA issue since he advises on immigration policy, but he couldn’t recall.

ASSOCIATED PRESS Sen. John Kennedy was not amused by Steven Menashi's refusal to answer his questions. Of course, Menashi’s hearing could have been worse. Some of his toughest would-be questioners weren’t there. Sens. Kamala Harris (D-Calif.), Amy Klobuchar (D-Minn.) and Cory Booker (D-N.J.) are all members of the Judiciary Committee, but they all missed the hearing because they’re out on the campaign trail running for the Democratic nomination for president.

Most of the fireworks around Menashi occurred outside in the hallway, where dozens of protesters clogged the walkways and led loud chants as the hearing was underway.

Capitol Police swarmed the scene and at least five people were arrested.

They can definitely hear this in the hearing. pic.twitter.com/y9Q6bkikOe

— Jennifer Bendery (@jbendery) September 11, 2019 Progressive groups are opposed to Menashi’s nomination because of his long record of opposing and undermining equality for communities of color, women and LGBTQ people. As CNN reported , Menashi has complained about “gynocentrists” participating in Take Back the Night marches, accused the Human Rights Campaign of having “incessantly exploited the slaying of Matthew Shepard ” for political benefit, and claimed that a Dartmouth fraternity wasn’t being racist when it held a “ghetto party” attended by white partygoers wearing Afro wigs and carrying toy guns.

He has also denounced women’s marches as sexual assault , opposed the “ radical abortion rights advocated by campus feminists and codified in Roe v. Wade,” and spread the Islamophobic myth that Gen. John Pershing executed Muslim prisoners in the Philippines in 1913 with bullets dipped in pig fat.

Asked about the Pershing article in Wednesday’s hearing, Menashi said he wrote it some 20 years ago (he was a public affairs fellow at the Hoover Institution at the time) and believed back then that the offensive anecdote was true, only to discover in later years that it was not.

“I regret having repeated it,” he said.

“It is clear from Steven Menashi’s long, disturbing record that he is the wrong candidate to serve on the United States Second Circuit Court of Appeals in New York,” they said. “His views are far outside the judicial mainstream and completely out of step with the overwhelming majority of New Yorkers. His confirmation to the federal judiciary would threaten the rights of millions of Americans, and we strongly urge our colleagues to oppose the Menashi nomination.”

The hallway protesters, who were with the progressive groups Demand Justice and Center for Popular Democracy, were on day two of demonstrating against Trump’s court picks. They stormed four senators’ offices on Tuesday to confront them on their support for judicial nominees who had declined to say whether they thought Brown v. Board of Education was correctly decided. They also visited Sen. Dianne Feinstein (D-Calif.), the top Democrat on the Judiciary Committee, to deliver petitions with 110,000 signatures from opponents of Menashi’s confirmation and to urge her to lead the effort to tank his nomination.

Feinstein signaled Wednesday that she hadn’t appreciated their visit.

When Graham opened the hearing, he noted that two of the offices crashed by protesters the day before belonged to other committee members ― Sens. Chris Coons (D-Del.) and Thom Tillis (R-N.C.) ― and said those senators were “basically threatened.” (That is not what happened .)

“I very much agree with those comments,” Feinstein replied.

REAL LIFE. REAL NEWS. REAL VOICES. Help us tell more of the stories that matter from voices that too often remain unheard. Join HuffPost Plus Do you have information you want to share with HuffPost? Here’s how.