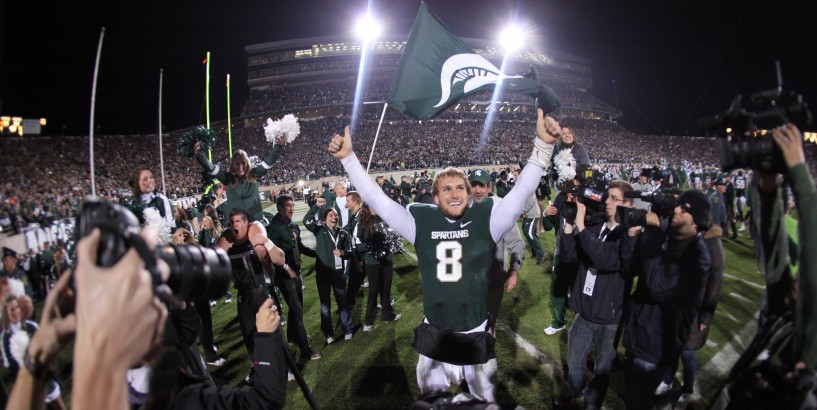 Quarterback Kirk Cousins dropped back, bought himself time and let the football fly as time expired in a play that would become one of the greatest moments in Michigan State football history. His 44-yard Hail Mary landed in the hands of wide receiver Keith Nichol on the goal line for a stunning 37-31 upset victory over Wisconsin at Spartan Stadium. Replay reversed the call on the field, improving MSU to 6-1 near the end of an October stretch that already included games against Ohio State and Michigan. Cousins will relive the "Rocket" game through a replay at 8:30 p.m. Friday on Big Ten Network, where he will post live commentary on his Twitter using the hashtag #BTNKirkCousins. Additionally, a special edition of B1G Video Recall will debut on BTN’s Facebook and YouTube pages at 8 p.m. May 22 to give fans an in-depth look at the crucial moments and memories made from the game. Entering his ninth NFL season, Cousins will be joined in the project by former teammates Nichol, cornerback Darqueze Dennard, wide receiver Bennie Fowler and defensive tackle Jerel Worthy, along with former coach Mark Dantonio and basketball coach Tom Izzo. Included will be memorandums of MSU’s 23-0 second-quarter push to take a halftime lead, Wisconsin quarterback Russell Wilson’s late touchdown pass to tie the game and the last-second heroics from Cousins that capped off his 290-yard, three-touchdown performance without an interception. MSU finished the 2011 season 11-3 overall and 7-1 in the Big Ten with a win against Georgia in the Outback Bowl. While watching Friday’s rerun, viewers will be encouraged to donate to Feeding America in a response to the coronavirus pandemic. BTN will match the first $10,000. Evan Petzold is a sports reporting intern at the Detroit Free Press. Contact him at epetzold@freepress.com or follow him on Twitter @EvanPetzold .