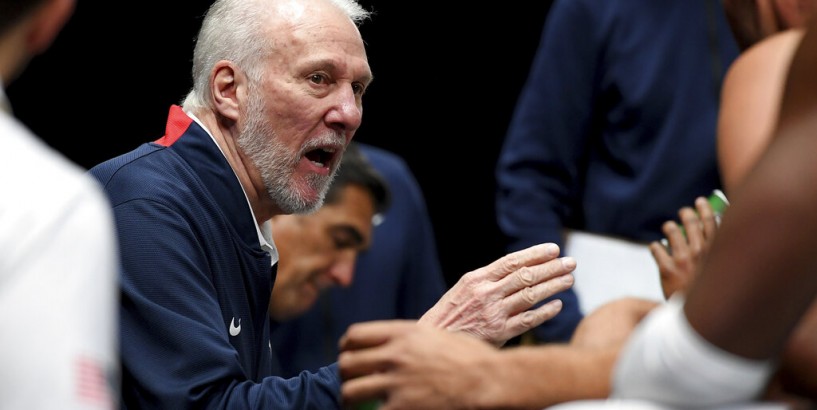 Veteran United States basketball coach Gregg Popovich insists his team are better for their shock loss to Australia, which has thrown the upcoming World Cup in China wide open.

US head coach Gregg Popovich talks to player in a time-out during their exhibition basketball game in Melbourne, Thursday, Aug. 22, 2019. (AP Photo/Andy Brownbill)

The Boomers’ 98-94 upset in Melbourne on Saturday was their first ever victory against the USA and snapped a run of 78 consecutive American wins in major competitions and exhibition games.

The defeat came barely a week before the World Cup tips off, where the five-time champions will be defending their title.

And they suffered another setback with Los Angeles Lakers forward Kyle Kuzma ruled out of the tournament with a left ankle injury.

San Antonio Spurs mastermind Popovich, who has a young squad after a host of high-profile NBA stars opted out, said it was all part of the learning curve.

“The loss means that we need to play better, and it’s a measure of who you are. Nobody wins forever,” he said.

“Our job is to try to get better every day, and we learned some things (against Australia),” he added.

“We are actually a better team now than at the start of the game, because of the knowledge that we gained. So, you move on.”

The game was an even affair until the third quarter when the USA steamed 10 points clear, but they couldn’t capitalize and Australia clawed back to take a narrow two-point lead into the final 10 minutes.

It was here that guard Patty Mills, who Popovich coaches at the Spurs, exploded, ending with a game-high 30 points to give the Boomers a famous win in front of 52,079 fans — a record for a basketball game in Australia.

Popovich, who has one more warm-up game against Canada in Sydney on Monday to iron out any issues, said they were not good enough defensively.

“But we didn’t hold them to where we needed to defensively, and to us its obvious that that’s what we have to be. We have to be a good defensive and rebounding team.”

Utah guard Donovan Mitchell, who sank 12 points, echoed Popovich that it was a learning experience, noting that the squad had only been together for a few weeks, in contrast to the Australians who have had a core group of players for years.

“We just got to talk a little bit more and communicate,” he said.

“And, at the end of the day, that being said, we’ve been playing with each other for about two-and-a-half weeks. We got to be able to figure each other out at a faster pace.”