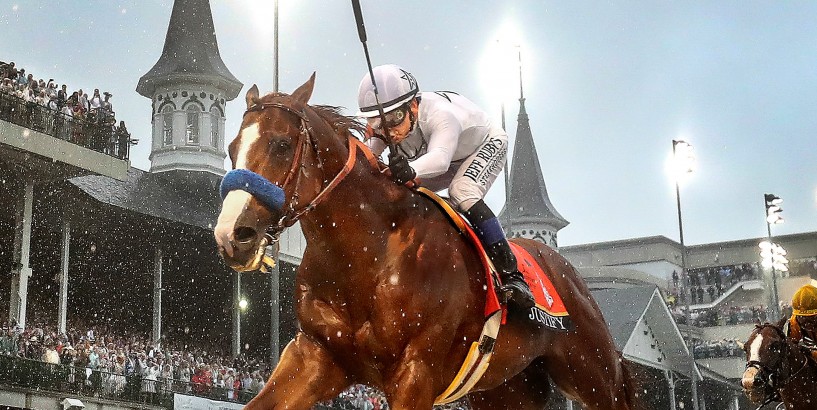 One of the greatest runs in horse racing history might have been tainted. According to a report from The New York Times , Triple Crown-winning thoroughbred Justify failed a drug test in the weeks leading up to the 2018 Kentucky Derby but was still allowed to race in all three events, winning the Derby, Preakness Stakes and the Belmont Stakes en route to the crown jewel of horse racing. The test, which was taken on April 7, 2018, after the colt won the Santa Anita Derby, in California should have triggered an automatic disqualification from the Derby under the current rules. The first notice of the positive test was sent on April 18. The California Horse Racing Board took months to confirm the results of the test and made several decisions in secret to drop the case and soften the penalty for any horse with the substance, scopolamine, that was found to have been in Justify's system, according to the story. Justify's trainer, Bob Baffert, was notified of the positive test on April 26, 2018, and asked, per his due process, that an independent laboratory test another sample. It was sent out on May 1, 2018, four days before the Derby, and confirmed on May 8. The board was notified of the second positive test of scopolamine, a substance that can be used "to clear a horse's airway and optimize its heart rate" according to the report. The amount of the substance, which also can be found in jimson weed and sometimes can be ingested by horses while feeding on hay, was excessive. On the same day, May 8, the California board was notified of the results and released a statement saying “The C.H.R.B. investigations unit will issue a complaint and a hearing will be scheduled,” but the board never filed the complained and the hearing never happened. On Aug. 23, 2018, the board met in an executive session and in a unanimous vote, chose not to proceed with the complaint and hearing against Baffert. The story states that reviewed documents did not reveal any evidence "of pressure or tampering by Justify’s owners. Horse racing, however, is uniquely insular." By the time the extended process concluded, Justify had won the Triple Crown. Justify won the Derby by 2 1/2 lengths over Good Magic with a time of 2:04.20 with jockey Mike Smith aboard.