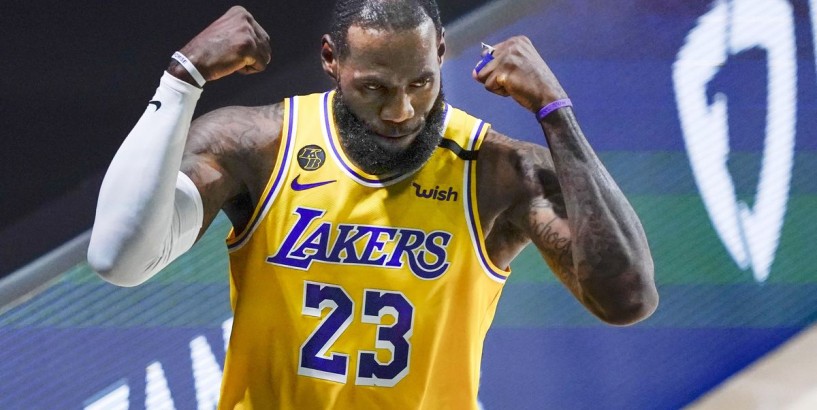 James and Lakers advance with 131-122 win over Trail Blazers

Gary Trent Jr.’s 3-pointer tied it at 109 with just under seven minutes to go. Again the Lakers held off Portland with Kentavious Caldwell-Pope’s 3.

The game was originally set for Wednesday night, but players collectively decided not to play in the three playoff games scheduled for that day to protest racial injustice following the shooting of Jacob Blake in Kenosha, Wisconsin. Games on Friday were also postponed.

Lillard injured his right knee in Game 4 that prompted him to leave the bubble in Florida and return to Portland to see team doctors. Lillard was named MVP of the seeding games heading into the playoffs, averaging 37.6 points and 9.6 assists in eight games.

Trent Jr. took his Lillard’s spot in the opening lineup. But because of injuries the eighth-seeded Blazers had just nine players available for the game.

Portland’s lone win in the first-round series came in Game 1.

Trail Blazers: In addition to Lillard, Portland was without Zach Collins because of left ankle inflammation, Nassir Little with dehydration and Wenyen Gabriel with right quad tendonitis.

Lakers: Rajon Rondo practiced on Friday but remained inactive for Game 5 as he recovers from a fractured right thumb and back spasms. … Dion Waiters was game-time decision with a migraine but was available.

MOURNING UNCLE CLIFFY: There was a moment of silence before the game for former Trail Blazer Cliff Robinson. He died Saturday at 53.

Robinson played 18 seasons in the NBA, his first eight in Portland, and later made the city his home. Portland players also wore headbands during the game in his honor.

“His personality and energy were unmatched, and his contributions on the court were unmistakable, helping the Trail Blazers into the playoffs each of his eight seasons with the team,” the Blazers said in a statement.