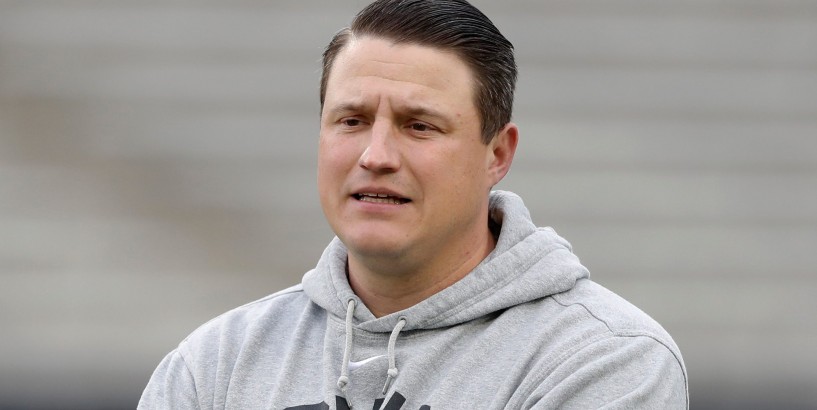 Brian Ferentz said he used his Saturday without an Iowa football game to be present as a husband and a father. “I’ve got four little ones at home,” the Hawkeyes' 36-year-old offensive coordinator said Wednesday night during his twice-annual appearance on Hawk Central radio, referencing daughters Presley, Connolly, and Jolie, and son John. "So, there’s no schedule in our house." But Ferentz did confess to sneaking a few peeks at the TV to catch some game action, something he normally doesn’t get to do on Saturdays while calling plays for the Hawkeyes. And as he described his impressions of an eye-opening weekend of football — which included Wisconsin’s rout of Michigan — he was also indirectly sending a message to his own team. "What’s impressed upon you is when you watch those games," Ferentz said, "if you’re not doing things right; if you’re not worried about the things that are going to help you win football games and take care of the details; (if you’re not) making sure that you’re playing fundamentally sound, that you’re improvement-driven, that you’re disciplined in the approach to your preparation … then certainly things may not go well for you on any given Saturday.” As his 3-0 Hawkeyes deal with prosperity as the nation’s No. 14-ranked team , there is a growing target on their backs. Saturday’s 11 a.m. home game against Middle Tennessee State (1-2) is a test Iowa can’t afford to overlook. The Blue Raiders have been bowl-eligible in nine of their past 10 seasons under Rick Stockstill and are accustomed to playing in challenging environments. They historically play one of the tougher nonconference schedules in the country. (They have games against Michigan, Duke and Iowa this season.) To accentuate his point, Ferentz referenced a 2011 Quote: from former heavyweight boxer Mike Tyson: “If you’re not humble in this world, then the world will throw humbleness upon you." “I think it’s a good reminder for our football team, if you want to be good and do anything that’s worth accomplishing, that’s going to take some humility,” Ferentz said. “You need to understand that you’ve never arrived. You’re never there. That every opponent is dangerous. You must respect the game and what it takes to win. “If you do those things, usually, I think, you can live with the results. Plenty of reminders last week why that’s so important.” Subtle shots have been taken toward teams in Ames and Lincoln and media in Columbus, Ohio . Wednesday night, though, he opened with an unprompted apology. “I just wanted to start by telling (two Register reporters) that I thought last week they asked me a very good and professional question,” Ferentz said, “and I don’t think I answered it very well.” The topic — Oliver Martin playing two snaps against Iowa State — initially brought a terse response from Ferentz during a press conference with Iowa coordinators one week earlier. He said, “That’s your problem” in regards to media fielding one of the most common questions about the 2019 Hawkeyes: the Michigan transfer’s limited role at wide receiver. Ferentz on Wednesday went on to praise Martin on many levels — for his ability to learn three positions (a huge benefit to play-calling, once he’s fully up to speed) and his assimilation to Iowa's promising wide receiver room. Martin has been the No. 5 receiver in Iowa’s first three games but does have four catches for 24 yards and a touchdown. “I think the trick for us right now is to get everybody involved,” Ferentz said. “What’s encouraging is that they’re all improving, they’re all continuing to grow. “The one thing I would just tell everyone out there is, as we’re learning with some of the injuries we’re dealing with right now, we’re going to need everybody as the year goes on. Really pleased with (Martin’s) progress; really pleased with the progress of the whole group. “But I wanted to clean that up, because I don’t think I gave you guys a very professional answer. And, dare I say, I was a little rude to you. So, my apologies. And thanks for having me tonight.” That’s a sign he’s been very happy with an offense that’s proven to be efficient in controlling the ball and scoring points (Iowa ranks fourth nationally in time of possession, first in red-zone scoring percentage and sixth in turnover margin). Iowa has relied upon five receivers, four running backs and nine core offensive linemen during their unbeaten start. “Probably what I’m most excited about or, you know, feel pretty good about,” Ferentz said, “is the fact that I really believe we’ve developed some depth over the last three weeks.” Hawkeyes columnist Chad Leistikow has covered sports for 24 years with The Des Moines Register, USA TODAY and Iowa City Press-Citizen. Follow @ChadLeistikow on Twitter.