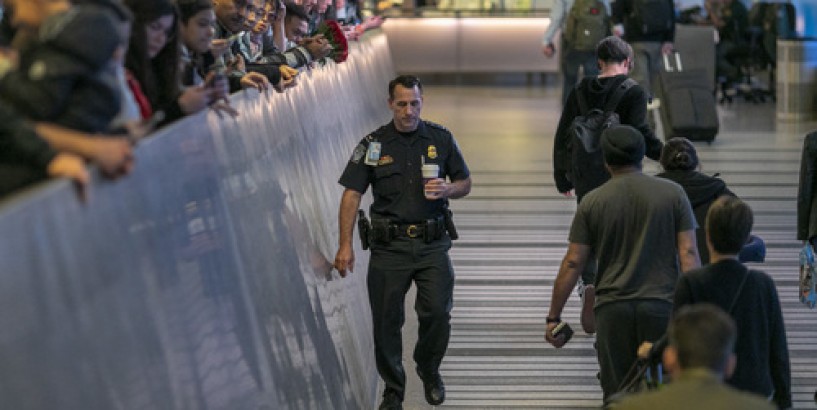 Travel and the coronavirus pandemic: Everything you need to know

Countries around the world have imposed sweeping travel bans and advisories to stem the spread of coronavirus within their borders and beyond.

Canada and the US will close their border to non-essential travel, US President Donald Trump confirmed on Twitter Wednesday.

Nonessential travel to the European Union has been banned for 30 days , the European Council announced Tuesday. Repatriation of EU citizens, “where necessary and possible,” will also be arranged, the council said.

President Trump on Monday advised Americans to avoid groups of more than 10, to stay away from bars and restaurants and to avoid discretionary travel.

Many travelers returning to the United States from overseas over the weekend were met with long lines and confusion at airports where enhanced screening has been implemented for Americans and legal permanent residents returning in the wake of the Europe travel ban announced on March 11.

The ban bars US entry to foreign nationals who have visited much of Europe in the previous 14 days.

Trump said Saturday that travel restrictions within the United States are being considered.

Flights have been drastically reduced and widespread closures of public areas — and in some cases citywide or countrywide lockdowns — are in effect.

The last sailings by many major cruise lines are wrapping up, following a suspension of cruise operations. Several cruise ships, some with confirmed cases of coronavirus on board, are stranded at sea .

The US State Department raised the worldwide travel advisory to Level 3 on March 11 — meaning citizens should reconsider travel abroad.

“The Department of State advises US citizens to reconsider travel abroad due to the global impact of Covid-19. Many areas throughout the world are now experiencing Covid-19 outbreaks and taking action that may limit traveler mobility, including quarantines and border restrictions,” the statement said.

The US State Department’s warnings for China and Iran are at the highest level — Level 4: Do not travel — as are some areas of Italy and South Korea .

The US Centers for Disease Control and Prevention has its own list of travel advisories posted online. The CDC has advised older adults and other higher-risk groups to “stay home as much as possible.”

Canadian Prime Minister Justin Trudeau on March 13 told Canadians to curtail nonessential travel outside of the country. The cruise ship season will be suspended until July, Trudeau said.

New Zealand Prime Minister Jacinda Ardern announced that the country will close its borders to all non-citizens and non-residents as of 11:59 PM on March 19.

So far, nearly all of the country’s 28 confirmed coronavirus cases are linked to overseas travel.

Neighboring Australia has enacted similar measures. Australia will no longer allow entry to non-Australian citizens or residents, unless they are direct family members of Australians as of March 20.

Overseas Australians who return to the country after March 20 will be subject to a 14-day quarantine.

Thailand will require health certificates for all incoming travelers, the country’s Civil Aviation Authority announced on March 19. Travelers will need proof of medical insurance, a doctor’s certificate and proof that they have not traveled to certain high-risk areas.

Spain’s foreign ministry has advised its citizens to avoid “all but urgent travel,” according to a statement.

Canada and the United Kingdom are among many other other nations that have issued travel warnings for high-risk destinations.

Colombia will close its land, sea and air borders from March 19 until May 30, although there will be exemptions for cargo ships.

Guatemala has closed its doors to all non-citizens, and returning citizens will have to be quarantined.

In addition to the Europe travel ban, the closed US-Canada border and restrictions imposed by the US on arrivals from Iran and China, the European Union is closing its external borders for 30 days.

Many other nations have banned certain arrivals, closed borders or suspended visas. CNN Travel is keeping up with that list here.

Make sure that your destination has not restricted your arrival before embarking on an international trip, keeping in mind that the situation is evolving quickly and new restrictions are likely.

All travelers should avoid contact with sick people and clean their hands frequently.

Airlines have scrambled to adapt operations to travel bans and a staggering drop in global demand.

American Airlines is implementing a “phased suspension” of additional international long-haul flights through May 6. The move will reduce international capacity by 75% year over year. Details of its international route changes are posted on the airline’s website.

Delta Air Lines also has a hub of information online related to the impacts of coronavirus, including details on change-fee waivers good for travel in March or April and for tickets booked in March.

Air France , KLM and other carriers across the globe have also implemented schedule changes and flexible rebooking policies.

Globally, airlines have slashed flights amid the outbreak, with many suspending service to hard-hit countries such as China and Italy. They’ve also slashed domestic service and other routes following a precipitous drop in air travel.

Australian airline Qantas and its subsidiary Jetstar will suspend scheduled international flights from late March until at least the end of May. Air Canada will gradually suspend the majority of its international and US trans-border flights by March 31.

Ryanair said it expects that “most if not all” its flights will be grounded by March 24.

The pandemic’s damage to the aviation industry is severe: US airports are seeking $10 billion in government assistance to offset losses spurred by the coronavirus outbreak, an airport industry source tells CNN.

Travelers with upcoming bookings should look for advisories and instructions posted on carriers’ websites.

Amtrak has deeply cut some rail service in the US because of a drop in demand. Amtrak is waiving change fees on all existing or new train reservations made before April 30.

Airlines have bumped up their sanitation efforts to stem the virus’ spread, and the US Centers for Disease Control and Prevention has posted guidance on aircraft cleaning .

Delta Air Lines started using a fogging technique in February “with a highly effective, EPA-registered disinfectant” on flights arriving in the United States from Asia and has expanded that procedure more widely.

“Even if there is virus in the inanimate environment, it’s not going to jump off the seat and bite you in the ankle,” says Dr. William Schaffner, a professor of medicine in Vanderbilt University’s division of infectious diseases.

“You’ve got to touch it, and then touch your nose or your mouth. So it’s those hands we have that are the important intermediary. And that’s where I would put the emphasis,” he said.

Wash or sanitize your hands after touching surfaces in airports and planes.

“Hand sanitizers are great. So are antiseptic hand wipes, which you can also use to wipe down armrests, remote controls at your seat and your tray table,” said travel medicine specialist Dr. Richard Dawood.

The CDC advises washing hands often with soap and water for at least 20 seconds. An alcohol-based hand sanitizer with at least 60% alcohol can be used when soap and water are not available.

Schaffner has received a lot of questions about whether people should be wearing masks to avoid infection.

He realizes it’s culturally very common in Asia, but he says the CDC doesn’t recommend it for the general public because “the scientific basis showing that people in the community wearing masks actually has any benefit is very thin and questionable.”

If you are sick, wearing a face mask when you are around other people can be helpful, according to the CDC . But those who are symptomatic should avoid travel.

Foreign nationals who have visited China, Iran and much of Europe in the past 14 days are barred from entering the United States.

Ireland and the United Kingdom and 26 countries in the Schengen Area are affected by the Europe ban.

Enhanced screening is in effect in for American citizens and legal permanent residents returning to the US from the designated high-risk countries and those travelers are required to arrive through the following 13 US airports:

Princess Cruises has suspended global operations from March 12 to May 10, and Royal Caribbean , Norwegian and Carnival have suspended outbound cruises for about a month.

Viking is temporarily suspending operations of river and ocean cruises from March 12 to April 30.

Virgin Voyages has postponed the maiden voyage of its first cruise ship, Scarlet Lady, until August.

Hurtigruten , which is known for its sailings in the Nordic region such as the Norwegian fjords, has suspended all sailings effective through the end of April.

The US State Department issued an advisory on March 8 warning against cruise travel.

“US citizens, particularly travelers with underlying health conditions, should not travel by cruise ship,” the warning reads.

Some ships that set sail before the advisory are stranded at sea.

All reservations made before March 14, with check-in dates from March 14 through April 14, qualify for penalty-free cancellations. Both hosts and guests may choose to cancel the booking.

Rental company Vrbo has not offered Covid-19-related exceptions but recommends that travelers reach out to homeowners to request fee-free cancellation.

Marriott International hotel company has outlined penalty-free cancellation for rooms, including those that were pre-paid, up to 24 hours prior to arrival for changes and cancellations made by April 30.

Check with your hotel about modified cancellation and booking policies.

The United States has seen widespread cancellations of large events aimed at stemming the spread of coronavirus, while some states are ordering the closure of bars and restaurants .

Sporting events are among the events being called off. The Kentucky Derby has been rescheduled for September , NASCAR will not hold any races until May 3, and the WWE will hold its annual WrestleMania event in an empty arena.

In New York City, Ellis Island and the Statue of Liberty are both shutting to visitors as of March 17.

On March 12, Disney announced it’s closing Walt Disney World, in Orlando, Florida, as well as its Disneyland resort in California and Disneyland Paris. The company also said that it will suspend departures with the Disney Cruise Line through the end of the month.

In Paris, the Louvre and the Eiffel Tower closed March 13, and Italy’s countrywide lockdown means all museums and archaeological sites have been shuttered.

Some museums in South Korea, Japan and elsewhere have closed temporarily to stem the spread of the virus.

Disney parks in Asia are closed, as is Universal Studios Japan, and some of Japan’s cherry blossom festivals have been called off.

In Shanghai, Disney has reopened some shops and restaurants but the theme park remains closed.

In Thailand, several official Songkran (Thai New Year) festivals, due to take place in mid-April, have been canceled .