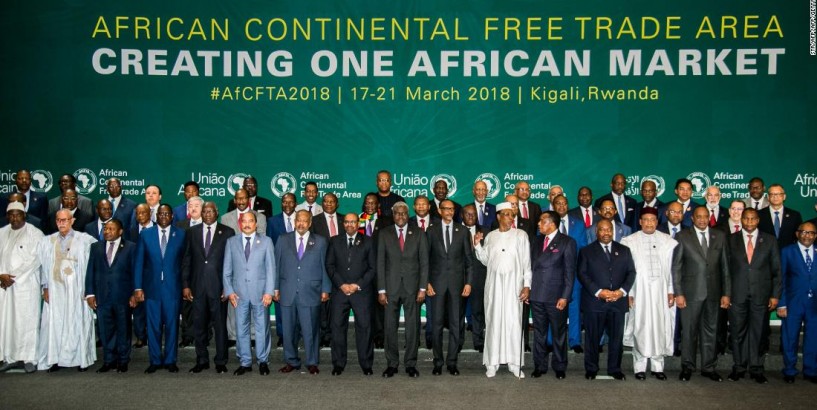 CNN's series often carry sponsorship originating from the countries and regions we profile. However, CNN retains full editorial control over all of its reports.

(CNN) Since the United Kingdom voted for Brexit three years ago, the European Union has been struggling to work out a structure for its future relations with the country.

While debates about the unpredictability of economic and political relationships between the EU and Britain continue to linger, thousands of miles away, the African Union (AU) is creating a close-knit relationship among its own 55 member nations. In 2013, the AU designed Agenda 2063 , a framework with set objectives to aid the socio-economic transformation of the continent over the next 50 years. The vision is to maintain integration of Africans on the continent, according to Khabele Matlosa, the organization's Director of political affairs. "The goal is to realize the union of an integrated, prosperous and peaceful Africa driven by its own citizens," he told CNN. Read More One of the ways the union is doing this is through the proposed launch of a continental passport known as the AU passport. The passport will grant visa-free access to every member state so Africans can move freely across the continent. Presently, only Seychelles and the Republic of Benin have no visa restrictions for Africa travelers. The visa problem When Aliko Dangote, Africa's wealthiest man, announced in an interview with Sudanese billionaire, Mo Ibrahim, that he carries around seven passports to fit all of his Africa travel visas, the question on everyone's lips seemed to be: even Dangote? Despite being one of the largest investors on the continent, and owning an exclusive copy of the AU passport from its first launch in 2016, Dangote is not exempt from the bureaucracy of visa processes. "I was invited by the president of Angola to come and see him, and I had to go," he said in the video "When I went there, I had to be given visa on African Union passport. It is not about fees, when you say African Union passport, you should be able to go everywhere, free of charge."

(The Dangote Group, owned by Aliko Dangote, sponsors CNN's Marketplace Africa series) The AU passport is not yet available to the public but is exclusive to heads of state, top diplomats and persons of interest in Africa. Sky's the limit as Africa makes major move towards aviation single market Rwandan President, Paul Kagame and former managing director of the World Bank group, Ngozi Okonjo-Iweala all have copies. Dangote is not alone in his Africa travel travails, says Adedamola Idowu, who runs a travel agency on the continent. Even citizens of the same regional political and economic blocs find travel challenging. Only one regional union, the Economic Community of West African States (ECOWAS), allows its passport holders to move around their region visa-free. "Until we get a passport like that of the EU, it will remain difficult to travel within Africa," Idowu said. When implemented, the passport is supposed to eventually substitute individual nation's passports and visas so anybody with a copy can travel to different regions unhindered. The passport is supposed to come into effect after ratification by the parliaments of at least 15 African countries. But according to Khabele Matlosa, AU director of political affairs, only Rwanda's parliament has ratified it. Economic growth But easy travel within the continent is not the passport's only objective, it is also about opening up borders for economic growth and Intra-Africa trade. Financial analyst, Bismarck Rewane, says free movement of people and goods across the continent is a recipe for economic growth as the EU example has shown. "The benefits are clear, Nigerians will be able to import and export more. There will be a bigger market and free flow of goods" he said. There's a substantial amount of evidence to show that free movement boosts the economies of countries. Residents of other countries are able to contribute skills for human capital development and to the labor market of the receiving countries. Tourism in Seychelles, for example, improved by seven percent every year between 2009 to 2014 when the country became visa-free for Africans, according to a 2016 report by the African Union and the African Development Bank. Follow CNN Africa on social media Read the latest news from Africa and share your thoughts with us on Facebook , Twitter and Instagram

By 2015, due to its increased revenue, the country had become high income, advancing in service industries and real estate. But Rewane says Africa's continental free trade agreement, when compared to the AU passport should be the first option for promoting economic and trade growth on the continent. "The free trade agreement is the first step towards an economic union," he said. Africa Continental Free Trade Agreement The Africa Continental Free Trade Agreement (AfCFTA), one of the AU's frameworks to keep the continent integrated , is an agreement allowing free access to markets and market information in Africa. In 2018, leaders of 44 African countries met in Kigali, Rwanda's capital city and endorsed the AfCFTA . Since then 52 countries, including South Africa, have joined in. The agreement creates a single market that removes trade barriers says Hafsatu Lawal Garba, one of the researchers who worked on the AfCFTA. By removing barriers, it will allow Africa owned companies and businessmen to expand and enter new markets. This, in turn, widens their customer base, leading to new products and services. "The agreement will result in the socio-economic development, industrialization, and diversification on the African continent," Garba told CNN. And since only about 10% of Africa's total Gross Domestic Product is from the manufacturing industry, the trade area if successful could make the sector more competitive and promote economic diversification. According to Garba, the AU passport will be put to maximum use if it is accompanied by the AfCFTA. Both frameworks will harmonize the movement of people and goods within the continent without hindrance. The integration struggle While the AU may want a bond similar to the EU, where its 1.2 billion people can move freely between countries, it still faces the struggle of trying to integrate a multi-faceted continent. Africa has a multitude of regional and national trade interests and actors. Given that member countries are heterogeneous, ensuring cooperation among them will take a lot of work, says Judd Devermont, Africa program director at the Centre for Strategic and International Studies. For example, Nigeria, the most populous country in Africa and its largest economy, is refusing to sign the free trade agreement due to the uncertainty of how it will affect its small business sector. "The success of the plan to integrate African countries depends on how the content of Afcfta and AU passport are implemented," Devermont told CNN. Despite glaring challenges, the African Union is hopeful that African leaders will become more open to the idea of a more integrated continent. "We are banking on countries to demonstrate political leadership to ensure all the member states work on their implementation," AU director Matlosa said.