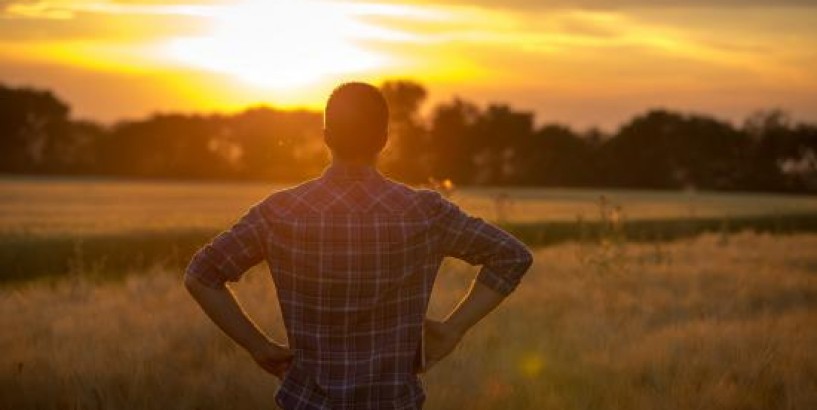 How To Thrive On the Edge of Chaos: A Guide for Farmers

Vance Crowe is a communications consultant who thrives on chaos. He is a keynote speaker at the Land Expo 2020 in Des Moines on January 14. Successful Farming magazine caught up with him ahead of time to get a preview.

SF: What will you cover at the Land Expo? VC: My talk is called The Edge of Chaos, where and how society changes. What is accepted, what is desirable, and what is not allowed in a society? There is a difference between perceptions in the countryside and the city. What ramifications does this have for how things will be done in the future with agricultural lands, whether that’s growing crops or raising animals? Which perceptions and demands of people living in the city are fads, and which ones actually have a chance of radically changing the way land is being managed?

SF: What is your background? VC: I’ve only been involved in agriculture for the last five years. Before that, my jobs varied widely. I ran a camp for inner city kids, was a deckhand on a ship that traveled around the Western Hemisphere, lived in Africa as a Peace Corps volunteer, worked in public radio in northern California, worked at the World Bank, and then worked at Monsanto.

It has been an interesting journey. I have seen how ideas started and then flowed out into society. That became very real for me when I was working at Monsanto. A group of people who disagree with modern agriculture can alter the public’s perception of the way the world ought to change. I saw what happened when society and culture turn against certain components of agriculture.

READ MORE: Meet Vance Crowe: The Man Building a Network to Rally Against the Pseudoscience Attacking GMOs SF: What can we learn from that Monsanto experience? VC: Things you think are certain can change. The Overton window can shift on you. Changes in society that you couldn’t imagine can happen. Even if you know something is far better for society, it may reject it.

On the other hand, you can change perception with enough coordinated effort. Five years ago, there was a lot of concern about whether or not you should eat GMOs, and that fight has basically dissipated. There are people who still think that, but the issue is nowhere near at the velocity and temperature that it was before. Agriculture figured out that it was a technology people didn’t understand, so we have to explain it to them. Otherwise they will become so impassioned that they won’t let us use this technology.

SF: What do you make of the glyphosate lawsuits? VC: Catastrophic. It is the manifestation of how our legal system can be profited by individuals. If you can sue glyphosate, you can do that to any chemical, because glyphosate is one of the most innocuous. That has very serious implications for the future.

It is a challenge to be in the number one spot. People focus on you. The companies in the number two, three, and four spots don’t jump up to help you out. They kind of scoot back and let you take the slings and arrows, even though they all have a shared interest in genetic engineering or crop protection. They say, Monsanto is the one being sued for glyphosate, it’s not really our problem, we’re going to stay out of this. But if you can knock glyphosate out, any chemical in their portfolio could get knocked out.

SF: Is our society on the edge of chaos? VC: Societies won’t live in chaos. It’s not acceptable. They will accept suboptimal conditions before they will accept not knowing. So people will choose a certain future that is less good, rather than an uncertain feature with lots of potential.

There are good things that can come from chaos. If you stay too much on the ordered side of life, you don’t make the changes you need to make to evolve and thrive and get better. If you’re too ordered, you become tyrannical.

SF: Can you benefit from chaos? VC: The people who thrive the most in these situations are the ones who are the most curious about the chaos – the ones most interested in learning what is on the edge. It’s good to have opinions, but loosely hold them so that other people can give you a good argument that makes sense. Be willing to change and adapt and not be so rigid that you break.

The only way you make change is if you get up there on the edge of chaos. You figure out what changes society is asking us to make that we should make, and which ones are unreasonable demands that we should find a way to convince them otherwise.

READ MORE: Growing Your Online Tribe SF: Where do you see GMO technology globally? VC: Kenya, a place I used to live in while in the Peace Corps, is close to approving BT. Once farmers see the benefits of genetic engineering traits, you may watch the adoption of genetic engineering technology in a place that gets more sunlight than anywhere else on earth – the continent of Africa. They are adding technology in a very big way. That will change global agriculture. It will change where countries like China look to do trade deals.

SF: What other technologies are you watching? VC: Synthetic biology, whether it pertains to synthetic meat or other types of products that were naturally grown, is coming on in a big way. Where do farmers fit into that? Don’t focus on the micro issues, because this is starting to blossom all over the world.

SF: Plant-based proteins get livestock producers upset. VC: Farmers either get mad or they get very dismissive of it. The biggest impact of synthetic meat is not going to be the burgers and steaks that the beef industry is so worried about. It’s going to be pet food. It’s like what the rebar market in steel did to the steel manufacturers. In Mexico, they built these tiny foundries that made cheap steel, and they stole 3% from the steel market, which was enough to grind that to a halt in the United States. Synthetic meat is going to enter through the pet food market, or some ancillary market that isn’t going to compete on taste and texture.

SF: Is gene editing important? VC: Absolutely, with 100% certainty. The things that are possible to do with precision gene editing over the long term are so mind bending as to be difficult to believe. It will have profound implications not only on the way we grow things, but also what we grow.

SF: What technologies could be the most valuable for farmers? VC: Sensors will become inexpensive to put in people’s fields. Sensors can start figuring out exact applications of nitrogen for your field, meter by meter. Farmers will be able to conduct those tests themselves; they won't have to wait for an agronomist or a seed company to come by and tell them what to do. That’s coming very soon.

SF: What about hemp and the CBD oil market? VC: I happen to know quite a bit about banking and the marijuana system. Banking is one of the biggest impediments, but once that flips and you can now start loaning on capital for hemp or for marijuana production, that is when the whole game takes off. Marijuana has been held off because you haven’t been able to do proper banking. We are within six months of that flipping, and then you’re going to see a whole bunch of bankers looking for farmers to be taking those loans.

SF: How about ag biologicals? VC: There has not been a new active ingredients for crop protection approved by the USDA in the last 20 years. The rise of biologicals is because they’re regulated in a completely different way. You’re bringing it in through a side door. There is way more innovation going on there. A lot of it is snake oil, but some of it is solid gold. Biologicals are going to come on in a big way in feed. It’s a way to lower methane emissions.

SF: Is Bitcoin still hot? VC: I love Bitcoin. That’s one of my favorites. It’s held its value. It’s far and away the best investment I’ve ever made by orders of magnitude. I was in pretty early.

SF: What else are you thinking about? VC: There is a concept called the intransigent minority. It was developed by a brilliant guy named Nassim Taleb, who’s a mathematician that hates genetic engineering. He really hated Monsanto. The intransigent minority is the number of people you need in a given society to be absolutely entrenched on an idea that society relents to them and gives them whatever they want. For example, how many vegans would you need before you require all food to be vegan. Or organic?