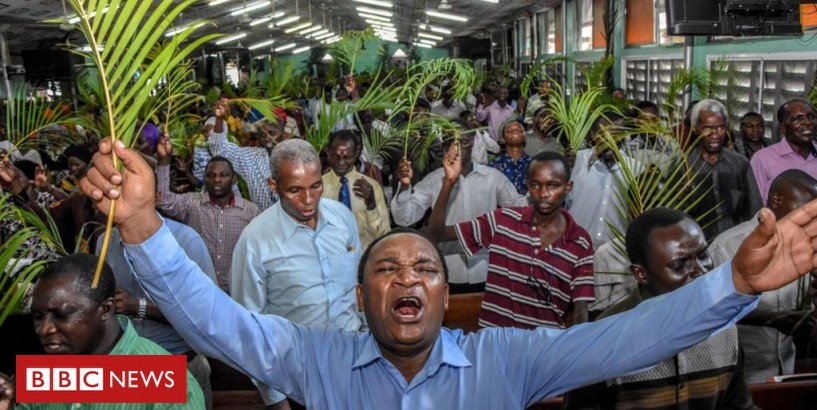 The World Health Organization has also expressed concern about the government's strategy. The authorities have been slow to reveal official data.

Despite its warning on Wednesday that the chance of contracting the virus was "extremely high", the US embassy did not provide details backing up its claim that hospitals in the commercial hub, Dar es Salaam, were struggling to cope.

Speaking at a church service in his hometown of Chato, north-west Tanzania, President Magufuli revealed that his own child had contracted the virus but was now well and "doing push-ups".

He said the child had made a recovery following a regimen of self-isolation, steam inhalation, and lemon and ginger juice, the BBC's Sammy Awami reports from Tanzania.

But there is no evidence that these treatments work, doctors say, and the vast majority of people with coronavirus will recover. Image copyright AFP Image caption Health measures are in place but much of life has carried on as normal

Mr Magufuli did give some details of numbers over a fortnight after the last official numbers had been released.

According to the president, Dar es Salaam's Amana Hospital, which at one point was treating 198 Covid-19 patients, today has only 12 patients with the virus. Other hospitals in Dar es Salaam have experienced similar decreases, he added.

"The way I see this trend, if the week beginning from tomorrow continues like this, I plan to open places of higher education so that our students can continue with their studies," he said.

He added that plans to quarantine tourists could also be relaxed next month.

According to data from the African Union's Centres for Disease Control and Prevention, Tanzania has had 509 recorded coronavirus cases and 21 deaths.