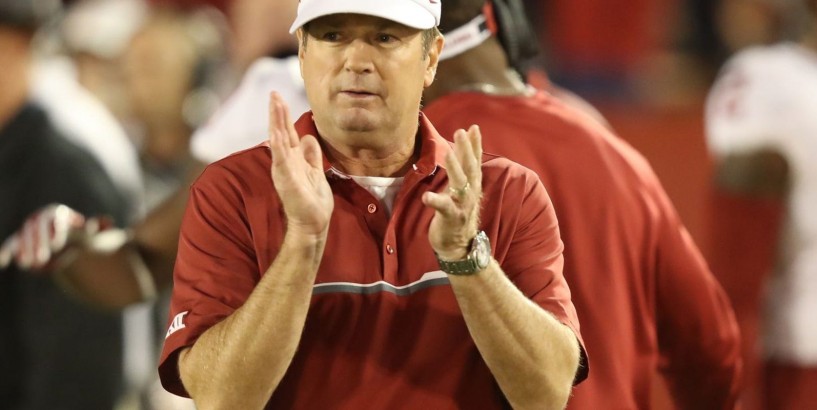 Florida State made the decision to fire coach Willie Taggart on Sunday and will need a new head coach for the 2020 season. Taggart went 9-12 in his first 21 games and was fired before the end of his second season in charge of the Seminoles. The firing comes after FSU (4-5, 3-4 ACC) was blown out 27-10 by Miami on Saturday . Who will the FSU administration turn to in order to get the program back on track? Florida Sate beat writer Wayne McGahee III takes a look at five candidates that could be head coaching targets for the Seminoles. Dallas Renegades coach/general manager Bob Stoops Coaching record: 190-48 Salary: $5.25 million (at Oklahoma in 2017) Stoops retired following the 2017 season at Oklahoma after 18 seasons as the head coach of the Sooners. He unretired to take over the XFL’s Dallas Renegades as the head coach and general manager in February. Stoops is a coaching legend that took over the OU program in 1999. The Sooners won the national championship in 2000 beating FSU in the National Championship game. He won 10 Big 12 titles during his tenure. He has ties to the state of Florida from when he was Florida’s defensive coordinator from 1996-98 and has won multiple coach of the year awards. The Sooners finished with 10 or more wins in 14 of the 18 years that he coached. Sources have told the Democrat that FSU would be looking to bring in an established coach that's a known winner and that Stoops would likely be at the top of the list. Iowa State coach Matt Campbell Coaching Record: 59-37 Salary: $3.6 million Campbell, 39, has been a hot name around the coaching world for his performance at Iowa State. Campbell took over an Iowa State program that was 5-19 the two years prior to his arrival. The Cyclones went 3-9 in Campbell’s first season but have gone 8-5 the last two seasons and sit at 5-3 this year. Campbell has proven that he can take over a Power Five program in turmoil and turn it into a winner. Campbell also doesn’t have ties to the state of Florida and has never coached outside the Midwest. Minnesota coach PJ Fleck Coaching Record: 50-35 Salary: $3.6 million Fleck, 38, is the youngest coach on the hot board. He’s been a head coach for seven seasons at Western Michigan (2013-16) and Minnesota (2017-pres.). He took over a Western Michigan program that was 4-8 the year before he took over. He went 1-11 his first season then went 8-5 the next two seasons. His last season the Broncos finished 13-1 with the only loss coming to Wisconsin in the Cotton Bowl. He took over a Minnesota program and went 5-7 his first year and 7-6 in 2018. The Gophers are 8-0 and ranked 13th in the country in 2019. Fleck hasn’t coached at the college level in the state of Florida but did spend the 2012 season as the wide receivers coach for the Tampa Bay Buccaneers. He has also recruited Georgia and Florida well with six of his 23 commitments for the 2020 class coming from those two states. He had five commits from those two states in the 2019 class. Kentucky coach Mark Stoops Coaching record: 40-43 Salary: $4.75 million Stoops’, 59, name has been thrown around a lot as a potential replacement for Taggart because of his ties to the FSU program. He was the defensive coordinator for the Seminoles from 2010-12. He turned around a Kentucky program that was in dire straights before he arrived and has a 28-19 record over the last four years. The Wildcats went 10-3 in 2018, but are 4-4 this season while dealing with a number of injuries. His ties to the state of Florida are significant with stints at South Florida and Miami as a defensive backs coach early in his career on top of his time at FSU. Clemson defensive coordinator Brent Venables Coaching record: NA Salary: $2.2 million Venables, 48, is the only coordinator on the list, but he’s one of the most highly regarded defensive coordinators in the game. Venables has coached the Clemson defense since 2012 and has turned the Tigers’ defense into one of the best defenses in college football. He’s considered an ace recruiter for Clemson and has produced a number of NFL draft picks, including three first round defensive linemen in the 2019 NFL draft. If FSU doesn’t elect to go with an established coach, Venables will likely be at the top of the list, though there is no guarantee that he would be interested in becoming a head coach. He’s the second-highest paid assistant coach in college football. He has never coached in the state of Florida, but has recruited the state very well for the Tigers. Memphis coach Mike Norvell Clemson offensive coordinator Jeff Scott Reach Wayne McGahee III at wmcgahee@tallahassee.com.