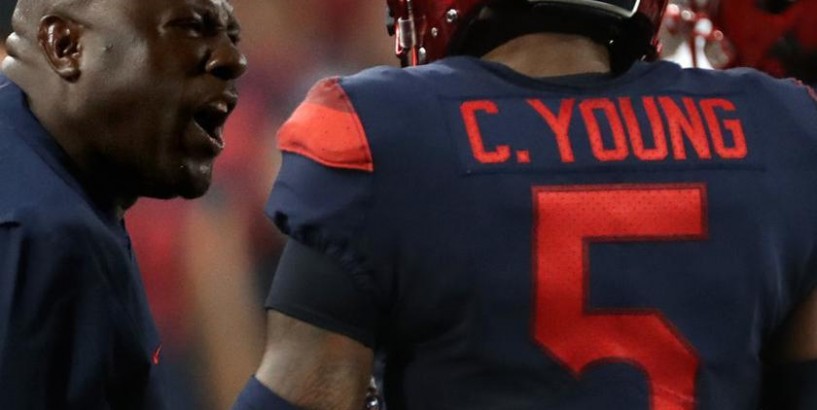 If they defended their opponents as fervently as they defend their coordinator, the Arizona Wildcats might not be in this predicament.

As such, Yates has become the fall guy for UA fans on Twitter and internet message boards. Many — at least a vocal minority — insist he should be fired. Some in the media have said the same.

Yates’ players don’t see it that way. They’re loyal to their coach. They believe in him.

Three veterans who have played their entire college careers under Yates stood up for him Tuesday.

“I just know that we got Coach Yates’ back,” redshirt junior cornerback Lorenzo Burns said, “and he’s got ours.”

“I just tune it out,” senior safety Tristan Cooper said. “He tunes it out. At the end of the day, he’s my coach and I’m his player.”

“No one wants to see (a) man get fired,” junior linebacker Tony Fields II said. “The media doesn’t really know what’s going on. You guys don’t know our playbook. The media doesn’t know what we’re supposed to be doing. That’s why I feel like sometimes Coach Yates takes a fall for a lot of things that he can’t really control.”

Fields said the fault ought to lie with the players. The counter to that: It should be up to the coaches — who, unlike the players, are paid professionals — to put them in the best positions to succeed.

The reality is, it’s probably a bit of both. The bottom line is, the defense hasn’t performed up to the standard it set for itself.

Entering Saturday’s critical contest against Texas Tech, Arizona ranks 123rd or worse nationally in pass defense, total defense and points allowed. The Red Raiders — who have struggled for years defensively — rank in the top nine in all three categories.

Context must be considered, of course. Texas Tech opened against FCS Montana State before hosting UTEP, which has won two games over the past two-plus seasons.

Neither team is on the same level as Hawaii, which the UA had to face in Honolulu. Arizona then hosted its own FCS foe, NAU. The second half of that game rekindled the fans’ rancor toward Yates.

After a solid first half in which they allowed 13 points, the Wildcats surrendered 28 after intermission. NAU’s 41 total points marked the fourth straight time a UA opponent has topped 40, dating to last season.

“I know what people see at the end of day – 41 points to NAU,” Burns said. “But there’s a lot more that goes into it. We have to get better, of course. Each week, we have to get better. We just got a little complacent. That’s an easy fix.”

Cooper said the Wildcats let human nature get the best of them at halftime, when Arizona held a 51-13 lead. He said players — including himself — felt the game was “over with” and lost their focus.

“People were just like, ‘We’re already winning, we’re gonna win.’ That was a bad mindset to have,” Cooper said. “NAU came back and took advantage of it.

Although they had yet to break into the upper tier of the Pac-12, or even the middle class, the Wildcats were trending upward defensively through Yates’ first three seasons. Arizona yielded almost 40 fewer yards per game last season than in 2017. Their points allowed and opponents’ third-down percentage declined for the second straight year.

Arizona appeared to take a step backward against Hawaii. Although they performed better against NAU, the Wildcats couldn’t silence Yates’ critics.

“There’s a lot of fans out there who really care about the U of A and are very passionate, so they tend to speak their mind a lot,” Burns said. “I just tell everybody (to) stay focused. Don’t worry about everybody else; just worry about the person next to you and yourself.

“That’s the only way we’re going to get better. Because at the end of the day, we’re on the field.”

Penalty or passion? UA coach Kevin Sumlin made it clear after the NAU game that he wouldn’t tolerate any “selfish” penalties. He was referring, implicitly, to sophomore safety Christian Young’s pair of unsportsmanlike-conduct fouls for celebrating.

Sumlin’s players understand what they can and cannot do at the end of a play. But Cooper, for one, believes the NCAA is legislating the emotion out of the sport.

“You start taking away the passion for this game by throwing every single flag,” Cooper said. “We’re not taunting.”

More from this section Alex Erickson — Bengals +3 Arizona Wildcats rewind: Five takeaways from the UA’s 65-41 victory over NAU Dare Ogunbowale — Buccaneers Young’s first infraction came after Cooper made a third-down stop. Young went to a knee on the field of play and mimed shooting an arrow at Cooper.

The second penalty came after Young broke up a pass. He raised his arms to acknowledge the crowd but happened to do so near the NAU bench.

“I could understand why they did that one, because it was on their side,” Cooper said. “I don’t think he meant to do it. He said he saw nothing but red.”

Burns liked the spirit with which the defense played. The players just need to channel it in a positive direction.

“We were out there having fun,” Burns said. “the most important thing to me is that we were celebrating each other’s victories on the field.”

Extra points Cooper is from El Paso, which is about 350 miles southwest of Lubbock. He was a big fan of former Red Raiders receiver

Michael Crabtree . “I used to like Texas Tech,” Cooper said. “This week is a little different.” Both Sumlin and Texas Tech coach Matt Wells have implied that Saturday’s game could be a shootout. Fields doesn’t like the sound of that. “I want to go out there and shut those boys out,” Fields said. “That’s a slap in my face right there. I want it to be a defensive game, on our end at least. I want our offense to score as much as they can.” Texas Tech defensive coordinator Keith Patterson , who coached at Arizona State from 2014-17, had high praise for UA quarterback

per the Lubbock Avalanche-Journal . “He just has a knack, almost like a sixth sense. He can feel when the pressure’s closing in on him, and he does a nice job eluding (it).”

This article originally ran on tucson.com .