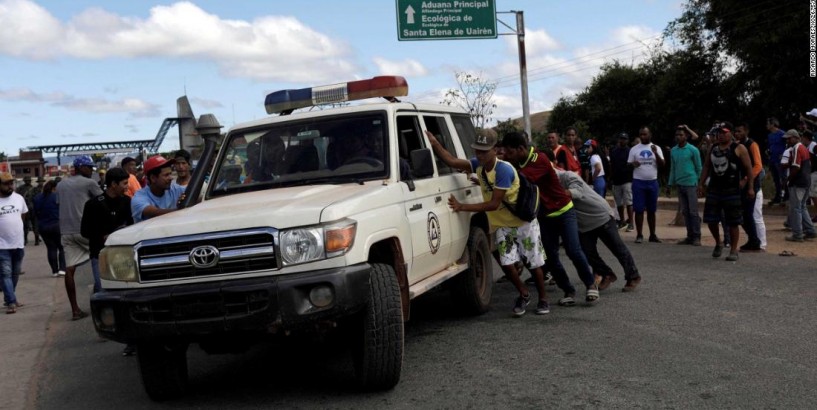 Caracas (CNN) At least two people have died and 17 were injured Friday in a standoff between a local indigenous community and the Venezuelan military over deliveries of humanitarian aid, according to local authorities.

"Instead of mediating, the military started shooting," Emilio Gonzalez, mayor of the Venezuelan town Gran Sabana, told CNN. The conflict took place near the Brazil-Venezuela border. Gonzalez said one victim was a 34-year-old woman, who was part of an indigenous group trying to facilitate the passage of aid into Venezuela, one day after President Nicolas Maduro shuttered the country's border with Brazil. National Assembly member Americo De Grazia said on his official Twitter feed that a second person, an indigenous man, had also died. CNN could not immediately confirm the deaths. An ambulance carries people injured in clashes Friday in southern Venezuela near the Brazilian border. Tensions are running high at Venezuela's borders amid opposition plans to usher aid into the country this weekend in defiance of Maduro's wishes. Read More Venezuelan opposition leader Juan Guaido, who invoked a constitutional provision last month to declare himself acting president, has been working with a raft of global partners to bring Venezuelans desperately needed food and medical supplies. The violence came as dueling concerts kicked off on the country's western border with Colombia, where aid deliveries from the United States have been languishing since Maduro blocked the Tienditas Bridge . British billionaire Richard Branson sponsored a Live Aid-inspired show Friday in Cucuta, Colombia, featuring Latin American stars such as Colombian musical legends Carlos Vives and Juanes and reggaeton singer Maluma. Colombian President Ivan Duque, Chile's Sebastian Piñera and Mario Abdo of Paraguay also joined the crowds. People await the start of Friday's concert organized by Richard Branson in Cucuta, Colombia. "I would like to send a message to Maduro," Piñera said. "There is nothing crueller than a government that denies and closes the entry of humanitarian aid that his own people need so much. And I can't stop wondering, how can a person be so greedy to be willing to cause so much pain and so much suffering to his own people for so long, only to hold on to a power that does not belong to him." Maduro staged a rival concert a few hundred meters away on the Venezuelan side of the bridge in Tachira. The beleaguered President, who is facing growing calls to step down, denies that a humanitarian crisis exists in his country and suggests that aid efforts are part of a US plot to orchestrate a coup. Maduro announced in a televised speech Thursday that he was considering shutting the Colombia border, which would seal off most of Venezuela's inland periphery, and warned against trying to bring humanitarian supplies into the country by force. The Venezuelan government has also closed its maritime border with Aruba, Curacao and Bonaire and, in the western state of Falcon, stopped flights to and from those islands. Brazilian soldiers organize sacks of powdered milk Friday in Boa Vista in humanitarian aid for Venezuela. Tweeting about the deadly clashes Friday afternoon in Gran Sabana, Guaido said: "This will not go unpunished. "Decide which side you are in at this final hour. To all the military: between today and tomorrow you will define how you want to be remembered. We already know that they are with the people, you have made it very clear to us. Tomorrow you can prove it," Guaido added. Venezuelan lawmaker Americo de Grazia tweeted a video of those injured at a hospital in Boa Vista, Brazil, and said there was a heavy military presence in the area, including several tanks. UN Secretary-General Antonio Guterres has urged that violence be avoided in Venezuela, according to his spokesman, Stephane Dujarric. "We will obviously keep a very close eye on what happens tomorrow," Dujarric said.