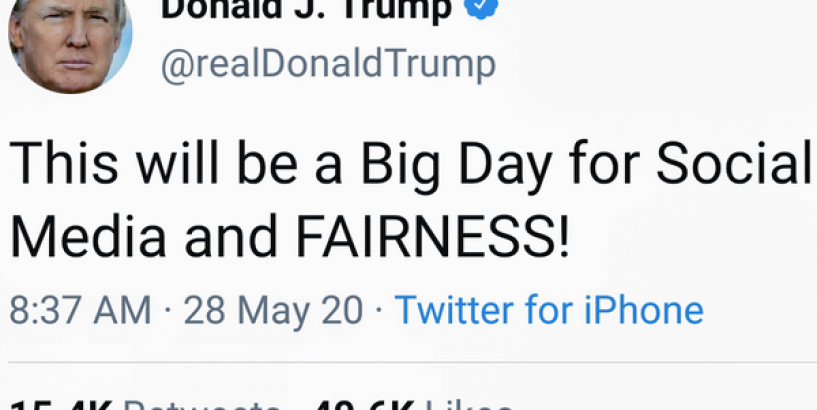 President Trump, incensed that Twitter alerted users to dubious claims in two of his tweets, has followed through on a longstanding threat to issue an executive order targeting social media platforms.

Among other provisions, the order would require the Commerce Department to petition FCC for regulations tying web companies' protections from lawsuits for users' speech to the platforms' content moderation policies.

Without that protection, Twitter could be sued for libel if, for instance, a user falsely accuses another person of a crime.

In addition to the provision immunizing sites like Twitter from lawsuits based on users' activity, Section 230 also has a “Good Samaritan” clause that protects websites from liability for removing “offensive” posts, provided the sites act in good faith.

Trump's executive order directs Commerce Department to seek FCC regulations that could limit tech companies' ability to claim the protections of Section 230's Good Samaritan provisions in certain situations -- including when platforms fail to provide a "reasoned explanation" for their decisions to restrict material.

This directive would certainly face a court challenge. Already, policy experts and some government officials are lining up to explain why that portion of the order violates the First Amendment.

“Social media can be frustrating. But an Executive Order that would turn the FCC into the President's speech police is not the answer,” FCC Commissioner Jessica Rosenworcel tweeted Thursday. “It's time for those in Washington to speak up for the First Amendment. History won't be kind to silence.”

What's more, the Communications Decency Act doesn't empower the FCC to craft regulations. In fact, the FCC itself has acknowledged it doesn't regulate website operators.

For that reason alone, broad portions of the order may well be doomed, according to Jeremy Goldman, a partner with the law firm Frankfurt Kurnit Klein & Selz.

“An executive order can't overrule a statute of Congress,” Goldman tells MediaPost. “There is no mechanism in the statute for any enforcement action by the FCC.”

Jameel Jaffer, executive director at the Knight First Amendment Institute at Columbia University, states that the order was “born unconstitutional because it was issued in retaliation for Twitter’s fact-checking of President Trump’s tweets.”

Free Press senior policy counsel Gaurav Laroia characterizes the order as “a naked attempt by the president to bully into silence Twitter, other social-media sites and anyone who attempts to correct or criticize Trump.”

He adds in a statement: “Trump’s threat to use the executive branch’s power to punish internet companies for Twitter’s mild fact check of his statements is exactly the kind of abuse of power that the Constitution and our First Amendment were written to prevent.”

But even if that portion of the order were to survive a court challenge, it may not accomplish what Trump thinks: Twitter and other tech companies don't need to rely on the “Good Samaritan” provision to remove content.

Instead, as judge after judge has found, web platforms have the same First Amendment right to remove -- or publish -- as newspapers, magazines and other traditional media.

Another provision of the executive order directs the FTC to “consider” taking action if websites “restrict speech in ways that do not align with those entities’ public representations about those practices.”

That portion, too, is problematic, Goldman says.

“The FTC does not generally go into the world of expressive speech,” he says, adding that the agency is primarily concerned with commercial speech.

In fact, as libertarian think tank TechFreedom noted Thursday, the FTC previously rejected a complaint against Fox News by advocacy group MoveOn.org, which asked the agency to investigate whether the company was duping the public with the slogan “fair and balanced.”

“The FTC won’t -- can’t -- sue Internet media for the same reason it hasn’t sued Fox News for claiming to be 'Fair & Balanced,'” TechFreedom tweeted , along with a screenshot of former FTC Chair Timothy Muris's statement about the matter.

“I am not aware of any instance in which the Federal Trade Commission has investigated the slogan of a news organization,” Muris stated on July 19, 2004. “There is no way to evaluate this petition without evaluating the content of the news at issue. That is a task the First Amendment leaves to the American people, not a government agency.”