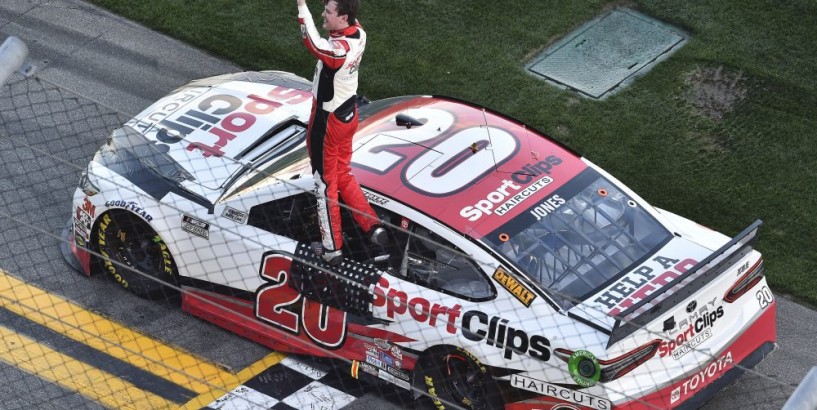 PLANO, Texas (February 10, 2020) – Camry drivers kicked off the NASCAR season with two victories at Daytona International Speedway while Doug Kalitta made history with his third consecutive NHRA Winternationals Top Fuel win in Pomona to open the season. A triumph in USAC in Ocala, Florida, closed out a winning weekend for Toyota.

Erik Jones was victorious in the Clash at Daytona International Speedway on Sunday afternoon. Jones teammate Denny Hamlin helped push his Toyota Camry to victory on the final restart in overtime and Hamlin went on to finish sixth after leading 12 laps in the non-points exhibition race. Martin Truex Jr. (16th) and Kyle Busch (18th) also competed on Sunday, however, both were involved in incidents on the 2.5-mile superspeedway that ended their race early.

“I have to thank Denny (Hamlin),” said Jones, following the race. “He pushed us really good there in the end. He got us the lead and got us up front. It was wild. We got in a few wrecks and tore the car up pretty bad. I didn’t know how rough it was. I knew it was still holding water and oil, so we were in okay shape. The SportClips Camry took the win, so it feels good. What a way to start the year – in victory lane. I hope we can keep it going from there and keep adding them up.”

Doug Kalitta opened the 2020 season by winning the Lucas Oil NHRA Winternationals, one of the sport’s most prestigious races, for the third consecutive year. The win is his fourth in the last five events at Auto Club Raceway at Pomona and moves him into the Top Fuel point lead. Overall, Toyota Top Fuel drivers have now won 15 of the last 21 races at the storied track.

“It’s hard to believe,” said Kalitta on winning his third straight Winternationals crown. “I love this place and it will probably sink in tomorrow. Anytime you can win here it’s just extra special. It’s great to start and end the season here. It’s going to be a tough year, but I’m really looking forward to it. My guys are all hungry and I’m just glad we were able to get one of the Kalitta Motorsports cars into the Winner’s Circle today and get the season kicked off right. Winning the first race takes a lot of pressure off. Now that we’ve got that win behind us, we can just try to build on it.”

Alexis DeJoria drove her Toyota Camry to the Funny Car semifinals in her first race since coming out of retirement after a two-year hiatus. It also marked the first race for the new DC Motorsports team.

Michael Self opened the ARCA Menards Series season with his second consecutive win at Daytona on Saturday. Self started from the pole and led 61 (of 80) laps to give Venturini Motorsports its third straight Daytona victory. Camry drivers Drew Dollar (third) and Riley Herbst (seventh) also earned top-10 results in the ARCA season-opener.

Racing action continues in Florida this week, with the ARCA Menards Series East opening its season tonight at New Smyrna Speedway and NASCAR is back on track at Daytona International Speedway with races beginning on Thursday evening. The Cup Series resumes on Thursday, February 13 with The Duels qualifying races where Toyota drivers will compete for their starting positions for Sunday’s Daytona 500. Coverage of both qualifying races begins at 7 p.m. ET on FS1.