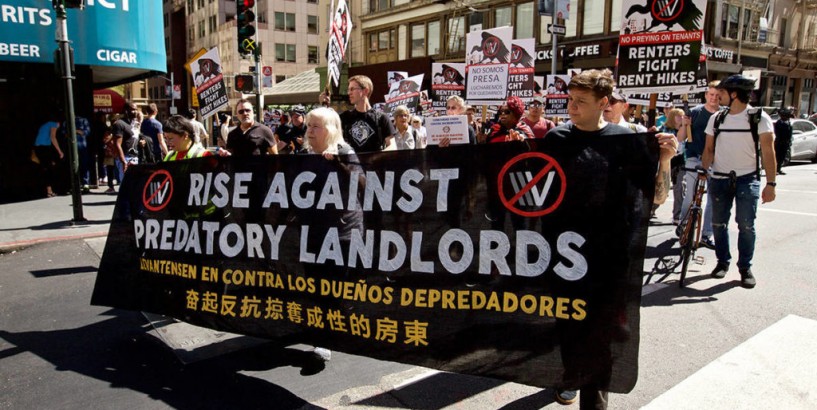 Among the legislation to be delayed by coronavirus this month is a potential state law that would allow tenants to go on strike and enforces their right to organize amid tension with corporate landlords.

Tenant organizers are looking to Senate Bill 1404, to be introduced by Sen. Maria Elena Durazo and sponsored by Tenants Together, to codify rights around tenant associations and organizing. This includes penalties for retaliation and the right to withold rent, which would be put in escrow after landlords and tenants fail to come to an agreement on an issue like habitability and rent increases.

“Right now with this humanitarian crisis, we want to strengthen the protections,” Durazo said. “If you have the right to organize but you don’t have anything that protects you against retaliation, there’s still that imbalance of power.”

Tensions around tenants’ right to organize have increased in San Francisco since Veritas, known as the city’s largest landlord, put 76 buildings up for sale in December. Tenant organizers have reported more confrontations with building managers, who argue that California Civil Code 1942.6 doesn’t allow them to knock on the doors of all other residents after being let inside by one to discuss tenant issues.

The organizers have been approaching other Veritas tenants to inform them of what’s going on, and to form a large tenant association to negotiate terms of the sale. Tenants like Eric Brooks, a 26-year tenant of a building now up for sale by Veritas, don’t want another corporate landlord that they feel has systematically displaced low-income, rent-controlled tenants.

While volunteering for the Housing Rights Committee of San Francisco, Brooks said he knocked on the door of a building manager, who handed him a postcard that said he must leave after visiting the resident who invited them in under the civil code, and that he could not go door-to-door. The manager then followed him around, making it difficult to engage with other tenants, he said.

“They were really stomping on our rights of free speech and assembly,” Brooks said. “It’s like a David versus Goliath type of battle here. Goliath is hammering down on David and we need the government to step in.”

Preventing door-knocking for all tenants is a matter of privacy and the solution to differing interpretations is for organizers “to abide by the law,” said Veritas spokesperson Juliana Bunim said.

“In some circumstances, activists have been monitored because they’re not abiding by the civil code’s provisions,” Bunim said. “When a person is invited in by a single person, they are the guest of that person. When that individual then goes door-to-door they’ve progressed from being guests to trespassers.”

“There isn’t any clear enforcement mechanism at the state or local level that will help tenants enforce these rights,” Arreola said. SB 1404 “basically forces the owner to continue to engage with the tenants to help resolve the issues, otherwise tenants can withhold rent for 30 days.”

SB 1404 would expand enforcement of AB 1482 to local jurisdictions, which would involve the city attorney, district attorney or county counsel. But Durazo’s intention with the right to a rent strike would bring landlords to the negotiating table so it may be worked out before falling to the government.

At the moment, door-knocking has been put on hold while The City hunkers down to prevent coronavirus from spreading. But organizers have had plenty to keep them busy and are working to prevent others from losing their homes during or immediately after the shelter in place order ends April 7, when many people will likely struggle to make rent.

“We’ve shifted to a really deep phone outreach in order to talk to people,” said Brad Hirn, lead community organizer for HRC. “We just wanted to see something much stronger on a statewide level.”

Tenant advocates have called for a blanket moratorium on rent and mortgage payments, and for Veritas to stop collecting rent during the pandemic. Last week, Veritas said it would voluntarily suspend evictions for residents financially impacted by the health crisis.

The California Legislature’s recess through April 13 during the COVID-19 crisis has caused delays with the legislative counsel, which is needed to draft language before it can be introduced. Durazo introduced a similar bill in 2019, Senate Bill 529, but it failed by one vote.

But the timing to protect tenants couldn’t be more critical, Arreola said.

“People being forced out right now in order for a corporate landlord to meet their bottom line, it’s not just morally wrong” Arreola said, “but it’s actually going to exacerbate our current public health crisis. It’s important tenants have the tools to help defend their rights to be in their homes without the risk of being pushed out.”