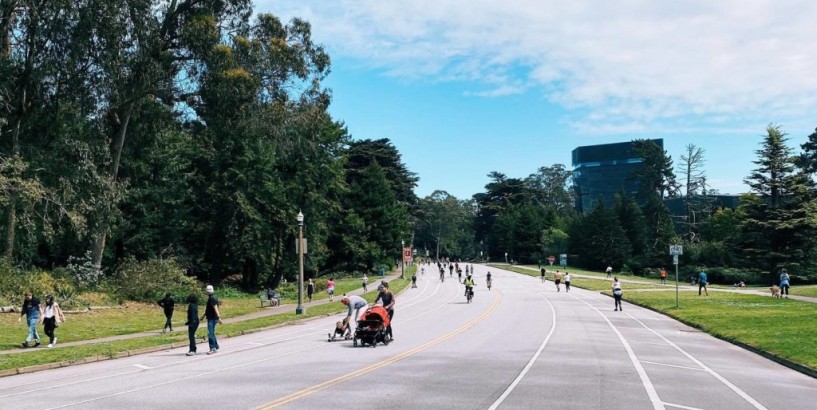 Walking is still considered an essential activity, exempt during California’s once-in-a-generation lockdown to prevent the novel coronavirus from further spreading.

Precautions must still be made to stay at least six feet away from other people not in your household. But how do you socially distance on confined sidewalks in a dense urban environment full of neighbors also yearning to stay physically and mentally healthy?

Some say the answer is to close streets to cars.

“You absolutely have to walk in the street to pass people,” said Patrick Traughber, a safe streets advocate. “Since the streets have car traffic, it’s a dangerous situation. It feels like we could convert some of the road capacity to walk while the car traffic is down.”

Traughber crowd-sourced San Francisco streets that would be ideal to close during the lockdown. Divisadero Street, Marina Boulevard, Great Highway at Ocean Beach, Valencia Street, John. F. Kennedy Drive in Golden Gate Park, and Haight Street made the list of nearly 30 roads to ban cars from during the lockdown. At least two lanes on Oak and Fell streets and Embarcadero were also requested.

So far, Rec and Park has declined to close JFK Drive, per the advice of the Department of Public Health. Health officials are concerned it would encourage gathering, Rec and Park said Saturday on Twitter . The department and San Francisco Municipal Transportation Agency were not immediately available to comment on whether they would consider other street closures.

Twitter users argued that gathering was already occuring because of the space taken up by cars that could be used by pedestrians and cyclists to spread out from the confined sidewalks and trails. The street’s usual Sunday closure showed ample social distancing, Traughber said.

“They’re only able to keep that distance because the street is closed from car-free Sundays,” Traughber said. “To me, it seemed like a much better situation.”

CNN and host Jake Tapper have taken special aim at San Francisco for not socially distancing, using photos of the usually-crowded Embarcadero and Marina. Maintaining the practice is an ongoing concern but Mayor London Breed contended that other parts of the city are empty , showing residents are taking it seriously.

Walk San Francisco, a pedestrian advocacy group, has also urged JFK Drive be closed off to cars every day during the shelter-in-place. Supervisors Matt Haney and Dean Preston have publicly expressed support for the changes.

Of course, car-free streets have also been in demand outside times of pandemic. Market Street went car-free at the end of January, clearing congestion and helping buses run fast on the thoroughfare, which spurred calls for the city to study more permanent closures.