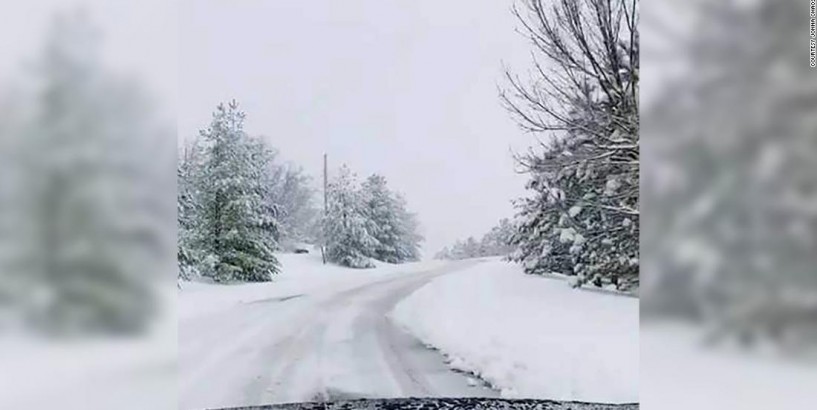 (CNN) At least four people have died and scores were injured and stranded as a snowstorm pounded St. Louis and other parts of Missouri, the Missouri State Highway Patrol said.

In a tweet Saturday morning, the patrol said it also had responded to 48 injuries, 723 crashes, 1,252 stranded motorists and 2,968 calls for service. As of 8:00 am this morning,MSHP has responded to:

PLEASE DO NOT TRAVEL. I-44 in St. Louis still being hit particularly hard. Road conditions at https://t.co/ZDpgnCCZGC pic.twitter.com/zzTzvVms8M

— MSHP General HQ (@MSHPTrooperGHQ) January 12, 2019 St. Louis had recorded 10.4 inches of snow by 1:30 p.m. ET, with higher accumulations in other parts of Missouri. A foot was recorded in Columbia and 17 inches in Harrisburg as of 10 a.m. ET. The storm is headed east, where it's expected to blanket Washington and Baltimore, forecasters said. Four to 6 inches are predicted for Washington and 2 to 3 inches for Baltimore, they said. Ryan Hill of Lee's Summit, Missouri, shovels the Kansas City Chiefs' logo out of snow on his driveway. "We have a strong snowstorm that's stretching 1,400 miles from Kansas to the East Coast," CNN meteorologist Haley Brink said. "St. Louis is seeing its worse snowstorm in five years. We're going to see a significant snow event for the mid-Atlantic to start the year for 2019." Read More More than 65 million people are under a winter storm advisory, watch or warning. More maps and forecast models Snow accumulation is forecast through Sunday from St. Louis to Washington. St. Louis blues St. Louis could get as much as a foot of snow by late Saturday, the National Weather Service said. It would be the most snow a single storm has dumped on the city since 2014 when a January blizzard left 10.8 inches. If St. Louis gets 15 inches or more of snow -- there's about a 10% chance -- it would be the city's second-greatest snowstorm of all time. Many areas across eastern Kansas and western Missouri saw their highest snow totals in several years last night. pic.twitter.com/mRtwqx4cUl

— NWS Kansas City (@NWSKansasCity) January 12, 2019 In Kansas City, Missouri, "we are up to 7.2 inches of snow so far with this storm," the local National Weather Service office said at 7 a.m. ET. The snow is due to taper off by 4:35 p.m. ET when the Kansas City Chiefs host the Indianapolis Colts in an NFL playoff game , Brink said. "So, by that time, most of the snow will have already fallen, but there will still be flurries through the beginning of the game," she said. I-44 westbound past 141 still crawling at 9am. Here's why: pic.twitter.com/Sidngtbj5s

— Mark Griffin (@mgriffin_kmov) January 12, 2019 The Missouri Department of Transportation warned residents not to travel in the storm if it wasn't necessary. The department reported incidents and stalls on interstates overnight. But it cited progress Saturday morning as crews worked to clear routes and bring "water and food to stranded motorists." At St. Louis Lambert International Airport, "a winter storm has forced dozens of cancellations across all airlines at STL. More cancellations are likely on Saturday and Sunday," airport officials said. The University of Missouri men's basketball game at the University of South Carolina was also canceled Saturday because of weather-related travel problems, the team tweeted. As #WinterStormGia continues to make its way through #STL , airlines have cancelled some arrivals and departures at the #stlairport . Check flight status with your airline before coming to the airport. #flystl Updates at: https://t.co/ZmJHxvXtzX

— STL Airport (@flystl) January 12, 2019 Washington and Baltimore in storm's path Along with Washington and Baltimore, Philadelphia is predicted to get 1 to 2 inches of snow, and there is a possibility of light accumulation in New York along the storm's northern edge. JUST WATCHED Sleet or freezing rain? See the difference Replay More Videos ... MUST WATCH

Sleet or freezing rain? See the difference 01:11 The Appalachians will pick up ice and snow in the mountains of Virginia and North Carolina, forecasters said. A half inch of ice and 3 to 5 inches of snow are predicted. There is a small chance the southern Appalachians will get enough freezing rain and sleet to turn into an ice event Saturday into Sunday. More heavy rain also will fall on the already-saturated South. The Southeast has seen abundant precipitation in December and January, and the additional rain could put a strain on already-high rivers.