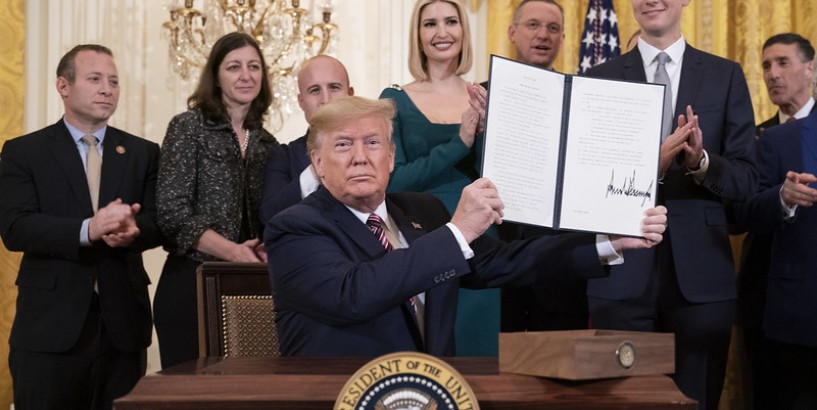 Six news themes in 2019 that reverberated throughout the Jewish world

U.S. President Donald Trump displays his signature on an Executive Order committing his administration to combating the rise of anti-Semitism during an afternoon Hanukkah reception in the East Room of the White House on Dec. 11, 2019. Picture from White House, by Joyce N. Boghosian. From anti-Semitic attacks to BDS and negative rhetoric in Congress, it hasn’t been the most positive year for the Jewish community, even though U.S. President Donald Trump has clearly exhibited his staunch support for Israel. By Jackson Richman,JNS The year 2019 consisted of ups and downs for the Jewish and pro-Israel community. Below is a listing of the top six events or themes that shaped news coverage throughout the year (in no particular order).

Anti-Semitic attacks From Southern California to Jersey City, Jews were under attack as, in the former, one woman was killed and three people injured during Shabbat-morning services at Chabad of Poway on the last day of Passover on April 27. In the latter, two Chassidic Jews, a store employee and a police officer were shot and killed at JC Kosher Supermarket in the Greenville neighborhood of Jersey City on Dec. 10.

In Brooklyn, N.Y., Orthodox Jews have been consistently targeted , from eggs thrown at them to being robbed to their institutions vandalized to being physically assaulted .

On Dec. 28, a man carried a long machete entered a home and prayer hall known as Rabbi Rottenberg’s Shul in Monsey, N.Y. , slashing and injuring five of the celebrants gathered at a Hanukkah candle-lighting party.

Jews were the most targeted for hate crimes among religious groups in 2018, according to an FBI report released in November.

Trump adds to pro-Israel résumé Despite criticism over the United States withdrawing its forces from northeastern Syria (which has since been slightly walked back) in October, the Trump administration added to its pro-Israel agenda by recognizing Israel’s sovereignty over the Golan Heights in March, designating Iran’s Islamic Revolutionary Guard Corps as a terrorist group and announcing that the United States would no longer view Jewish settlements in Judea and Samaria as illegal under international law.

Additionally, the administration continued to maintain “maximum pressure” on the Iranian regime since withdrawing in May 2018 from the 2015 nuclear deal, despite not militarily responding to Iran shooting down a U.S. drone over the Strait of Hormuz in June and attacking two Saudi Aramco facilities in September. Washington’s campaign has included sanctions on individuals, including Ayatollah Ali Khamenei and Foreign Minister Mohammad Javad Zarif , and entities tied to Tehran and its proxies, especially the terrorist group Hezbollah.

In December, U.S. President Donald Trump signed an executive order that requires the U.S. government to consider the International Holocaust Remembrance Alliance definition of anti-Semitism in responding to “prohibited forms of discrimination rooted in anti-Semitism as vigorously as against all other forms of discrimination prohibited by Title VI” of the 1964 Civil Rights Act. It mandates that the U.S. Department of Education investigate anti-Semitic incidents on college campuses in accordance with Title VI of that law.

Eroding support for Israel in Democratic circles It was a mixed year for support for Israel among Democrats. While a record number of pro-Israel Democrats visited the Jewish state in August, the rise of several prominent far-left anti-Israel members of the party took the lion’s share of attention. Reps. Ilhan Omar (D-Minn.) and Rashida Tlaib (D-Mich.), who had been repeatedly accused of anti-Israel and anti-Semitic rhetoric and behavior, drew headlines after the two were banned from visiting the Jewish state over their support for the BDS movement.

On the campaign trail, some Democrats have made remarks and advocated policies critical of Israel, while Sen. Bernie Sanders (I-Vt.), Elizabeth Warren (D-Mass.) and South Bend, Ind., Mayor Pete Buttigieg have been reported to have anti-Israel campaign staff members. The anti-Israel group IfNotNow has approached Democratic candidates as representatives of the Jewish community and asking them about ending the so-called “occupation” of the West Bank. Warren and Buttigieg responded favorably to IfNotNow’s plea. Sanders has repeatedly attacked the government of Israeli Prime Minister Benjamin Netanyahu as “racist,” even referring the term to Netanyahu himself.

Anti-Semitic and anti-Israel sentiment rising on college campuses On college campuses, far-left BDS activists have loudly vocalized anti-Israel sentiment and made pro-Israel and Jewish students feel ostracized. Pitzer College’s College Council voted in March to suspend the school’s study-abroad program at the University of Haifa (however, the school’s president said he would not implement the recommendation). Meanwhile, Apartheid Week programs and pro-BDS conferences have continued to take place unabated, while outright hostility has been exhibited on campuses , including at New York University, which gave an award to the Students for Justice in Palestine chapter (NYU’s president stated he didn’t support the move).

The number of Israel-related, anti-Semitic incidents against Jewish students on campuses increased 70 percent from 2017 to 2018, according to a report published in September by the AMCHA Initiative.

The report documented how academic BDS-compliant behavior was linked to 86 percent of Israel-related acts of anti-Semitic harassment of students. Overall, academic BDS activity more than doubled from 2017 to 2018, while promotion or implementation of academic BDS increased by more than 100 percent in the same time frame.

The BDS movement was also exposed for links to Palestinian terror groups as well as how it is fueling anti-Semitic attacks on campus and elsewhere.

Incumbent premier Boris Johnson and the Conservative Party won 365 seats in the 650-seat House of Commons— their biggest victory since 1987, while Labour won 203 seats.

As the results came in, Corbyn announced that he would not lead Labour in the next election.

“Not for the first time, our nation has stood firm against anti-Semitism,” said Gideon Falter, chief executive of Campaign Against Antisemitism, in a statement. “The British public has watched the once proudly anti-racist Labour Party become infested with Jew-hatred, and it has resoundingly decided to stand with its Jewish community and give the anti-Semites a crushing rebuke. The faith that British Jews showed in our country has been vindicated.”

Israel goes to elections twice (and is heading for a third round in 2020) Israeli voters went to the polls an unprecedented two times in 2019, each result causing no 61-seat coalition to be formed in the Knesset.

Once again, Israelis are headed to the polls on March 2, with Prime Minister Benjamin Netanyahu, who became Israel’s longest-serving prime minister in July, under indictment charges.