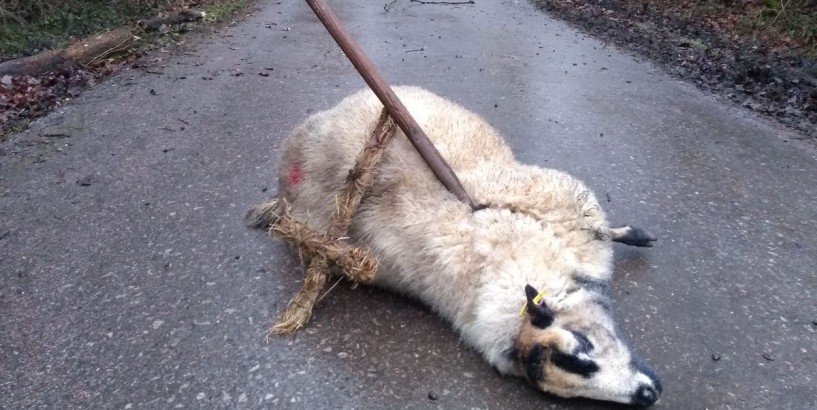 News Sheep found stabbed to death with inscribed pitchfork and Satanic cross made out of hay WARNING GRAPHIC IMAGES: The death follows a series of grisly livestock killings which have been attributed to a Satanic-style-cult operating in and around Hampshire's New Forest Share Police are investigating the incident after it was left with the peculiar cross made of hay (Image: Solent News & Photo Agency) Sign up to FREE daily email alerts from Mirror - daily news Subscribe We will use your email address only for sending you newsletters. Please see our Privacy Notice for details of your data protection rights Thank you for subscribing We have more newsletters Show me See our privacy notice Invalid Email

Horrified neighbours have spoken out after a sheep was found stabbed to death and dumped in a national park next to a cross made of hay.

The death is the latest in a series of brutal livestock killings which have been linked to a Satanic-style-cult.

The ewe was discovered next to a broken pitchfork in Cadnam, a village in Hampshire's New Forest on January 2.

An examination of the animal showed its body covered in puncture wounds. It appeared to have been stabbed eight times - possibly with a long blade.

Police are investigating the incident, which comes just months after two sheep and three cattle were found stabbed to death.

Shocking photographs showed the slaughtered sheep covered with pentagrams. Its owners say they are horrified by the killing (Image: Solent News & Photo Agency) Read More Hero dogs save owner by pouncing on crazed gunman who had stormed house

The number '666' which is in Christianity believed to be a sign of the devil was inscribed on Bramshaw's St Peter's Church at around the same time.

Wendy Maughan, who owned the sheep in the latest incident said she was "extremely saddened" by the incident and believes the killings are being carried out by two or more people working together, who may have stunning equipment.

She told the Southern Daily Echo : "I'm extremely saddened that we seem to live in a society where someone gets pleasure by attacking and stabbing to death innocent, non-aggressive animals." The sheep was found dead with a pitchfork and cross left beside it (Image: Solent News & Photo Agency) Read More Great white shark 'kicked in the face by gang of men after becoming beached'

Neighbour Andrew Parry-Norton also told the local newspaper: "A broken pitchfork had been placed on the sheep's body, along with a cross made of hay and straw. It gave me the creeps."

Hampshire police are investigating the death and looking at any possible links to other incidents in the area. The death is the latest in a series of mysterious and grisly livestock killings in the New Forest (Image: Solent News & Photo Agency) Read More