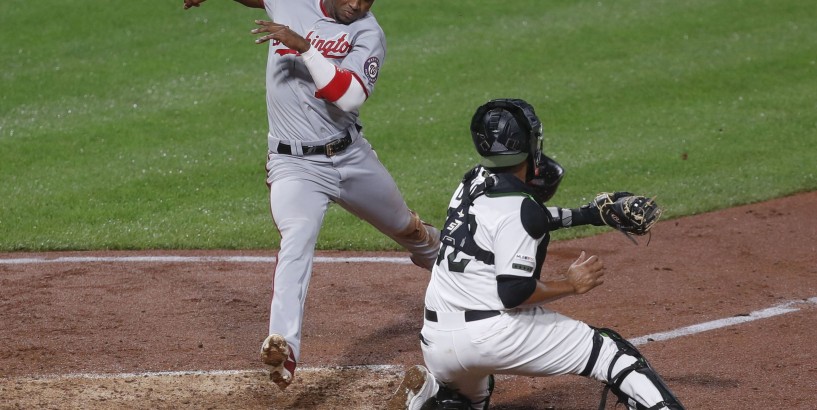 PITTSBURGH (AP) — Max Scherzer pitched four innings in his return from the injured list, giving up one run as the Washington Nationals beat the Pittsburgh Pirates 7-1 on Thursday night. Scherzer allowed four hits, struck out three and walked one. The three-time Cy Young Award winner was put on the IL on July 26 with a strain in his upper back — a day earlier, he made his first start since being on the injured list with a back issue.

The Nationals hadn't set a pitch count for Scherzer in this game, but said they would closely monitor him. He threw 71 pitches, 48 for strikes.

Anthony Rendon and Howie Kendrick homered for Washington, which leads the NL wild-card race and won for the ninth time in 11 games.

The Pirates fell to 8-30 since the All-Star break. Steven Brault (3-3) allowed two runs in six innings.

Scherzer is 7-0 in his past 11 starts. Hunter Strickland (2-1) allowed one hit in two innings for the win.

Scherzer struggled in the third, using 25 pitches and allowing Adam Frazier's seventh home run of the season on a fastball with one out. He stranded runners on first and second by striking out Colin Moran.

Kendrick singled, doubled and hit his 14th homer, a two-run drive in the eighth that made it 4-1. Rendon hit his 28th home run in the ninth.

Nationals: 2B Brian Dozier was reinstated from the paternity list. ... RHP Kyle McGowin and INF Adrián Sanchez were optioned to Double-A Harrisburg.

Nationals: RHP Aníbal Sánchez (7-6, 3.99) is looking to avoid his first loss in more than more than three months when he takes the mound against the Cubs on Friday. He is 7-0 in 15 starts since allowing three runs in 4 1/3 innings of a 5-0 loss to the Dodgers on May 10.

Pirates: RHP Mitch Keller (1-2, 8.86) will try to get past the fifth inning for the first time against Cincinnati on Friday. The 23-year-old rookie has lasted five innings or fewer in each of his first five major league starts, including when he gave up six runs in 4 1/3 innings against the Cubs on Sunday.