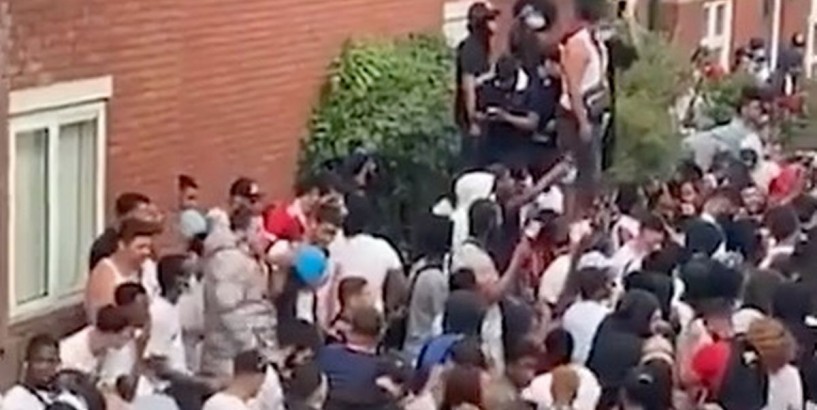 Don't miss our email newsletter with regular round-ups of the biggest headlines Sign up When you subscribe we will use the information you provide to send you these newsletters. Sometimes they’ll include recommendations for other related newsletters or services we offer. Our Privacy Notice explains more about how we use your data, and your rights. You can unsubscribe at any time. Thank you for subscribing We have more newsletters Show me See our privacy notice Invalid Email

Helicopters circle overhead as police in riot gear move in to break it up and loud music plays.

The Metropolitan Police have told Mirror Online that partygoers "refused to leave the location" after officers engaged with them upon first arriving at the illegal party.

A section 60 order has been put in place in the area until 6am tomorrow, giving police extra stop-and-search powers.

The chaotic scenes show yet another incident of heatwave disorder as people flout social distancing guidelines amid the ongoing coronavirus pandemic. Police use their shields to battle the illegal partygoers Read More Eight children die in mass drowning after jumping into river to save friend

After a week in which violence broke out at multiple illegal raves and parties during the UK heatwave, police are again tonight tasked with disrupting a gathering.

The footage shows a massive group of people partying in Harrow Road, in what the Mirror understands is the Mozart Estate in the W9 West Kilburn, west London area.

In other footage, revellers at the illegal party are squeezed together in a massive group. This screenshot shows the large gathering Read More Read More Related Articles Man inserts 15-inch eel into rear in 'folk remedy' before it tears hole in his bowels

It is understood bottles and other objects have been thrown at police.

"Officers were called to the location around 3pm following concerns from residents. Police strike out with their batons

"Officers engaged with the attendees, who refused to leave the location.

"The police helicopter is also assisting.

"Following engagement within the local community we are hopeful that crowds are dispersing.

"No arrests at this stage.

"A section 60 has been authorised in the vicinity until 6am on Saturday, June 27. A huge mass of people filled the street

"Officers will remain in the area in order to provide reassurance."

As of 11.20pm, Mirror Online understands the illegal party is still ongoing despite police requests for the revellers to disperse.

In another clip shared on Twitter from inside the group of partygoers, a line of police can be seen being pushed back from entering the area.

Bottles and other objects fly overhead and shouts of "no entry" can be heard as the scene threatens to descend into utter chaos.

In other videos posted online, it is suggested the group of illegal partygoers have moved on to another location.

This comes after violence broke out at an illegal rave in Colville Gardens, Notting Hill, in the early hours of today, just 24 hours after a similar event in Brixton.

Also yesterday a major incident was declared in Bournemouth as thousands of revellers stretched local services to the limit by descending on the seaside town. Police move in to stop the party

This is despite social distancing rules still being in place and police begging people to stay at home and not mingle with other households.

The Met Police yesterday confirmed they would be stepping up policing operations across London tonight following reports of unlicensed music events, block parties and raves set to take place.

The illegal parties come after a street party in Brixton, south London descended into chaos as police were pelted with missiles in clashes that left 22 officers injured. Police said people refused to leave An officer puts his helmet on before disorder breaks out

Footage on social media showed police vehicles being smashed up by vandals during the confrontation with a large and "very hostile" crowd near the Angel Town estate in Brixton.

Police were called to Overton Road after reports of an unlicensed music event and were attacked as they attempted to disperse the crowd.

Footage on social media showed police vehicles smashed and officers pelted with bottles during clashes with a large crowd, with Downing Street condemning the scenes as "appalling" and Home Secretary Priti Patel calling the incident "utterly vile". Battle erupts Is is yet another scene of disorder this heatwave week

Scotland Yard said in a statement on Facebook late on Thursday that its officers were undertaking an "enhanced policing operation" across the capital.

Commander Bas Javid said extra officers, clad in personal protective equipment, had been called in to ensure there was an "effective and prompt response to any reports or disorder".

He added: "Our role is to keep our communities safe and this evening people can expect to see a heightened police presence out in areas where we know these events are taking place.

"This is in direct response to concerns expressed by our communities, many of whom were scared and shocked by the events taking place outside their homes." DailyMirror