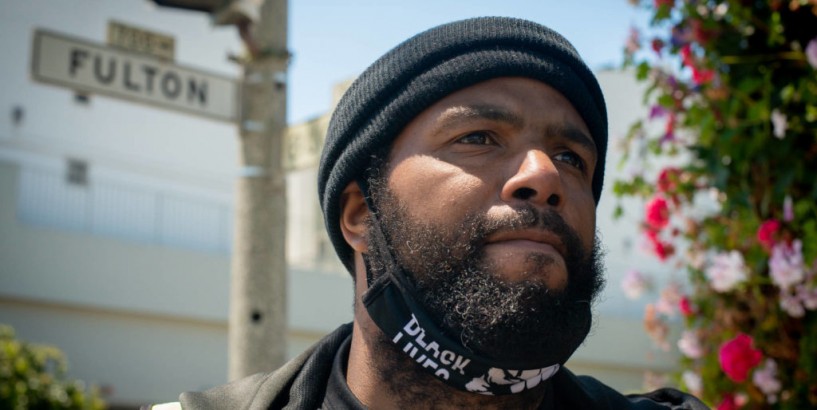 But the open space between Eddy and Grove streets descended into turf wars and gun violence during his teenage years. In 2000, when Mullins was 15, his friend was murdered there.

“From that point on, the mall took a different feel for me,” Mullins said.

But he too was involved with the ongoing squabbles in the streets of the area, Mullins acknowledged, and was sent to prison for shooting a man on Fulton Street in 2006. After he was released, Mullins co-founded Green Streets in 2010, a business offering recycling and composting services, with DeMorio Lee, a high school classmate from a rival street.

“We have friends that have murdered each other … we set out on a journey to create jobs in our own neighborhoods, neighborhoods that didn’t get along with each other,” said Mullins, 35, a resident of nearby Hayes Valley.

While the gun violence and turf wars have since tapered off, Mullins said more work still needs to be done.

“Everything is cool, calm and collected,” Mullins said. “And then at any moment, you can hear three or four gunshots randomly. It’s not an everyday occurrence … it’s better, but safety is still top of the list of concerns for the residents of this community.”

But the community is beginning to grow restless, Mullins said, as The City, its project partners and residents have been planning for the project since 2014.

City officials and local advocates are now hoping that a bond planned for the November ballot will kickstart the project. Mayor London Breed introduced a $438.5 million bond measure last month to fund services such as supportive housing, mental health and park improvements, with $2 million slated to renew Buchanan Street Mall.

“It’s long overdue to really invest in the community-led effort to make Buchanan Mall shine,” said Supervisor Dean Preston, who represents the area of that’s home to the mall.

The measure will be placed on the November ballot if the board approves the bond. If residents pass the bond, the $25 million Buchanan Street Mall project would break ground in early 2022 and the first block, between Turk and Golden Gate streets, would be completed by the end of 2022, according to Recreation and Parks spokesperson Tamara Aparton.

The project had raised more than $2.8 million by April, Aparton said, with funding from The City’s general fund, Let’sPlaySF! campaign, development impact fees and Trust for Public Land, a nonprofit organization and project partner.

Some residents were skeptical about the project, as the neighborhood already was gentrifying, according to Aparton.

“People worry that this project is going to be for future residents that move in, not for people who are already living there,” Aparton said. “We wanted to make sure that the project served the people who already lived there.”

Local residents were given input on the mall’s design, with Green Streets surveying residents and listening to their feedback.

“The community has completely shaped this project … if they got the $2 million from the bond, it would make a huge difference,” Aparton said.

A sound dome of local stories was installed in 2014 along with planters and archways honoring residents such as Alice Lane, who owned the local deli Virgo’s, and Mullins’ late grandmother Louise Harvey, who was a housing and education advocate.

“There were a lot of painful stories,” said Alejandra Chiesa, Bay Area program director of The Trust for Public Land. “The community needed healing. People have lost relatives and loved ones.”

That year, residents from the neighborhood also began re-imagining the layout of the park. Each block will feature a unique theme of outdoor recreation. For instance, the themes of basketball and barbecue will be featured from Golden Gate and McAllister streets, while active recreation will be highlighted from Eddy and Turk streets.

“The new design would give us some cohesion between all those housing complexes,” Mullins said.

“There’s a lot of history there … the residents imagined this five-block park as connective tissues that would bring all these different people from the housing projects together again,” he continued.

The project will also include green spaces, additional lighting and a memory lane highlighting stories of the neighborhood.

A plan to update the Buchanan Street Mall has been in the works since 2014. (Nicholas Chan/Special to the S.F. Examiner)

A sound dome at the Buchanan Street Mall is among improvements made in the public housing complex. (Nicholas Chan/Special to the S.F. Examiner)