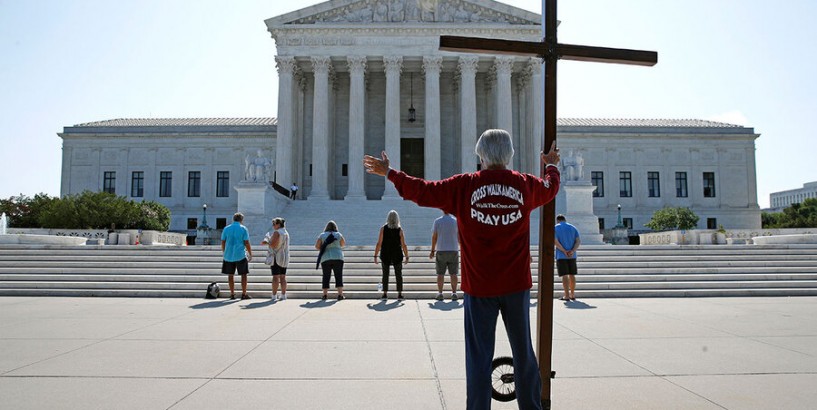 Religious liberty’s big week at the US Supreme Court - CSMonitor.com

Two ways to read the story Quick Read Deep Read ( 6 Min. ) By Harry Bruinius Staff writer Henry Gass Staff writer In three end-of-term decisions, the U.S. Supreme Court has elevated religious liberty – which was taken up in legislation in the 1990s to offer protections to Native American religions – and weighted the rights of Christians above those of women and LGBTQ Americans. The rulings come amid a rapidly changing U.S. society, where a majority of Americans believe in equal rights for LGBTQ Americans and fewer Americans identify as religious.

“Traditional religious believers certainly feel under attack,” says Professor Vincent Phillip Muñoz. “I mean, there’s been a huge cultural shift over the last handful of years, an increasing acceptance of LGBT rights, and for many traditional religious believers, they worry that their beliefs are no longer welcome, or even will no longer be tolerated.”

“Whether they’re right in worrying about that or not, only time will tell,” continues Professor Muñoz. “But certainly that’s a fear social conservatives have.”

Some liberal-leaning scholars question whether the legacies of religious bigotry are necessarily similar to those surrounding racism and white supremacy. “It’s really not exactly the same thing in a lot of ways,” says Professor Jessie Hill. “One of which, and the most obvious is, Catholics have tremendous political and cultural power right now.”

New York; and Austin, Texas Last week, in one of the Supreme Court’s major rulings about the meaning of religious freedom and the separation of church and state, Justice Samuel Alito wrote a passionate account of the ugly anti-Catholic animus that once animated the country’s education policies.

At issue in the first of three end-of-term rulings – each hailed by religious conservatives as an important victory for the cause of religious liberty, and decried by critics as allowing religious Americans to infringe on the rights of others – was the state of Montana’s no-aid provision, or so-called Blaine amendment . Such provisions, long enshrined in 37 state constitutions, restrict public funding from religious establishments and, proponents say, maintain a careful “wall of separation” between church and state.

In Espinoza v. Montana, Justice Alito described how the nation’s Blaine amendments were rooted in 19th- and 20th-century Protestant bigotry and a central part of efforts to stave off “sectarian” Catholic schools and their foreign ideas and ways of worship.

The court’s majority said the state’s no-aid provision violated the First Amendment’s free exercise clause when it excluded religious schools and families from a tax-credit scholarship program. “They are members of the community too,” the court said in the 5-4 decision in Espinoza . “Their exclusion from the scholarship program here is odious to our Constitution and cannot stand.”

Taken together, all three decisions continue the Supreme Court’s prioritization of religious liberty as it expands this protected and unique sphere in American social life. On the one hand, the decisions of the current court could be seen as chipping away at the wall of separation – an extra-textual First Amendment metaphor that often makes religious conservatives bristle.

California seemed to do everything right. So why are COVID-19 cases surging? But at the same time, the decisions this term and over the past few years have been refortifying the wall of separation, bolstering its height and thickness even as it expands religious establishments’ many exemptions from the country’s social and legal norms otherwise. As a result, the court’s left-leaning critics say, many women and LGBTQ Americans have found their own freedoms especially curtailed.

All three decisions, too, come amid a rapidly changing U.S. society in which fewer Americans identify as religious and where a majority of Americans have welcomed married same-sex couples and others into the country’s traditional norms and affirmed their equal rights – a seismic shift few thought possible even a decade ago, experts say.

As a result, “traditional religious believers certainly feel under attack,” says Vincent Phillip Muñoz, professor of religion and public life at the University of Notre Dame in Indiana. “I mean, there’s been a huge cultural shift over the last handful of years, an increasing acceptance of LGBT rights, and for many traditional religious believers, they worry that their beliefs are no longer welcome, or even will no longer be tolerated.”

“Whether they’re right in worrying about that or not, only time will tell,” continues Professor Muñoz, whose work was cited by both Chief Justice John Roberts and Justice Clarence Thomas in their opinions in Espinoza. “But certainly that’s a fear social conservatives have.”

For some liberal-leaning scholars, such fear, rooted in a sense of cultural vulnerability expressed by other minority groups, risks becoming reactionary. Like Justice Alito’s passionate account of what might be called WASP supremacy or a Protestant bigotry toward foreign religious “others,” religious conservatives have in many ways begun to see themselves as a despised and ridiculed class.

“In their eagerness to assume the mantle of oppression for Catholics and other Christians in the U.S., Justice Alito and other conservatives seem to want to join the current cultural zeitgeist, or this particular cultural moment when we are trying to figure out how to respond to centuries of oppression,” says Jessie Hill, professor at the School of Law at Case Western Reserve University in Cleveland, noting similar recent descriptions of the Tulsa race massacre of 1921.

“But it’s really not exactly the same thing in a lot of ways,” she continues. “One of which, and the most obvious is, Catholics have tremendous political and cultural power right now.”

Philadelphia Bible riots It was not always the case. In his concurring opinion Justice Alito, who, like four others on the nation’s high court, is Roman Catholic, expressed an implicit sense of grievance and vulnerability.

At the outset, the conservative justice admitted that such historical appeals are not normally part of his interpretive toolbox. In a previous case this year that recounted the ugly history of racism in the jury rules of Oregon and Louisiana, he noted he had dissented, arguing that only the texts of these laws, and not their historical contexts, should constitute the court’s primary focus.

“But I lost, and [the case] is now precedent,” he wrote. “If the original motivation for the laws mattered there, it certainly matters here.”

Including a picture of a famous cartoon from 1871 that “depicts Catholic priests as crocodiles slithering hungrily toward American children as a public school crumbles in the background,” Justice Alito described how religious bigotry not only infused the nation’s elites, but also erupted in episodes of violence and murder.

“In Massachusetts and elsewhere, Catholic students were beaten and expelled for refusing to read from the King James Bible,” Justice Alito wrote . “In New York, a mob destroyed the residence of Bishop John Hughes, who had argued that, if the State was going to fund religious public education, it should also support church schools.”

Most notorious were the Philadelphia Bible riots in 1844: “Months of scaremongering broke out into riots that left two of the city’s Catholic churches burned and several people dead,” he continued. Among the proponents of Blaine amendments, he also noted, was the Ku Klux Klan.

Changing U.S. society Even before the Supreme Court’s landmark Obergefell decision in 2015, which legalized same-sex marriage in all 50 states, the rapid pace of social change led many religious conservatives to emphasize their influence in the federal judiciary. They sought out legal pathways to opt out of the ritual aspects of same-sex weddings in the public sphere, even while seeking more room to freely exercise their deeply held religious convictions unencumbered by certain civil rights protections for sexual minorities and women.

“While these rulings will certainly disappoint those who want a stronger wall of separation between church and state, these conservative Supreme Court outcomes are exactly why evangelicals so strongly support President Trump,” says Mark Miller, director of the law and society program at Clark University in Worcester, Massachusetts. “Their top priority is getting conservative judges on the courts who will read these constitutional clauses in ways that the religious right favors.”

In the final week of the Supreme Court’s current term, such priorities have appeared to pay off. In the first of two opinions issued Wednesday, the court continued to reshape its religious freedom jurisprudence, expanding a doctrine known as the “ministerial exception” and bolstering religious institutions’ exemptions from general employment discrimination laws.

In a dissent, Justice Sonia Sotomayor, who is also Catholic, joined by Justice Ruth Bader Ginsburg, contrasted this ruling with the Espinoza decision last week, and focused on the vulnerabilities of women, LGTBQ people, and others affected by expanding exemptions for the nation’s religious groups.

“Recently, this court has lamented a perceived ‘discrimination against religion,’” she wrote. “Yet here it swings the pendulum in the extreme opposite direction, permitting religious entities to discriminate widely and with impunity for reasons wholly divorced from religious beliefs.”

“The inherent injustice in the court’s conclusion will be impossible to ignore for long, particularly in a pluralistic society like ours,” she added.

End of the “balanced approach”? Wednesday’s second ruling, a 7-2 decision holding that businesses and other entities can claim religious and moral exemptions from the Affordable Care Act’s contraceptive mandate, follows a similar theme, according to some justices.

There were no constitutional issues at question in the case, Little Sisters of the Poor v. Pennsylvania, and the majority held that the Trump administration’s expanded exemptions were lawful. In a dissent, however, Justice Ginsburg, joined by Justice Sotomayor, accused the court of departing from its long-held “balanced approach” to ensuring that “the religious beliefs of some [don’t] overwhelm the rights and interests of others who do not share those beliefs.”

“Today, for the first time, the Court casts totally aside countervailing rights and interests in its zeal to secure religious rights to the nth degree,” she added.

But Professor Muñoz points out that the Supreme Court also issued a groundbreaking and far-reaching victory for LGBTQ rights this June when it redefined “sex” and thus greatly expanded civil rights protections to include sexual minorities in the workplace.

“It’s hard for people to remember that, originally, the idea of religious exemptions and, you know, carving out a robust sphere of protection for religious individuals and institutions, that was liberal jurisprudence 50 years ago,” he says, noting that state and federal “religious freedom restoration acts” began as efforts to shield the religious rituals of Native peoples from certain generally applicable drug laws.

“In a way, this has been the year of nondiscrimination – nondiscrimination for progressive groups as well as religious groups,” continues Professor Muñoz. “And it’s not so obvious that this is against the wall of separation.”