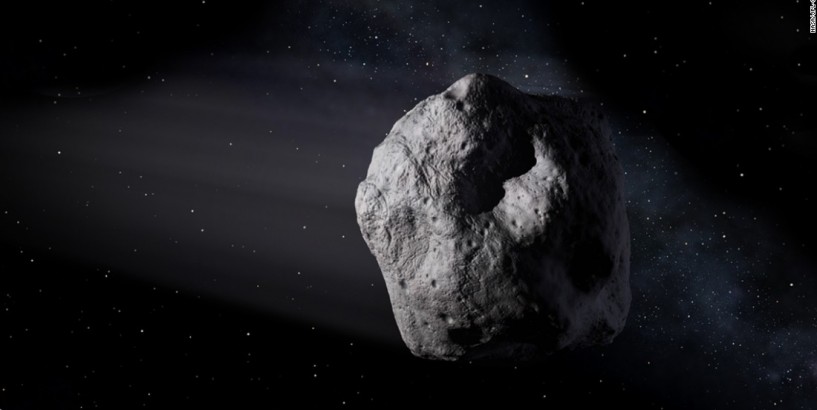 'Rare species' of asteroid spotted in our solar system

(CNN) An odd kind of asteroid has been hiding out in our solar system, close to Venus, and it took a new state-of-the-art surveying camera to detect it.

The Zwicky Transient Facility, known as ZTF, was installed on the Samuel Oschin Telescope at the California Institute of Technology's Palomar Observatory in March. Since then, it has observed over a thousand supernovae outside our galaxy, extreme cosmic events and more than a billion Milky Way stars. The orbit of asteroid 2019 AQ3, discovered by ZTF, is shown in this diagram. The object has the shortest "year" of any recorded asteroid, with an orbital period of just 165 days. "Astronomers are energized" by what the camera has enabled them to do in the first year of operations, said Shri Kulkarni, principal investigator of the camera, in a statement. ZTF is also pretty good at spotting near-Earth asteroids that zoom past our planet. Scientists want to find and catalog as many of these as they can, especially those between 10 and 100 meters in diameter. These are the asteroids that could make a severe impact if they collided with Earth. The ones coming from the direction of the sun are the most dangerous because the glare helps hide them from our view. Heart-shaped meteorite up for auction on Valentine's Day But this asteroid, known as 2019 AQ3, isn't like anything they've seen before. Quanzhi Ye, a postdoctoral scholar at the California Institute of Technology's data and science center for astronomy, spotted the images of the asteroid on January 4. Read More "This is one of the largest asteroids with an orbit entirely within the orbit of Earth -- a very rare species," Ye said. Ye reported it to the International Astronomical Union's Minor Planet Center, which officially categorizes asteroids and other objects in our solar system. His data, along with that of other telescopes around the world, helped determine the orbit that 2019 AQ3 takes around the sun. Are we ready if an asteroid strikes Earth? The asteroid is one of the first to be found that remains within Venus' orbit. It has a vertically angled orbit that takes it in a loop up and over the space where the planets orbit the sun. It has the shortest year of any known asteroid, completing its orbit every 165 days. It's also estimated to be fairly large, about a mile across. But researchers don't know the true size just yet, due to the limited data. "In so many ways, 2019 AQ3 really is an oddball asteroid," Ye said in a statement. This collision made life possible on Earth, study says This orbit takes it down by Mercury and back up right outside Venus' orbit. This inner solar system orbit, interior to Earth's orbit, makes it an Atira or Apohele asteroid -- so unique that they represent only about 20 of the 800,000 known asteroids in our solar system. But this discovery suggests that there could be a larger number of unseen asteroids orbiting in parts of the solar system, especially close to the sun, that are unknown. "These small asteroids are only bright enough to be detected during the short period that they are very close to the Earth," Tom Prince, senior research scientist at the Jet Propulsion Laboratory said, in a statement. "During this brief window, the asteroids are moving very fast, posing challenges for astronomers to find and track them." Asteroid impacts on the Earth and moon have increased since the dinosaurs lived ZTF is able to help spot these objects because its wide field of view allows it to survey the entire northern sky every three nights. In a single exposure, the camera captures an image that encompasses about 230 times the size of our moon when it's full. It's spotted around 60 near-Earth asteroids, including two in July in the hours before they zoomed past Earth. Holy Cow: Was mysterious flare in space the birth of a black hole? This new asteroid isn't dangerous, as it comes within about 22 million miles of Earth. But its location is key to helping find something that has long been thought to exist: vulcanoids, or asteroids within Mercury's orbit. During the 19th century, astronomers also believed that a planet called Vulcan existed between Mercury and the sun and that it caused anomalies in Mercury's orbit. But those anomalies were accounted for by Albert Einstein, with gravity and the general theory of relativity. ZTF could lead to telescopes that can investigate the possibility of the unexplored space close to the sun. In the meantime, ZTF is paving the way for other astronomy discoveries, like other potential sources for gravitational waves. The US government pays for nearly half of ZTF and its operations, so the observations are shared publicly in almost real time for astronomers to study. "The start of routine operations of ZTF marks a new era in our ability to capture the nightly and hourly changes transpiring in the universe," said Anne Kinney, National Science Foundation assistant director for mathematical and physical sciences, in a statement. "They are now recording real-time events from distant supernovae to nearby asteroids and are poised to discover the violent mergers and explosions generating gravitational-wave events."