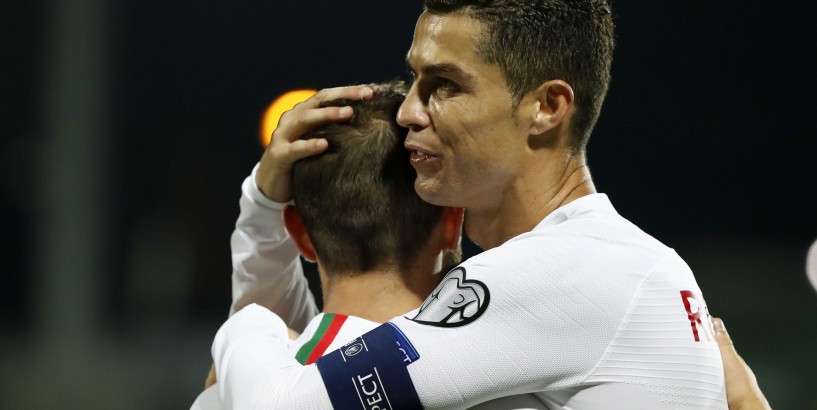 Ronaldo scored early in the first half and added three more in the second after the hosts had evened the match before halftime. William Carvalho wrapped up the scoring in stoppage time.

"I'm going through a good phase, but the team has been playing well too," Ronaldo said. "I'm enjoying this moment not only because of my goals, but also because of the team's performances in recent years. I just have to keep helping the team."

It was the second consecutive qualifying victory for Portugal after it opened Group B with two straight draws at home. It moved to second place with eight points, five fewer than leader Ukraine. Third-place Serbia, which won 3-1 at Luxembourg, has seven points.

Portugal beat Serbia 4-2 on Saturday for its first qualifying win.

"We did the hardest thing, which was to win at Serbia," Ronaldo said. "It was important to keep our momentum here. We are getting closer to our goal."

Portugal, the defending European champion, dominated throughout in Vilnius, finishing with 31 total attempts.

Ronaldo, who now has 93 goals in 160 matches with Portugal, opened the scoring with a low shot from the penalty spot in the seventh minute after a handball by a Lithuanian defender following a cross by youngster João Félix.

The hosts equalized with a header by Vytautas Andriuskevicius from a corner kick in the 28th, with the ball hitting the post before going in.

Ronaldo's second goal came with a low shot from outside the area that was initially saved by Lithuania goalkeeper Ernestas Setkus, but the ball bounced off the goalkeeper's back and went backward into the goal in the 62nd.

Ronaldo deflected in a cross by Bernardo Silva three minutes later, then added his fourth with a well-placed shot from inside the area in the 76th before being substituted and applauded by most of the local crowd.

Carvalho scored from close range in the final minutes.

Lithuania was hosting Portugal for the first time. The match was played on artificial turf at the 5,000-capacity LFF Stadium.