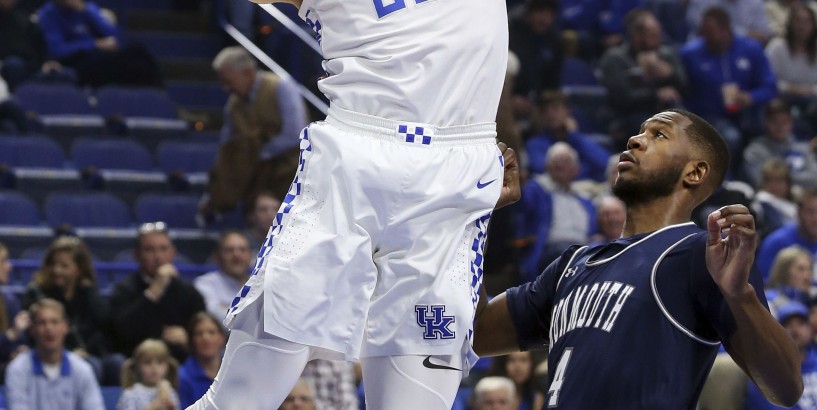 LEXINGTON, Ky. (AP) — Coach John Calipari had few complaints about No. 10 Kentucky's domination of Monmouth. The Wildcats not only shot well, they did so from long range for a change. Calipari was even more pleased by his team's defensive performance in its most complete victory this season.

The Wildcats got plenty of opportunities behind a defense that held Monmouth to 28 percent shooting, a season low for field goal defense, including 13 percent from long range. Kentucky also allowed its fewest points this season.

"I told them, this is the best we've played," Calipari said, "and it's because of what we did defensively. ... When you guard and you build confidence in yourself, you're going to be aggressive on offense, too."

The freshman guard was strong on both ends, making 6 of 10 attempts to pace Kentucky's 57 percent shooting, including 64 percent in the second half. Herro added eight rebounds and matched a career high with five steals. The Wildcats scored 28 points off 16 turnovers by the Hawks.

Asked about his defense, Herro said, "I've been taking a lot of pride in it personally. Obviously, as a team we've got to get better, but the coaches have been telling me if I can defend, it's going to be hard to keep me off the floor."

Just as impressive was Kentucky's season-best 10-of-24 shooting from behind the arc. After insisting this was the best 3-point shooting team he's had in Lexington, Calipari saw his team start to back it up.

Quade Green had four 3-pointers for 14 points, and Reid Travis scored 13 for the Wildcats.

Ray Salnave had 14 points for Monmouth, which shot just 2 of 16 from behind the arc.

Barring a collapse or struggle against UNC Greensboro, this rout should keep Kentucky in the Top 10.

Monmouth: The Hawks have played most opponents close. That wasn't the case this time as a lineup with no starter taller 6-foot-8 couldn't match Kentucky's length. They were outrebounded 40-25 and dominated 34-18 in the paint. Shooting 23 percent after halftime also hurt.

"You watch them on tape and you think you can get into some spots where you can have some success," coach King Rice said, "and then they just close those spots up very quickly. And then they beat you at the rim. It's just a different young man that you're facing (with Kentucky)."

Kentucky: After struggling to get past lesser opponents, the Wildcats left no doubt in building a good cushion by the break. More important was that everybody contributed, allowing them to stay on the gas and get a confidence-building win.

Monmouth visits Bucknell on Saturday in the second of four consecutive road games.