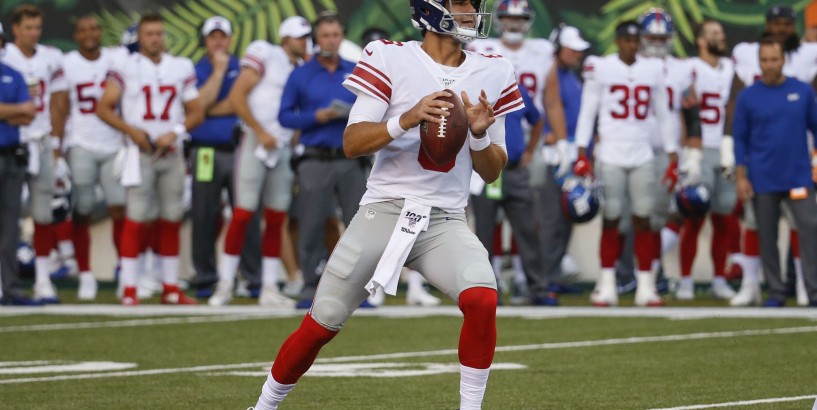 FOXBOROUGH, Mass. (AP) — This was not the return to the field that Cam Newton was hoping to make. The Carolina Panthers quarterback left Thursday night's 10-3 exhibition loss against New England in the first quarter with a foot injury that left him grimacing on the sideline.

The 2015 MVP was playing for the first time since Dec. 17, when the team shut him down for the last two games of the season because of shoulder fatigue that prevented him from throwing the ball downfield. He had arthroscopic surgery in January and did not play in the first two preseason games.

Newton appeared to be injured when he was sacked for a loss of 8 yards by Adam Butler on a third-and-10 from the Carolina 31. It was one of two Patriots sacks while Newton was in the game.

Newton was initially evaluated on the sideline and quickly accompanied to the locker room and did not return. He went 4 for 6 for 30 yards.

Tom Brady finished his first exhibition game of 2019 by going 8 for 12 for 75 yards, including an 18-yard pass to tight end Ryan Izzo to set up the 1-yard touchdown plunge by James Develin in the second quarter. It was the starting offense's final series.

CINCINNATI (AP) — Daniel Jones completed a difficult week with an encouraging performance, leading New York to a touchdown during a victory over Cincinnati in Zac Taylor's first home game as head coach.

In a GQ article published Tuesday, Browns quarterback Baker Mayfield said he was stunned that the Giants drafted the quarterback from Duke in the first round. Mayfield tried to tamp down the comment and texted Jones to explain his remarks.

Jones got into the game on the Giants' second series and went 9 of 11 for 141 yards the rest of the half. He had completions of 35 yards to Brittan Golden and 27 yards to Darius Slayton on a seven-play touchdown drive, a solid all-around showing for Eli Manning's eventual replacement.

Manning led an opening 15-play series that ended in a field goal and included five plays that gained at least 9 yards. Manning was 4 of 8 for 41 yards. In three preseason games, Manning is 9 of 13 for 86 yards with a touchdown and no interceptions.

Golden had a 63-yard punt return for a touchdown in the fourth quarter as the Giants pulled away.

Andy Dalton played three series that ended with a couple of punts and a touchdown.

Dalton found tight end C.J. Uzomah down the right sideline — he beat safety Jabrill Peppers — for a 26-yard touchdown on his third and final series. Dalton was 7 of 10 for 104 yards behind a mix-and-match line.

The game was stopped by the NFL with 11:43 remaining in the fourth quarter because of lightning after a short delay.

Carson Wentz again sat out for the Eagles, but several starters saw their first action this summer and Josh McCown made his debut after ending his brief retirement to play his 18th season.

With Ravens starter Lamar Jackson watching from the sideline and Robert Griffin III still out with a thumb injury, McSorley solidified his roster spot. The sixth-round pick from Penn State has also been practicing on special teams throughout training camp.

McSorley threw TD passes of 28 yards to Michael Floyd and 7 yards to Jaleel Scott. He scored on a run from 4 yards.

ATLANTA (AP) — Rookie quarterback Dwayne Haskins led Washington to three second-half scoring drives, including two set up by Atlanta's lost fumbles while attempting to field punts, and the Redskins took a preseason win over the Falcons.

Case Keenum played the first half at quarterback and lost a fumble which helped the Falcons lead 7-6 at halftime.

Haskins, the first-round draft pick from Ohio State, completed 7 of 13 passes for 74 yards in the second half. Colt McCoy, Washington's third contestant in the quarterback competition, is still recovering from a broken right leg suffered in 2018.

Washington running back Derrius Guice ran for 44 yards in his first game since a knee injury in the 2018 preseason ended his rookie season.

Keenum completed 9 of 14 passes for 101 yards but his lost fumble when sacked by Deadrin Senat set up a second-quarter touchdown for Atlanta. Takk McKinley recovered the fumble and ran 17 yards to the Washington 33. Ito Smith's 5-yard touchdown run gave the Falcons a 7-3 lead.

Atlanta's Matt Ryan played the full first half in his most extended playing time of the preseason and completed 9 of 14 pass for 74 yards. He was perfect in the first quarter, when he completed each of his eight passes for 60 yards.