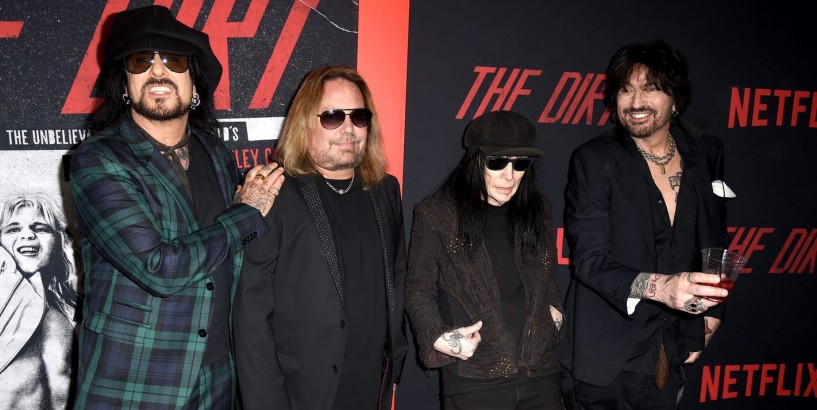 Five years after vowing they were absolutely, positively, even legally finished with touring, the guys in Motley Crue will be playing American stadiums next summer. Capping weeks of rumors and leaks, the band formally announced Wednesday it'll be hitting the road with co-headliner Def Leppard and fellow rockers Poison and Joan Jett. The Stadium Tour 2020, as they're calling it, was announced at a Hollywood event with the bands, hosted on SiriusXM's Volume channel by Slim Jim Phantom of the Stray Cats. The decision marks a big-time walk-back by Motley Crue, who staged a farewell tour in 2014-2015. At the time — aware of rock's long history of broken goodbye promises — the quartet swore that band members had signed a binding contract to prohibit them from future performing. That tour played to more than a million concertgoers, who thought they were getting a final glimpse of the iconic glam-rock group. "Honestly, I don't think any of us, when we were on the final tour, thought we would ever get back together," bassist Nikki Sixx said Wednesday. "We weren't really getting along at that point. ... When we came to the end, we broke the band up and went our separate ways." Mainstream interest in the Crue was reignited earlier this year with "The Dirt," a film based on the band's spicy 2001 memoir. It was during the making of the movie that band members reconnected, Sixx said. "We realized how much we missed each other, and that got us to go in the recording studio," he said. "We had a blast in the studio, the movie took off, and our fans are super stoked, but we've also got a new generation of people." Word of a pending tour with Def Leppard was leaked in November by Black Crowes manager Mark Didia. Motley Crue fueled the flames with a Nov. 18 video depicting the detonation of its "Cessation of Touring" contract. Crue drummer Tommy Lee said production design started earlier this week. "There's a lot of new technology right that we haven't gotten a chance to play with," Lee said. Sept. 5: Los Angeles – Sofi Stadium