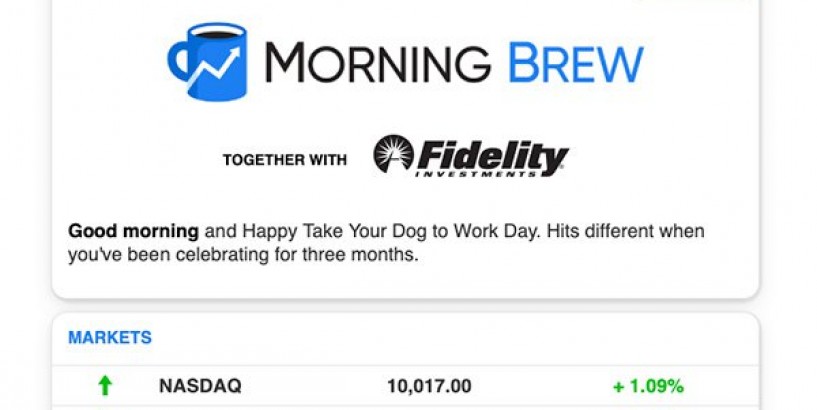 by Melynda Fuller , 5 hours ago

Morning Brew has seen its audience and franchises increase significantly over the past couple of years, hitting a milestone of more than 2 million readers across its flagship Morning Brew newsletter earlier this year.

On Monday, the brand will launch a new marketing and media newsletter: Marketing Brew will be add to its portfolio.

Sailthru signed on as Marketing Brew ’s first brand partner ahead of the launch. Sailthru has been a longtime partner of Morning Brew , helping it to measure success across 19 newsletters and as an advertising partner across other franchises.

Jason Schulweis, senior vice president and head of brand partnerships at Sailthru, noted the company has so far seen the most success with Morning Brew’ s newsletter Retail Brew .

“Sailthru speaks to marketing decision-makers that work at brands,” Schulweis told Publishers Daily . “ Marketing Brew goes even further into that core target, with brand marketers, growth marketers, and agency and media operators making up the majority of the subscribers.”

As it gears up for another newsletter launch, Morning Brew has plans to more than double its editorial team, adding 15 new staffers this summer. Staff boosts will impact each franchise, with additional team members added to support product development, sales and the company’s social-media team.

“ Morning Brew has seen a significant amount of growth over the last few months in terms of subscriber numbers. By expanding the editorial team, we are creating greater value within our newsletters, deepening the existing relationships with audiences,” Alex Lieberman, CEO-cofounder, Morning Brew .

Like most publishers, Morning Brew has had to look at its place in the media landscape, even as it continues to grow during the COVID-19 pandemic.

“We are thinking differently about the media landscape. While our mission is still the same, we’re upping our content offerings — delivering more podcast episodes and dipping into opinion pieces from industry experts," Lieberman said. “Looking toward the future, we see Morning Brew ’s role in readers’ lives continuing to expand into other forms of content and entertainment. Marketing Brew is just the beginning.”